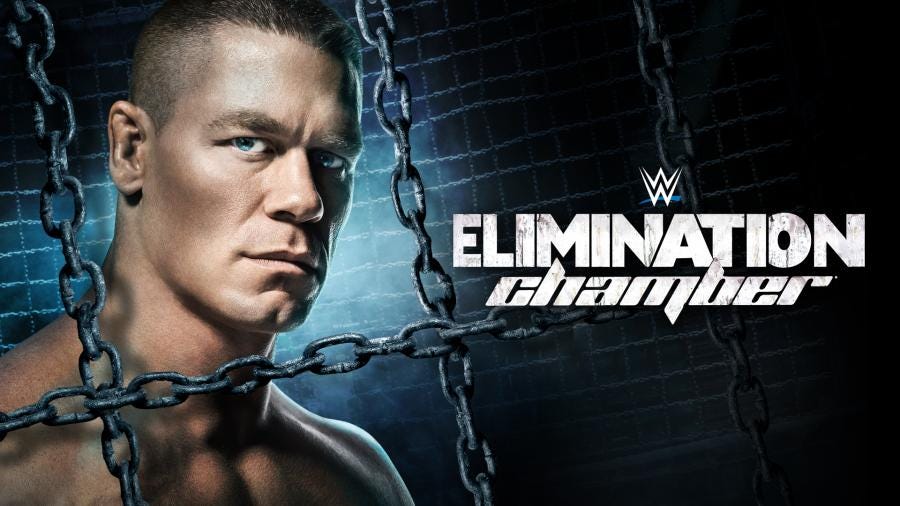 Hell of a weekend coming up for the real and fake graps, with UFC 208 on Saturday and WWE’s Elimination Chamber on Sunday, and I’m here to break both down for ya.

(If you’re a German stoolie, the show I’m talking about here is called “No Escape”, because “Elimination Chamber” has a much different meaning for you guys.) 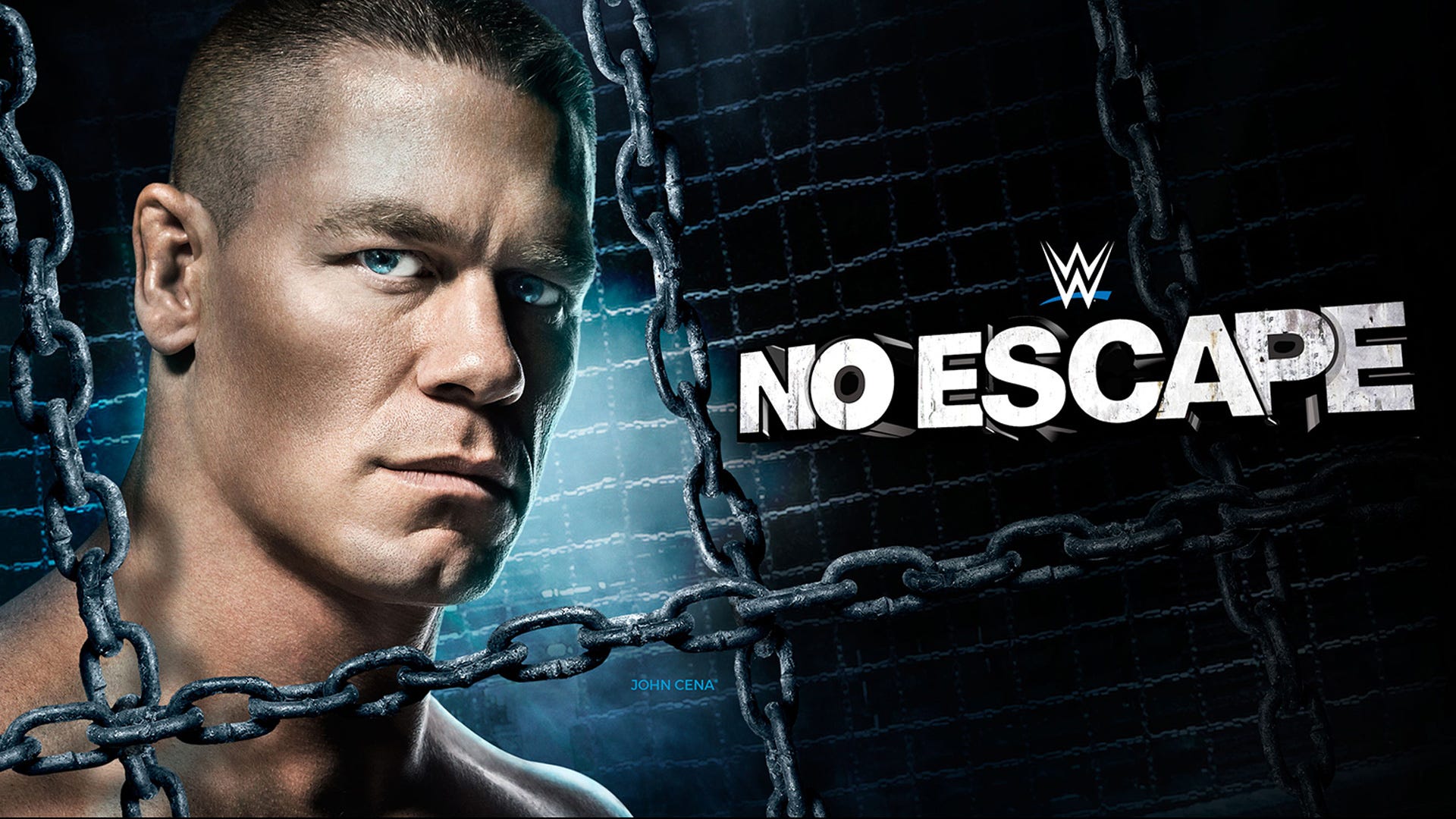 Elimination Chamber matches, for the most part, are pretty great, and you should expect no different here with the talent and angles involved. Going in, we’ve got The Miz being an absolute savage to GM Daniel Bryan, like he’s been for months, John Cena attempting to successfully defend his title for the first time during this historic reign, Dean Ambrose looking to become a double champion, AJ Styles looking for redemption, and uhhh, Baron Corbin and Bray Wyatt are also gonna be there!

Ultimately, this match will set up the majority of the WrestleMania card on the SmackDown end, and it’ll be really intriguing to see how it’s done.

I think Bray Wyatt wins, setting up the family feud they’ve been teasing for months as the marquee SmackDown title match. Somehow, some way, The Miz will be the cause of John Cena’s elimination to spark a mixed tag team match between the two and their ladies. I’m not sure where Ambrose and Corbin will end up, but it’s possible they’ll be pitted against each other I suppose. AJ will probably make it far into the match and lose to shenanigans so he has a reason to be angry at Commissioner Shane McMahon…yes, apparently that’s where they’re going.

If I had it my way, I’d have Cena retain and face Orton in the main event of WrestleMania. I know, I know, we’ve seen it a thousand times (20 times), but it’s never happened one on one at the “Showcase of the Immortals”, and it’s always great. I’m also not the biggest fan of Cena dropping the strap in his first defense, especially after the instant classic we saw at the Rumble.

This is classic Vince matchmaking. He kind of doesn’t know what to do pre-WM with the SmackDown Women’s Title, so he accidentally made it the least important women’s match on the show. Becky Lynch and Mickie James will steal the show and sell the intrigue for the title with their singles match, and Nikki Bella will be the Queen Of Strong Style (what’s not to love). Alexa will absolutely retain so Becky can win the big one against a heel, and I wouldn’t expect much from the match itself despite the quality of their work prior. 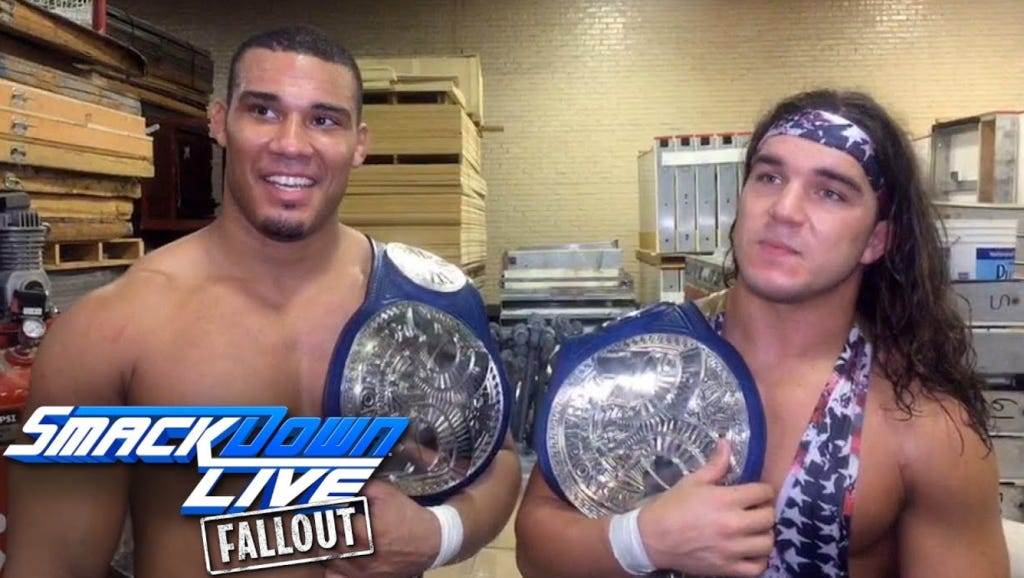 If you’re unaware, Tag Team Turmoil match starts with two teams, one gets eliminated, another runs out. This could be, like the last match I spoke about, a filler to keep everyone busy until the show of shows, OR it could be an avenue for a debut. I think it’s the latter, because it’s the perfect opportunity to bring up The Revival from NXT. Too perfect. Alpha goes through every team, think they won, and “WE GO HARD” hits. All of the previous meetings between the teams have been phenomenal, and that’d be the route for Mania for sure.

Other thoughts and predictions:

I think after the Chamber itself, Becky Lynch vs Mickie James will be the match of the night. Two veterans who both know how to craft a story in the ring. Very excited for this one.

Randy Orton and Luke Harper should be interesting, because the heel/face dynamic is fresh and Orton has to swap in the near future. Plus, their brief encounter at the Rumble was fucking awesome. Orton should go over here.

I don’t care about the handicap match enough to even mention those involved. Boo.

Mojo Rawley vs Curt Hawkins – Shout out to them for cashing a PPV paycheck.

Nikki Bella probably goes over quickly in her match with Natalya, being she’s in the mainstream attention match on the grandest stage of them all.

Overall, it has potential to be a very good PPV with exciting matches and continuing the story lines that they craft so well on Smackdown. Could very well be a top PPV of the year, because everything Smackdown is doing right now is gold. Raw is once again going to feel like the stinky kid in class after this one.