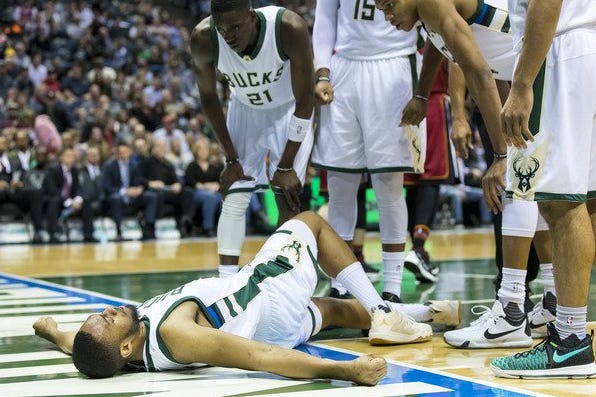 Man does that suck. You knew this was probably the result immediately after watching that clip. Non contact injuries are the absolute worst (and reason for my Avery fear). It sucks even more that this was the exact same knee. After tearing his ACL for the first time in 2014, and having an OK year last year, Jabari Parker was absolutely balling so far in 2016-17. In fact, it was the best year of his young career. Averaging a career high in points, rebounds, assists, three point shooting, PER, you name it and Jabari was doing it well. You could say he was in the middle of taking that Year 3 leap we talk so much about. The Bucks as a team kind of suck, but that’s not really the point of this blog. When shit like this happens, I think we all put our personal fandom aside. I could give a shit that this basically prevents BOS from potentially seeing the Bucks in the playoffs, as a fan of the league and of the sport, this is absolutely brutal.

A few weeks ago Zach LaVine’s season ended with a torn ACL as well, and while that sucked too, the Timberwolves weren’t exactly going anywhere. This Parker injury sucks not only because of the year he was having, but because the team FINALLY got Khris Middelton back for the first time all year. That is some messed up Basketball Gods shit right there. Get one key piece back, and in the same game lose another key piece for the season and most definitely part of next year too. With the East wide open you could have talked me into the Bucks getting back on track and snagging one of the lower seeds if they were fully healthy. A trio of Greek Freak/Parker/Middelton is pretty good on paper, and it really is unfortunate for basketball fans everywhere that we won’t get to see it.

You know this injury is a little different when the entire basketball world reacts. I don’t really remember this happening when Rondo tore his ACL that one year. Just a few I’ve seen so far…

Here’s to a quick recovery and hoping that he is able to return to the type of player we saw this season. In 2017 this injury is pretty routine, but when you start talking about multiple surgeries on the same leg, even as a young player, you never know how that can impact your career moving forward. God that would suck.