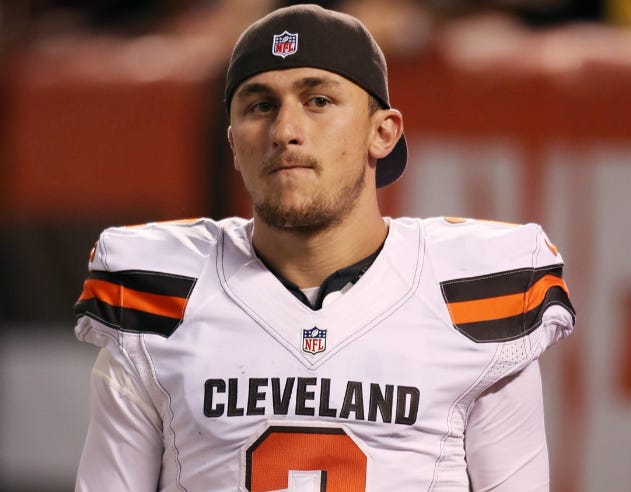 Quarterback Johnny Manziel wants to get back to the NFL. He apparently realizes that, before he can get there, he’ll need to show that he can thrive in a lesser league.

And so he reportedly has worked out with the CFL’s Saskatchewan Roughriders, according to the Hamilton Spectator. The workout, if it happened, violates CFL rules, because the Hamilton Tiger-Cats hold Manziel’s exclusive negotiating rights. (The Roughriders denied that a workout occurred.)

“The rules regarding the [negotiating list] are outlined in our by-laws,” a league official said, per the report. “A team has exclusive rights to a player on their [negotiating list]. Therefore that player could not be contacted by, worked out by, or negotiate with another club unless consent is given.”

It’s happening. The Johnny Football Comeback Tour is in full swing as it’s being reported he worked out for a CFL team in Saskatchewan. Only issue here is that this team didn’t hold the rights to do so and will probably face some consequences, but Johnny doesn’t care about that. He’s just trying to get the word out as much as possible that he can still play football. Is it concerning he looks like he’s only 150 lbs in any video you see him in? Sure, not great, but he’s “sober” at least…right? Didn’t you seem him on stage at the Barstool party holding a water bottle that definitely had water in it? New year, new Johnny. He’s honestly following the “Barstool Sports Definitive Steps to Get Back Into The NFL After Becoming An Alcoholic And Drug Addict”. It’s a very complex list of steps, but Johnny went to a prestigious educational institution like Texas A&M for two and a half years so he’s more than capable of following along.

The Barstool Sports Definitive Steps to Get Back Into The NFL After Becoming An Alcoholic And Drug Addict
1. Do a pizza review with Dave Portnoy
2. Go on Twitter and send out numerous self-motivating, inspirational tweets calling out the haters #LostInTheSauce
3. Delete Twitter
3. Hang out with Club Dave in Miami
4. Use your Snapchat to show you’re on the beach in San Diego running 24/7 (staying in shape)
5. Participate in the Barstool QB Camp

6. Team up with an up and coming receiver that can bail you out with amazing catches in tight spots

*Automatically back in the NFL

It’s a fool proof 100% guarantee process and it looks like he’s 70% of the way done. Gotta tip your cap to Manziel here for 1) not being dead 2) deleting Twitter 3) not being dead

P.S. If you don’t think Johnny will be back in the NFL you are a goddamn fool. This is going to be the most Cleveland Browns thing to happen in the history of the Browns. Draft polarizing star to revitalize franchise. Becomes an absolute degenerate and drops out of the NFL. Returns with another team a few years later, sober as an ox and wins the Super Bowl. Same with Josh Gordon. He’ll be back before you know it catching touchdowns from Tom Brady. Good things and the Cleveland Browns don’t make sense in this universe.