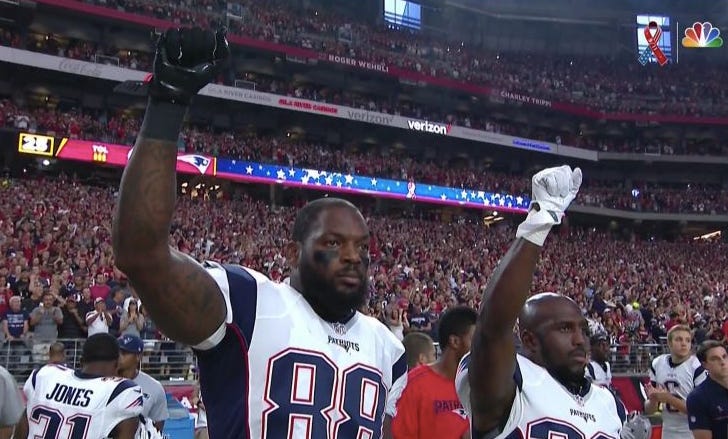 (Source) – Bennett and McCourty’s refusal to meet Trump at 1600 Pennsylvania Avenue isn’t shocking. They aren’t the first black athletes to show disdain for the Twitter president and they won’t be the last. In fact, it’s mainstream not only for black athletes but for most musicians, entertainers, and young people of all colors, genders and stripes to be anti-Trump. It’s not like there aren’t myriad reasons to dislike him.

However, as is always the case, there are those (mostly male, white and conservative) fans that aren’t pleased whenever athletes express opinions that don’t line up with their own. Already some – from the usual Twitter eggs to pro wrestler Matt Striker – are chastising Bennett and McCourty.

What makes Bennett and McCourty’s critics look bad is how silent they were when Tom Brady produced the sorriest excuse ever in citing “family commitment” for not attending the Patriots’ White House trip to meet Obama two years ago. (Brady was apparently unhappy, of all things, with a joke about Deflategate.) Those critics were also silent when another Boston sports champion, then Bruins goalie Tim Thomas, didn’t hide his Tea Party views and dislike of Obama when he refused a White House trip with his team in 2011.

I know these are things we’re supposed to ignore. We’re supposed to shake it off, admit that racism is a problem in Boston like it is everywhere else in the country to some degree, and we’re supposed to go on about our day. But ever since the Super Bowl I’ve seen these straw man arguments pop-up that talk about the “critics” that Bennett and McCourty (and now Dont’a Hightower and Chris Long have also said they won’t be going) are facing. Critics that have, apparently, never said a thing when other athletes opted to steer clear of The White House.

First of all, the headline of this article was total clickbait. “Martellus Bennett and Devin McCourty have the courage Tom Brady lacks,” is definitely something that gets your attention, only problem is the author never once addresses that explosive headline. He never goes on to call Brady a coward or suggest that Brady stand with his teammates or anything at all. Just an in your face, boisterous eye-grabber then nothing to expand on it. Aside from that, his “sourcing” of “critics” is an unknown, at least to the layman, professional wrestler and “twitter eggs.” If using garbage Twitter sources and a clickbait headline is your big idea for a story then maybe you’re more suited for Buzzfeed rather than actual journalism.

Second that last paragraph the most incorrect paragraph that has ever been written. I could say in this one that I’ve got a huge dick and am a marvelous writer in this one and it will still be more factually accurate than that drivel. Critics were silent about Brady not attending? He was the story on every sports talk show for days. Silent on Thomas? He was a story for like a fucking year and got run out of town. Those were actual critics, with credentials, and a voice that you didn’t have to Twitter search key words to find condemning them. That’s real criticism and to call them silent compared to an oiled-up, juiced-up wrestler and some anonymous Twitter idiots is a joke.

Don’t get me wrong here, I’m not saying that Bennett and Co. should face criticism. They absolutely should not. I stand with them on their decision and completely understand it, as does the rest of New England. It’s totally bogus to claim that anyone of note, or any substantial number of people, don’t support them. But, you’ll continue to read articles like this for the next few days because sports aren’t on and bitching about bullshit is more important to the sustenance of human life than water and oxygen are.