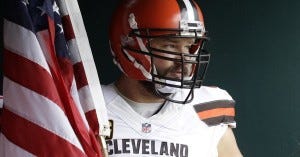 PFT – Browns left tackle Joe Thomas said before the Super Bowl that he was rooting for the Patriots for one specific reason: He wanted to see NFL Commissioner Roger Goodell have to award the Vince Lombardi Trophy to the franchise that hates him most. Thomas was not disappointed.

Thomas said this morning on PFT Live that he loved every moment of the Super Bowl LI postgame ceremony, in which Goodell honored the Patriots to a chorus of boos, and then retreated from view.

“I especially enjoyed how over-eager Roger was to smile at all the Patriots and give them a big handshake, but then as soon as he gave them the trophy he scurried off the stage like a rat,” Thomas said. “It was awesome.”

This is how revolutions begin. Or to put it more accurately, this is how small acts of defiance grow into revolutions.

A year or so ago, words like this would have gotten Joe Thomas killed. But now a guy like him is emboldened to speak out against a tyrant like Roger Goodell because he’s seen men of courage on the Patriots do it and live to tell the tale. Matt Patricia getting off the plane from Houston in a Barstool Goodell Clown Nose shirt. Danny Amendola wearing a Barstool Fire Goodell hat at the parade. Gronk leading the crowd in booing Goodell at the Dunkin Donuts center rally. It’s the kind of bravery that inspire others. And can turn an angry, oppressed few into a full blown insurrection.

Goodell is President Snow, and the Patriots went full Mockingjay on his ass. And once you get the best left tackle of his generation and a first ballot Hall of Famer feeling like he’d rather risk death or imprisonment or holding flags raining down on him like hailstones for the rest of his career, it means the revolution is spreading beyond our little District 11 up here in the Northeast.

Does this mean, Goodell will be out of a job or any less of a powerful despot? Probably not. But tyrannies can’t function if nobody fears them.