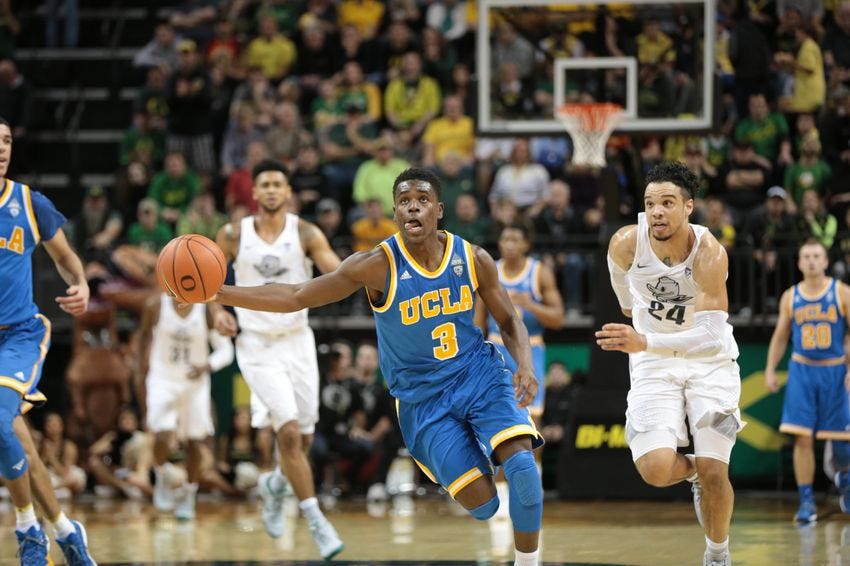 After the UNC/Duke game, make sure you stay up and watch arguably the two best teams in the Pac-12 (it’s truly a toss up between these two and Arizona) as Oregon heads down to Pauley Pavilion to play UCLA. Earlier in the year we got one of the iconic shots of the season as Dillon Brooks hit this shot to give Oregon the win and really help solidify the season after a somewhat disappointing start:

It was a truly even game, especially when you dive into the stats. Points per possessions was won by UCLA at 1.05 to 1.03. Rebounds went to UCLA 34-32. The difference was Oregon had an assist to turnover ratio of 2.11 compared to 1.36 which is shocking when you consider UCLA has Lonzo Ball on the team.

With it being one of the first times we have a major matchup that’s a rematch, I want to take a look and break down what we saw in the first game and how it can translate tonight. The biggest takeaway from the first game? UCLA’s inability to defend. Everyone on Oregon had an ORtg over 100 as they shot 51% from inside the arc.

Oregon had 86 possessions in the game and just put UCLA in constant screen and rolls. They ran 24 sets in the pick and roll, with 15 of them coming in the second half. You’ll notice a trend with the two clips below of the PnR that led to an open three and an easy layup. It’s attacking Bryce Alford. Alford is on the ball in both possessions. On the 3 Alford just chases the ball, instead of fighting under the screen while Leaf gets caught flat-footed in the lane. Something that’s way too common for him. On the second possession, UCLA tried to get creative with Ball on Brooks but Oregon sets up a double screen for Pritchard. Again, Alford gets caught chasing while Welsh is frozen trying to hedge and take away the roll.

In this still shot, look how far back Alford is and how he’s ‘fighting’ over the screen. It’s just lazy and/or bad defense by UCLA. 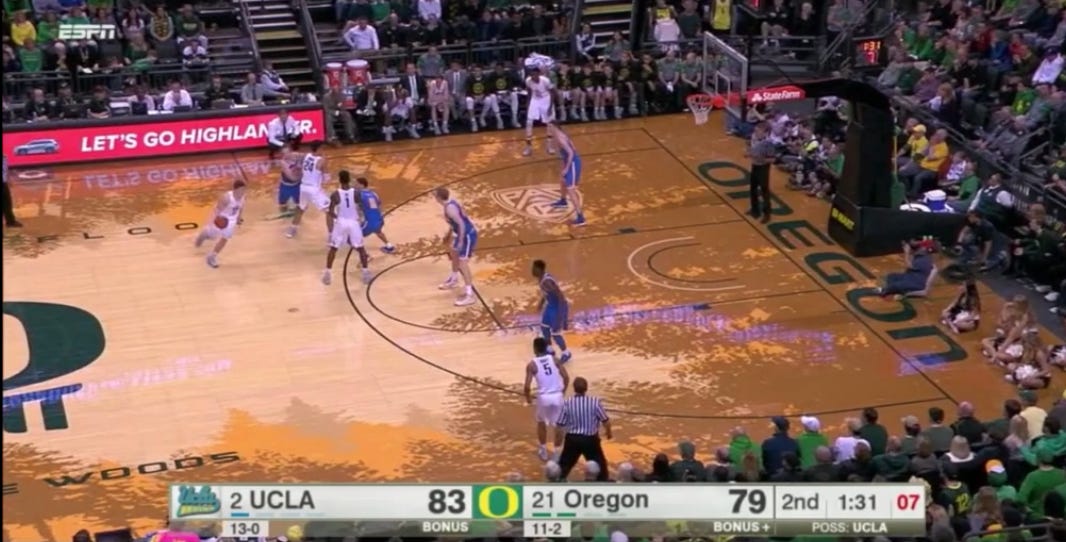 What happened though was this did turn into the Dillon Brooks show, because he’s such a mismatch when healthy. UCLA has to decide how to guard him and he took over this game, despite having four fouls. He finished the game with 23 points and looked like the best player out there. Going back and watching his scoring plays by themselves, one play design that I really enjoyed and would expect to see tonight is this one getting him into an ISO set against Isaac Hamilton. Brooks starts on the side of the floor by himself before moving to the elbow where Bigby-Williams sets a screen for him to pop up to the top of the key to get the ball. After the jab, Bigby-Williams clears out and Brooks has the entire left side of the lane to work. No one on UCLA is sticking with him in this situation.

For UCLA, it’s all about running on offense and Oregon limited them to just 14 possessions in transition in Eugene. Now in the halfcourt, UCLA did look to Thomas Welsh as he and Alford led them with 20 points a piece. Welsh is an interesting player because of his size and ability to step out and consistently hit 12-15 footers. Here’s him doing just that and what this does is allow the lane to stay spread for Ball/Holiday/Hamilton/Alford to all drive and either finish or kick. With Welsh playing the 5 spot and Leaf able to shoot 3’s from the 4 spot, defenders have to decide to protect the rim or give up that open look. It’s part of what makes UCLA’s offense so good.

Then there’s obviously Ball, who is an All-American and one of the, if not the best point guard in the country. He had a strong game the last time out with 14 points, 6 assists (just 2 turnovers) and 3 rebounds and hit three shots from behind the arc. Defensively, he got stuck, sure. But, it’s the offense like this that helps break Oregon’s defense. The Ducks will throw zone in with their man-to-man but with the range that Ball and Alford have, it’s easy to shoot over the top. You can see it here from an out of bounds play, where Ball is able to shoot a good 5 feet from behind the line.

If Brooks continues to guard Ball, look for him to try and ISO like they did at the end of the game in Eugene. Ball isn’t going to kill you with dunks at the rim, but he’s creative enough with his dribble, has good size and knows how to finish in a variety of ways to beat the bigger Brooks. With Welsh and Leaf on the court, the floor is completely spread and Ball is able to use a couple crossovers and changes in speed to set up the spin move layup. That’s the matchup Ball and UCLA will look to exploit.

Oregon needs this game to stay alive for a No. 1 seed. It’s hard to imagine anyone but Gonzaga getting the No. 1 out West, but Oregon can sneak to that top line if the bracket breaks right. They are coming off a blowout win over Arizona and would stay ahead in the Pac-12 race. UCLA would drop to 4 losses in conference and would be tied for fourth.

Pick: Oregon is getting 5, which seems like a lot in a game that is a tossup. I personally don’t love either side here, as Oregon could have a little hangover from Arizona. But, I’ll take the points and pray for another buzzer beater.