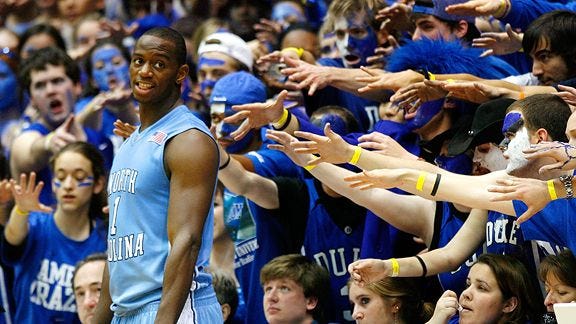 It’s easily the most anticipated game of the night. Whenever you hear Duke vs UNC, ears go up, Dickie V gets a boner and people tune in to watch.

Unfortunately we won’t get to see this game at full strength as Theo Pinson is still unlikely to play as he battles a sprained right ankle. Roy Williams said yesterday that Pinson was doing some individual work but hasn’t been doing stuff with the team during practice.

We’ll take a look at what to expect from each team including matchups to watch. We’ll start with North Carolina’s offense as the biggest mismatch on paper is.

– North Carolina doesn’t just get offensive rebounds. They make you pay for giving them up. They currently are scoring 1.117 points per possession after getting a board. What makes Carolina so good at this is the fact its bigs don’t bring the ball down after the offensive rebound and have a quick second jump. There’s no delay in getting the ball back up, which is a huge advantage and not something most collegiate players excel at. Watch both Kennedy Meeks and Tony Bradley here.

– When you’re not focusing on the offensive rebounds, there’s the backcourt play that can absolutely kill you. Justin Jackson has silenced a lot of critics this season by becoming the thing everyone knocked him for. He’s now consistent. He’s not disappearing in big games or struggling through the middle part of the season only to have a decent run late and get the hype train for the following season. All of his numbers are pretty consistent when you look at overall vs ‘Tier A’ teams.

-Jackson is killing teams in spot up shooting and in the pick and roll – scoring over 1.13 points per possession in both sets. Jackson does like to use that floater when he gets into the lane, which a) makes his shot pretty tough to block and b) gives the big guys a better chance at grabbing the offensive rebound. When he misses, it usually bounces softer off the rim, allowing Meeks/Hicks/Bradley to work. Watch him attack both the lane here and pull up for a 3 off the pick and roll.

-Expect nothing but pick and rolls when Harry Giles is in the game. He often gets lost defensively in these situations and struggles with the lateral movement as he gets used to playing after knee surgeries. If I were Duke, I’d run only zone whenever Giles checks in for Jefferson.

– Berry (and Jackson for that matter) should be able to give Duke fits by penetrating into the lane and looking to kick. Duke absolutely struggles to defend ball handlers. What Duke teams traditionally do well though is guard the 3-point line. This year is no different as they rank 10th in the country, giving up just 30% shooting from three.

– For Duke offensively, it’s predicated on the new decision to trout out the smallball lineup, which is the smartest thing they can do. Duke has limited its rotation, squeezing out Marques Bolden essentially. They are playing Jayson Tatum at the four spot, surrounding Jefferson and Giles with four other guys who can shoot.

– Tatum is running a similar position as Dillon Brooks at Oregon, except Tatum is a better rebounder. He’s going to be undersized in nearly every matchup, but he has the strength to hold his own against them defensively while still maintaining the glass. Granted Notre Dame is a shorter team, Tatum did get 14 rebounds in that game.

– On the offensive side of the ball Tatum thrives in the ISO set, which isn’t shocking considering he’s a little bit of a ball stopper. However, with this smallball lineup, it’s not as bad of an idea for him to be in ISO with the mismatches he gets. If Pinson doesn’t play this is where Tatum can take advantage of having a slower player on him. They will run Tatum in these semi-Carmelo sets (remember K has worked with Melo for the last 8 years). Against Notre Dame here they get him with that high post up, as Jefferson sets a back screen for Kennard, creating space for the lane to be open. Tatum takes that jab step before the one dribble explosion to the basket. It’s right out of Carmelo’s playbook.

– What’s gotten lost over the last couple of games is the rise of Grayson Allen. Over the last three games, Allen is averaging 20 points/5.5 rebounds/4 assists per game while shooting 44.6% from three. When he’s locked in like this he’s one of the best players in the conference and makes Duke that much dangerous, because he becomes a playmaker that can score. Duke continues to run this offense without a pure point guard (Jackson is the de facto point here) but Allen has taken the role of distributor by getting into the lane and looking to kick to Kennard.

– There are two sets that Duke will kill you in and it’s no surprise. The first one is spot up shooting – by far what Duke does the most. This will only continue to rise with the smallball lineup. But the Blue Devils rank in the 90th percentile in spot up shooting and 99th percentile in the pick and roll. Duke loves to penetrate and kick to the spot up shooter, as seen here against Notre Dame. In the PnR set, Duke loves to set the high screen. That helps keep the floor spread and gives Jefferson room to roll. I wouldn’t be surprised to see Tatum involved in a lot of PnR tonight, as both the screener and the ball handler. Duke could bring up both of Carolina’s bigs, making them play in the screen and roll together with Tatum as the ball handler, or depending if Carolina’s bigs go under the screens, Tatum could come out and set the screens for Allen and Kennard.

Pick: This is going to be a close game, but I’ll take the team who I think is better (UNC) getting the +3 even with it at Cameron. I think the bigs will just be to effective tonight for UNC and will be able to keep Tatum at the 4 in check.