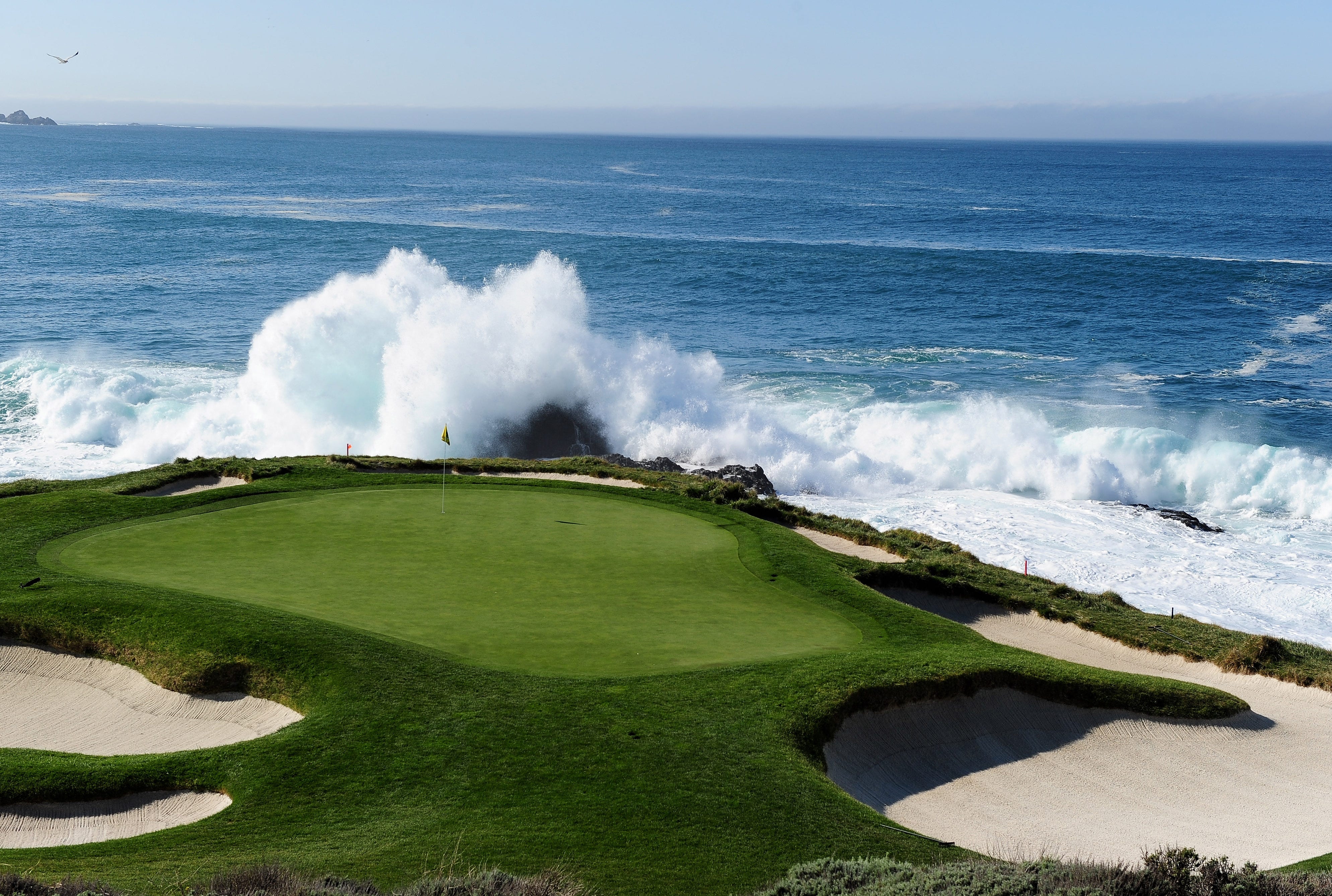 Pebble. Beach. Anytime we return to this venue, we win. Easily the world’s greatest combination of beauty, history, and legitimacy, Pebble Beach is perhaps the most famous golf course in the world. It’s one-of-a-kind. It’s magical.

We’ll see countless B-roll of the cliffs, the ocean, the waves, the rocks, and we’ll love every second of it. It’s the AT&T Pebble Beach Pro-Am.

This week’s episode of Fore Play is live and it’s spectacular. Our funniest show yet. Guest Willy Wilcox — a famous hole-in-one celebrator at Sawgrass’ 17th — provides funny and fascinating insight into the world of a pro golfer working his way up through the ranks, eventually earning his way onto the PGA Tour.

New ep is live featuring famous hole in one celebrator @willwilcoxgolf and we detail how you can win a green jacket https://t.co/MSni8WQesk

The Fore Play boys talk finding out that Tiger withdrew in Dubai pic.twitter.com/UfW3QQ2cdG

This is the most famous pro-am in the game. From Bill Belichick to Bill Murray to Wayne Gretzky, dozens of celebrities will spice up the field and make things interesting.

Begun in 1937, the AT&T Pebble Beach Pro-Am is one of the staples of the Tour. One of the staples of the West Coast Swing. First won by Sam Snead in San Diego for a cute little payday of $500, the event moved up to Monterey after World War II, in 1947. It then became a three-course tournament, played at Pebble Beach Golf Links, Cypress Point Club, and Monterey Peninsula Country Club. After multiple substitutions and rotations, it’s now played at Pebble, Spyglass, and Monterey Peninsula CC. 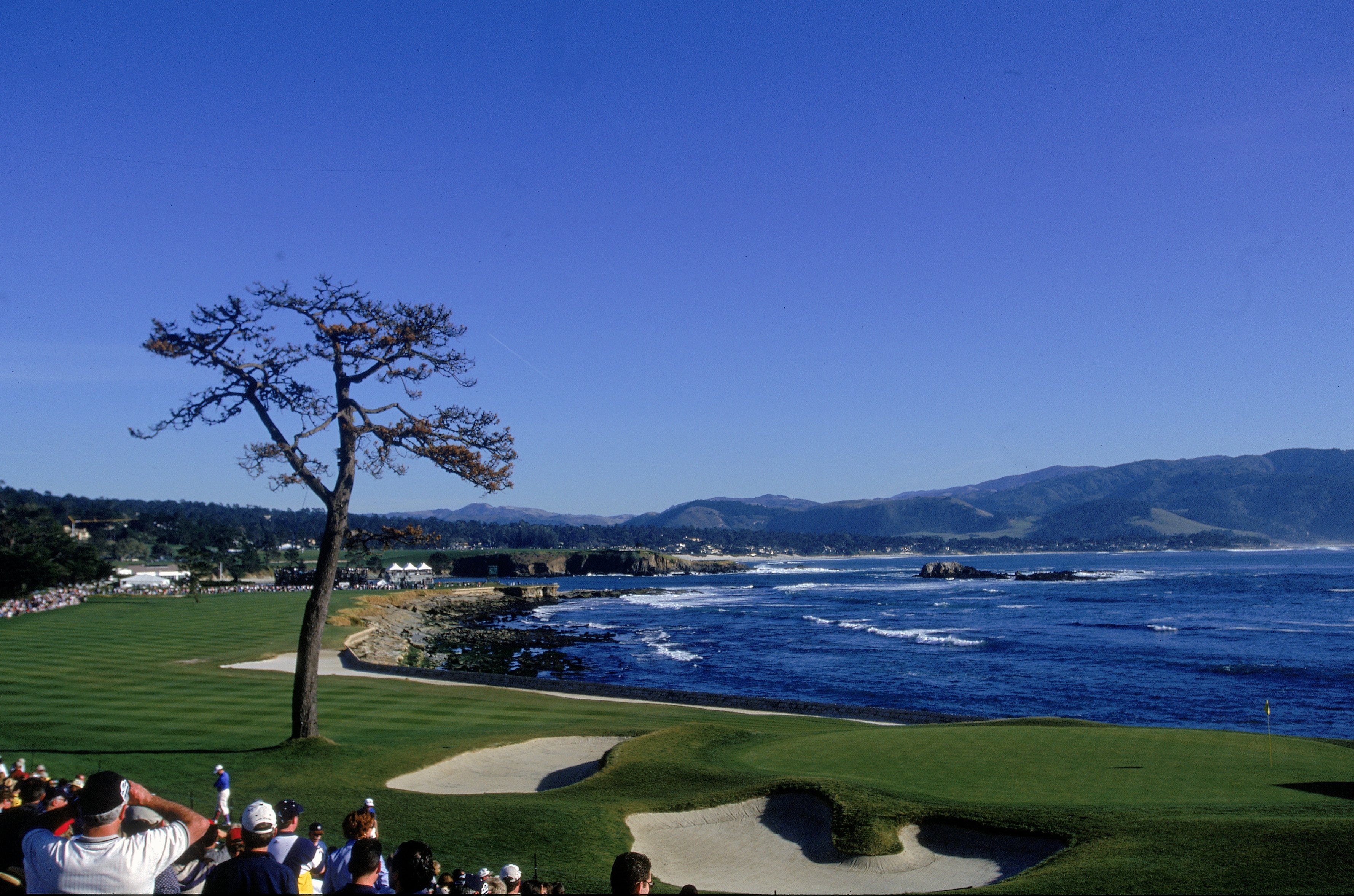 Pebble Beach is Pebble Beach. If you don’t know it by now you either 1) clicked on the wrong blog, 2) did not own a video game console and the Tiger Woods game franchise in the 2000s, or 3) are dumb. This course has been well-documented and you should know every blade of grass.

And you should be able to break 55 on the video game. Maybe 50 if you’re hot. 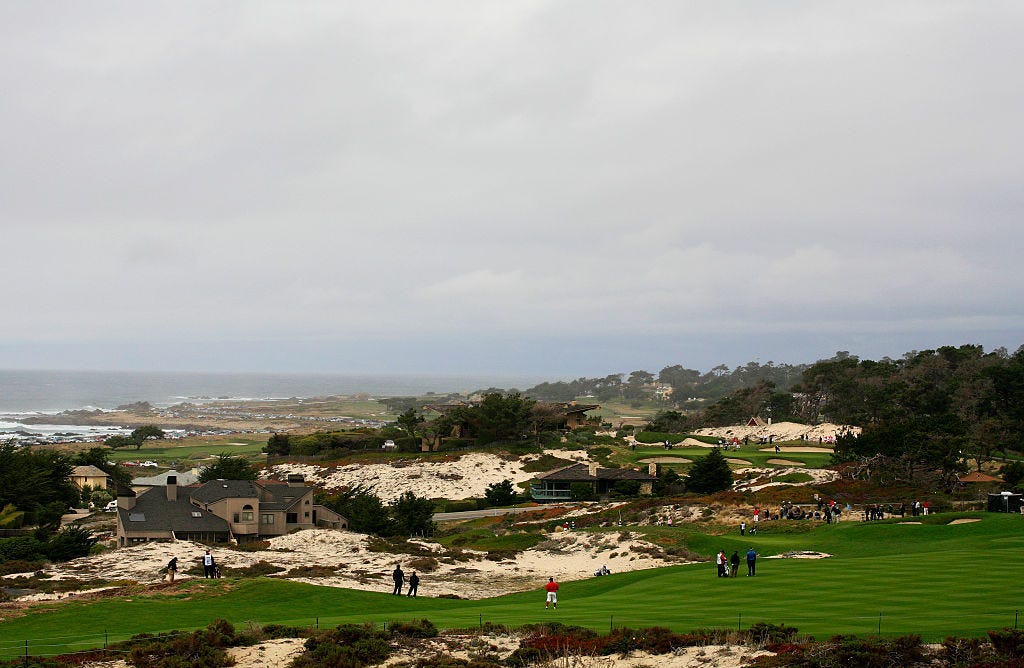 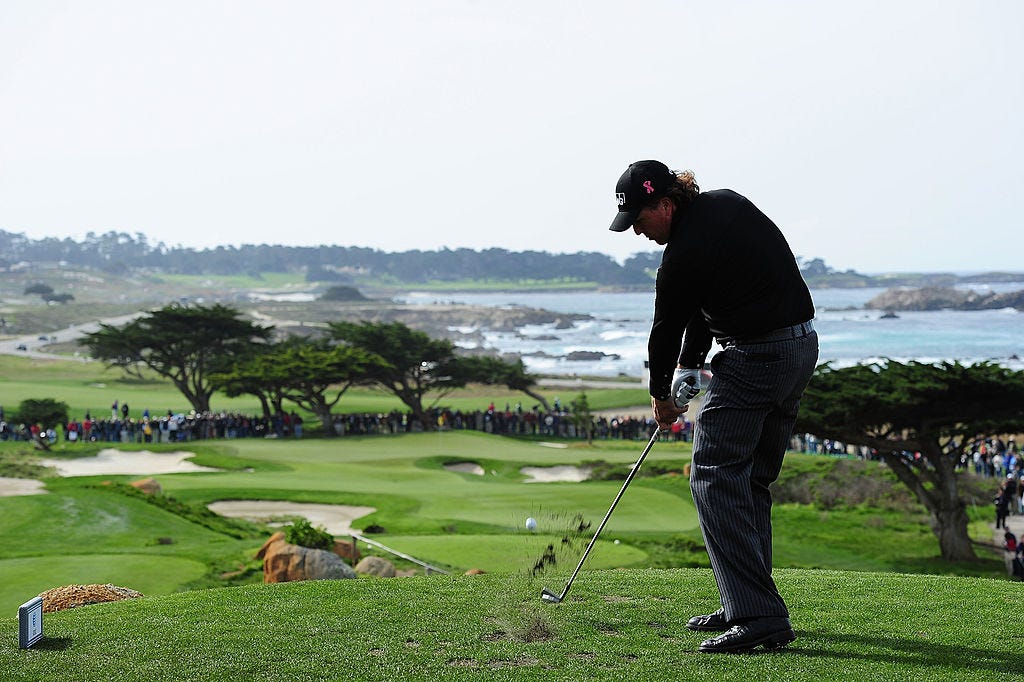 Monterey Peninsula is a private club with two tracks. In 2010, the Shore course officially became part of the AT&T pro-am. Players love it and tout its “artistic” holes and spectacular views. It’s not a bad place to play golf.

It too is less than 7,000 yards, but no joke. I would like to golf/take photographs there.

In conclusion this entire area is fucking spectacular. It’s a lovely place to play. Have I? In reality, no. In virtual reality (video games), absolutely. A billion times, and I’ve ripped it up.

The players play each of the courses once Thursday-Saturday, at which point there’s a cut, and those remaining return to Pebble for the final round. 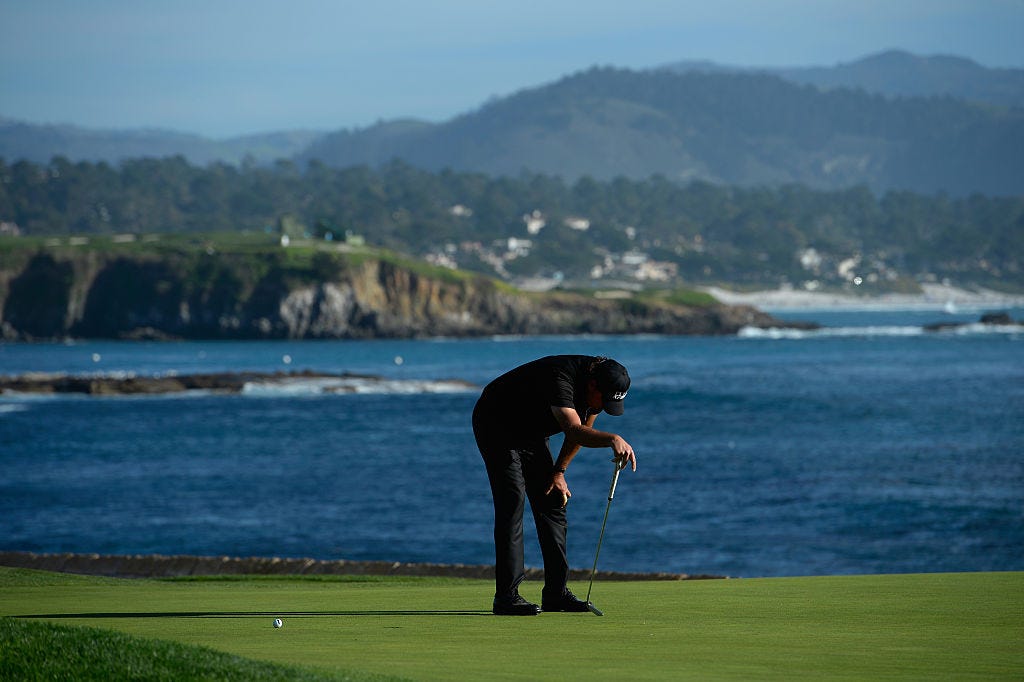 Vaughn Taylor is our defending champ. He won in dramatic (devastating) fashion last year after Phil missed a short birdie putt on 18.

But beyond that runner-up, Phil’s won this event four times. That ties Sam Snead for second-most all time, trailing only Mark O’Meara who’s won at Pebble five times.

Here’s a look at the betting favorites.

Guys typically win here with a score in the mid-to-high teens. I think that trend will continue, and my college hockey number was 18, so that’s as good a reason as any to nail down a winner here.

I like a lot, a lot, a lot of guys in the field this week. Sneds is coming off a disappointing T9 after being in control at Torrey Pines, but has finished inside the top-14 in 4 of his last 5 Tour starts. John Rahm is still reeling after his electric Farmers Insurance win, and backed that up with a strong T16 in Phoenix last week.

But I can’t get over one guy and one guy only and that’s Phil. Lefty. His three starts of the year so far are solid (T21, T14, T16) and his form looks great. He’s been in the hunt. He’s made A TON of birdies, just isn’t protecting those with enough pars.

Phil cleans up the mistakes this week. Guy loves Pebble. You can only go so long with this good of a logo and not end up with the hardware. 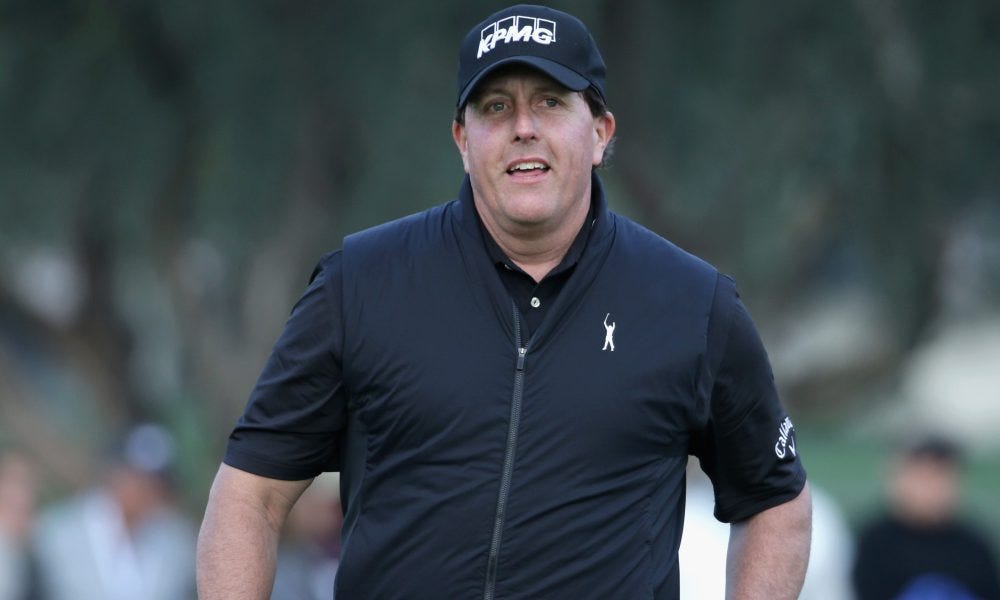 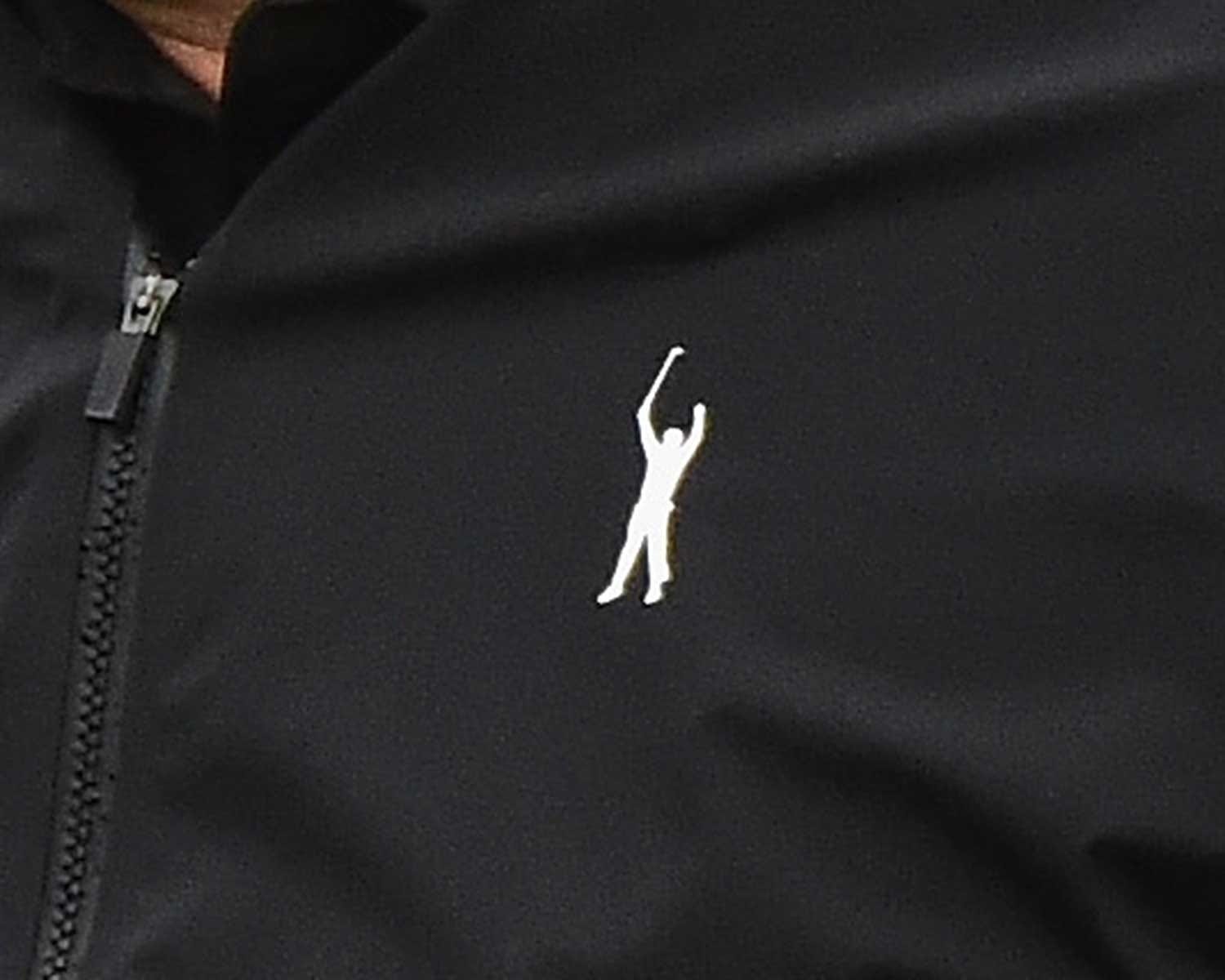 The “Steven Bowditch Memorial DFL” award has been suspended. We love Bowditch and are rooting for that dude, so the award has now reverted back to its original name of, simply, DFL.

DFL this week will be Steven Bowditch.

Just 57 days until the Masters. After a tough, emotionally crippling (for us not him) Tiger Woods withdraw last week, we’re hearing relatively good news this week. We’re hearing there’s no “panic.” We’re believing he will indeed be back next week at Riviera.

Let’s hope that’s true. The horizon is bright for golf as 2017 starts to build some momentum; only gets brighter with a healthy Tiger Woods.

Enjoy the views boys and girls. There’s no place like Pebble. 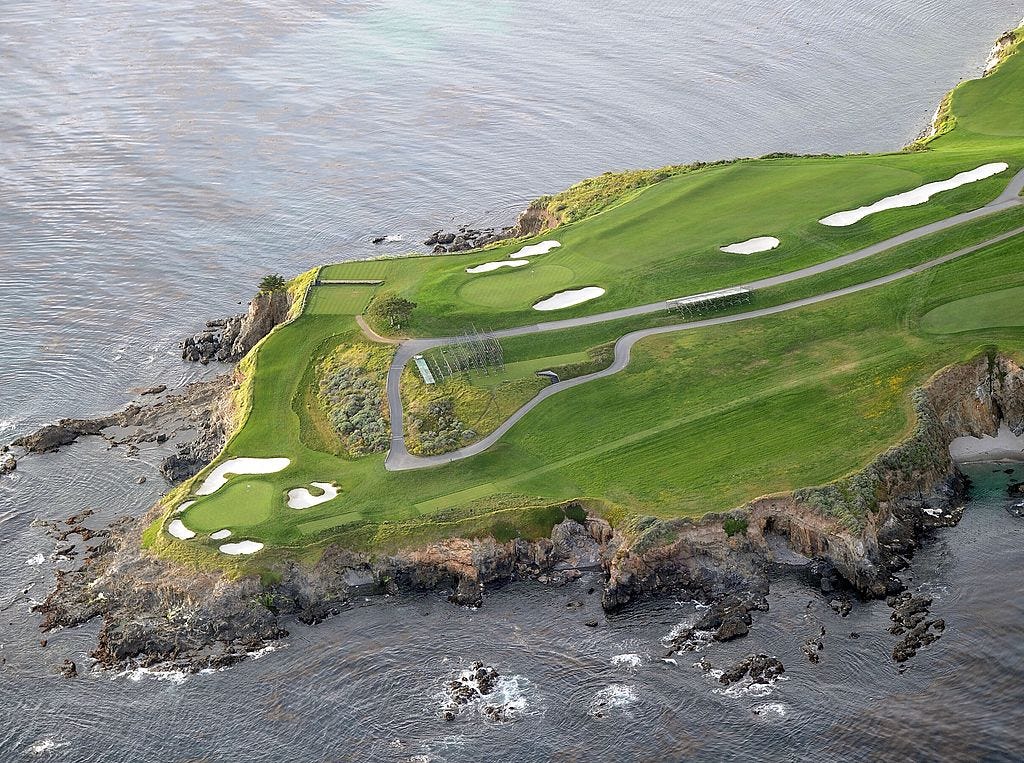