Not even going to pretend I get this move entirely. A guy who hit 41 home runs being available for $3mil isn’t something you normally turn down, but on a 1-year deal he’s going to take time from young players like Tyler Austin. Austin figured to get righty at-bats at both first and DH throughout the year, but with Carter on the roster Austin may be looking at time in AAA. This would slow the growth of a player that showed a lot of promise and has spent the last 3 weeks at the Spring Training complex, working on his glove.

There are a few theories as to why Cashman made this signing: 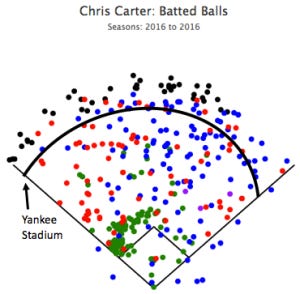 Honestly, it could be any of these situations, or Cashman may have just seen a good deal. Carter could turn into a valuable trade piece for a team looking to make a playoff run if the Yankees are out of it. Next thing you know, this questionable signing turns into a hot prospect from a team right on the brink making the playoff and we’re the fans acting like assholes at a parade.

However, I don’t see this as a situation where playing time is balanced between Carter, Holliday, Austin and Bird. These aren’t the old Yankees of the last few years that needed days off. These young guys need to play every day so we know what holes to plug with free agents soon.

PPS: When Kelly Johnson signs the same deal with the Braves in like a week, look for Carter jumping off a bridge.