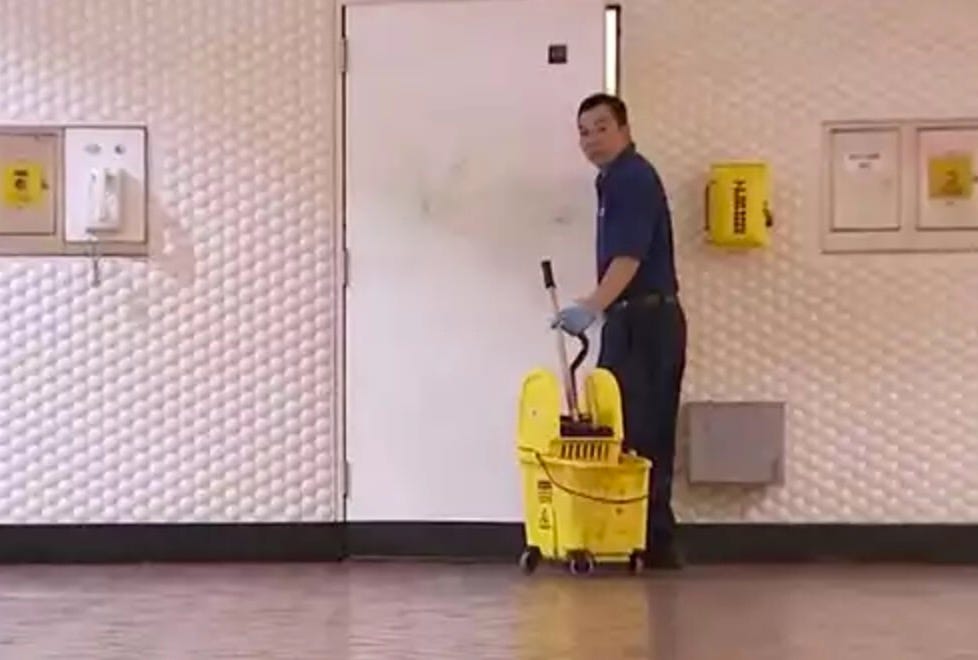 Daily Mail – A San Francisco transit janitor who earned more than $250,000 in one year, was caught hiding for several hours in a closet not working.

But public records released by Transparent California, show that Zhang also made an additional $162,050 in overtime, bringing his total salary and benefits that year to $271,243, according to an investigation by KTVU.

Zhang’s timecard data showed that he worked every day in 2015, and most days he worked overtime.

Over a two-day period, surveillance video from BART’s security cameras, showed Zhang working and completing his daily to-do list, but it also showed him disappearing inside a storage closet for hours at a time, according to the station.

On the first day, Zhang appeared to go into the closet twice, for 54 minutes and 90 minutes. And on the second day, he spent 90 minutes in the closet in the afternoon, and 78 minutes later that evening.

Talk about KFC’s snaking it til you make trope personified in a middle aged Asian man several thousand miles away. And overall despite the fact that he’s basically stealing from local citizens, I don’t hate his approach. And apparently neither do some of the BART supervisors who think that yes, in fact, it’s totally possible he worked nonstop for several years until almost becoming a millionaire:

[Chief transportation officer Roy] Aguilera says the population of homeless people who spend time in the Powell Street station means the janitorial staff spends much of their time cleaning up urine, feces, and needles, which he calls “totally unacceptable.”

“People are not raising their hands and saying, ‘I want some of that overtime.’ Mr. Zhang has said yes, he’s worked hard, he’s completed his assignments, so I stand by the work he’s done,” Aguilera said.

And that’s coming from a guy who’s working in the transportation system long enough that he’s risen to the rank of Chief, a great honor. But Aguilera is right, if this dude is willing to go around and clean up the urine, feces, and semen, why not let him take naps/play hide and seeks in closets for hours a day and years on end? They say he was getting all his important bodily fluid-based work done, something you just know every San Francisco public transportation area needs, and if the price to pay is a few extra hundreds of thousands to make sure it gets done, so be it. San Francisco’s spent money on dumber things.

Bottom line: You find a reliable person to clean up your disgusting fluids, you keep them around. That’s why kids bond with their moms at such an early age. Is Liang Zhang a bit disreputable? Maybe. But as long as the trains are running on time not drenched with the excrement of armies of organic-eating hobos, even tens of thousands in fraudulent overtime is a justifiable cost.