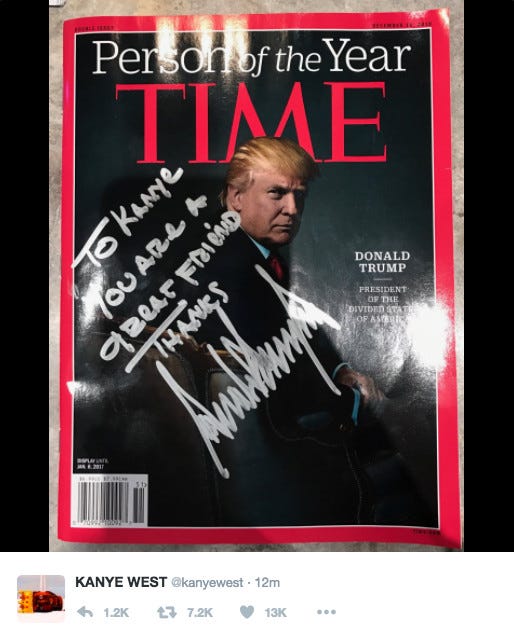 NYDN- Kanye West’s support for President Trump appears to have faded away. The hip-hop star — who made waves last year when he sat down with the President at Trump Tower — deleted every tweet he posted after their meeting because he’s displeased with the commander-in-chief’s actions since taking office, TMZ reported. West, 39, reportedly decided to cleanse his page of anything Trump-related since he’s unhappy with several of the billionaire’s moves thus far — including his controversial immigration ban. The apparent change of heart comes less than two months after the “Fade” rapper stopped by Manhattan’s glitzy Trump Tower to meet with the President for 15 minutes.

Neither Trump nor West disclosed the purpose of the meeting when they appeared in the building’s golden lobby afterward, but the rapper tweeted later in the day that he wanted to “discuss multicultural issues.” “These issues included bullying, supporting teachers, modernizing curriculums, and violence in Chicago,” he continued on Twitter. “I feel it is important to have a direct line of communication with our future President if we truly want change.” West concluded the Twitter missive with the hashtag #2024, apparently announcing his decision to push back his much-promised run for president by four years. All of those tweets from West are now gone, as is one displaying a signed copy of President Trump’s latest Time magazine cover.

Listen, we can say Kanye deleted those tweets for a lot of reason. He is married to a very powerful (financially speaking) woman that may not be Trump’s biggest fan. Maybe all his friends got in his ear and convinced him that Trump wasn’t the leader for him. Or perhaps Kanye saw the rest of the world was bitching and moaning about Trump and wanted to join in since that’s his #brand. I don’t know. But the one thing I actually respected about Kanye was how he acted like he didn’t give a shit what other people thought about him, even though he clearly did. You liked his music that sounded good from early in his career? Too bad, this new shit is art. He’s the genius, not you. Which is why I am so surprised he actually admitted a mistake and deleted his tweets. Nothing is weaker than deleting old tweets. They are like a tattoo. Some may be good, some may be bad, but they all stay with you unless you have no gumption and remove them. If you don’t stand for something, you will fall for anything. The only person better at digging his heels into the sand than Kanye is The Donald, which actually made them the perfect tag team.

However, the good news in all this is that we are clearly going to have a Trump vs. Kanye feud now. The Mega Powers explode times a billion. You slight Trump in any way, you made the list. You slight Trump on Twitter [dot] com, his personal war room? Hope you have your own set of nuclear codes, Yeezy. Now we just wait for the first anti-Trump tweet from Kanye, followed by a 6:30 am reply tweet from our President saying that other than My Beautiful Dark Twisted Fantasy, Kanye’s career arc has gone the same direction as M. Night Shyamalan. Sad!

It was all good just a few months ago…