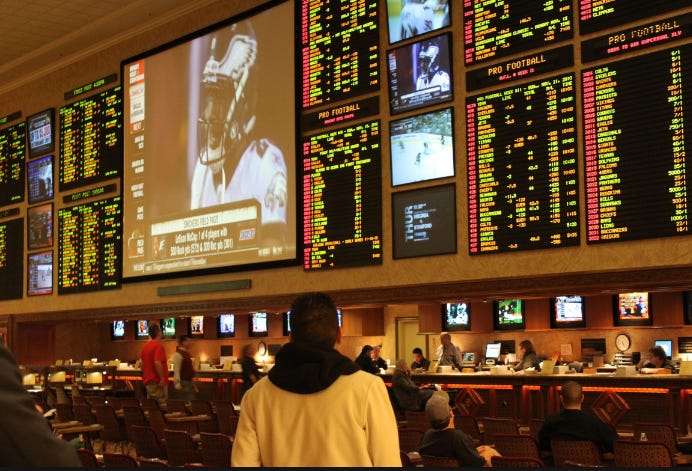 Royal Oak resident Dominic Mirabella, 39, is $1 million richer after his winning bet on the New England Patriots in Super Bowl LI, he confirmed to The News Monday morning.

But Mirabella’s story, previously reported by Channel 7/WXYZ, wasn’t a result of betting one game properly, but dozens of games, from the first week of the NFL regular season through the Super Bowl. Mirabella won the money using an app called REDACTED. This required successful bets against “the spread” in four games a week, all 17 weeks of the regular season, as well as games throughout the playoffs, 81 in all.

REDACTED, co-creator of the REDACTED app along with partner CJ Karchon, told The News Monday that Mirabella had to be lucky as well as good to win. In week three, Mirabella made his move too late. He had to buy in using a “late picker power up” to participate. Late picks are made randomly by the app. Mirabella still went 4 for 4 on those random picks.

Nope. I mean there is a zero percent chance you can go 81-0 against the spread picking games in the NFL. None. I can’t even hit a four team parlay in the NFL without getting burned on the last leg by some bullshit play. 81-0? Get the fuck outta here. From my understanding he picked four games every single week through this app REDACTED. I guess you had to go perfect for the year to get the million? I’m going to guess the odds of you going 81-0 ATS in the NFL is greater than getting a perfect march madness bracket. Uhhh, where was the coverage on this story? We had two weeks of absolute bullshit headlines (besides Barstool Sports dominating the world and the moon) that a guy being 80-0 going into the Super Bowl should’ve popped up somewhere. I hadn’t seen this story ANYWHERE. Until conveniently this morning when he successfully picked the Pats -3 to win the million bucks. No fucking shot.

What Actually Happened: REDACTED, in an effort to get their name out there and for people to visit the site, gave this guy a solid amount of money (not a $1 million), to come out and say he went 81-0 using the app. There were no articles about this site anywhere until today. If this really was happening he would’ve had some solid press coverage no questions asked. The odds of picking a perfect March Madness bracket are 1 in 128 billion and that’s never happened. I’d love to see some math guy come out and say what the odds of going 81-0 ATS are in the NFL. It has to be outrageous. So now people are talking about REDACTED and signing up for the site because they got duped into believing this fairy tale. Well done REDACTED but I don’t believe this story for one second and I will not be JMac’d. Which is why I’ve REDACTED your name in your cute little viral story right in your app face. And if you think “well people can just Google it” you seriously underestimate the laziness of our readers and writers.

P.S. If this by some chance is real I hope this guy threw at least $400k and hedged with Atlanta. Pussy move or not, if you have a free $1 million riding on New England in an even match up you’re a fucking idiot if you don’t hedge. Still calling bullshit.