Putting Johnny Cash over any trailer should be mandatory at this point. That man could make paint drying or even a preview for Nate At Night seem incredibly interesting.

Dammit, Disney. Damn you for making this average-at-best movie look incredibly entertaining. This trillion dollar juggernaut of a company will oversaturate anything. You give Disney a Triple Crown worthy horse and they’ll not only kill it but beat the dead body until it shits out the last nickel. And I don’t blame them one bit. Why wouldn’t they piss out a watered down Star Wars movie every year now until time stops? Rogue One was essentially geek fan fiction and crushed. Hell, it could’ve solely consisted of C-3PO goosing Chewbacca for 3.5 hours and it would’ve still grossed a billion dollars. Same goes for Pirates Of The Caribbean franchise. As long as Johnny Depp wants to get millions to play his butt-pirate Keith Richards then we’re going to get an OK film that will never be great. And that’s a damn shame because the original Pirates Of The Caribbean was a fantastic flick full of unlimited potential. The only way this ship can be saved is if Disney grew some balls for once in its existence and give this the Deadpool/Logan treatment. An R-Rated Pirates with a drunk Geoffrey Rush and drunker Johnny Depp slaying everything in sight would be an incredibly entertaining scene. But, nope. Disney gonna Disney, and I don’t blame them one bit.

Wait, I forgot they already made an R, nay, X-rated version of this franchise. 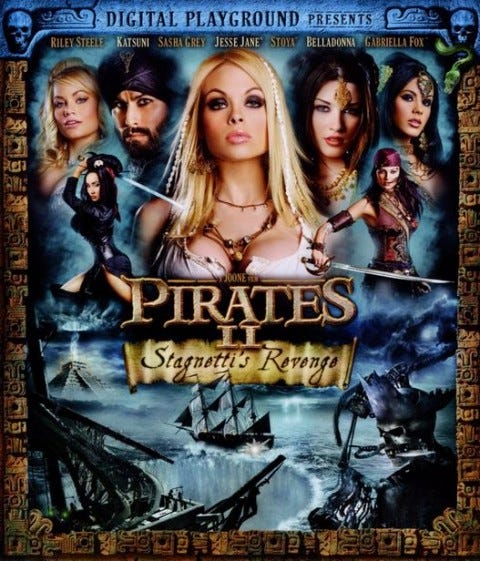