Well well well what a year, and what a Superbowl. The game had a little bit of everything from spectacular catches, to comebacks, to a Falcon’s RB scoring all by himself in a touching tribute to Jamal Anderson. But the question on everyones mind is- Where was Cam Newton? The NFL should force Newton to give a press confrence after every Superbowl until he actually shows up for one and get’s it right. You know, even Beethoven could face the music after a tough loss, but even though his hearing was gone his sense of decencey remained intact. The only hearing Newton ever lost was at his pre-trial arraignment folks. As I watched last nights post-game ceremony I simply couldnt believe the lack of class from Newton last year who didnt let me see him be sad after he lost so that I could be happy.

Cam Newton I guess had the time to collect his check for his Superbowl commercial (which showed him committing numerous personal fouls without repercussion) but I suppose not enough time to make up for last year and actualy face his critics like a man. I cant be the only one who thought that maybe Cam Newton selling out for Buick was a tad inapporprate. Cam advertising for cars is simlar to Jay Cutler advertising for pixie sticks, or Aaron Rodgers schilling for ancestry.com.

And you cant tell me it was a coincdence that Mr. Newton just “happened” to give birth to his second child on Friday as if there werent enough kids out there running around without the clutch gene. You could tell it was allmost like he was timing it so that Newton could skip the game if he was playing in it. Nothing like a child to shield yourself from scrutny. You know who would never do that is Coach Belichick who simply just hires them all in order for them to be more accountable to the media.

Plus it was kind of ironic given his test-taking reputation at Florida that Newton would of spurned copycats instead of being one himself. Well consider it a job well done because Patriots TE Martellus Bennet has preemptiveley decided that he dosen’t need to show his face in front of the new media- Donald Trump &his twitter account- during the traditional White House visit.

Before Cam Newton no one ever talked about politics by not showing up to talk about football, and nowdays your not cool unless your trying to fix a problem or raise awareness. Well guess what Cam, two can play at that game and by refusing to drink budwiser in lieu of Natty Light, I am basicaly the new Rosa Parks. And then there was that Audi commercial so I’ve gone ahead and delayed my plans to buy a brand new Audi too I guess. I dont know what that movie Selma was all about,but boycotting is exremeley easy if you pick the right brands.

My boycotts are on a sliding scale depending on how often I use that product to begin with. For example if Durex came out with a ad shoving there pro-choice rhetoric down my throat- well number 1 that would be bad marketing from a demo-cannibilizaton standpoint- but number 2 I would jump on that train before they even opened the door because im not exactly purchasing my condoms at Costco these days. Now on the other hand it would basicaly take the CEO of Buffalo Wild Wings launching a tactical nucular missile at my own dick for me to even consider not hosting the majority my fantasy drafts there next year. You got to be smart. Unlike Cam Newton 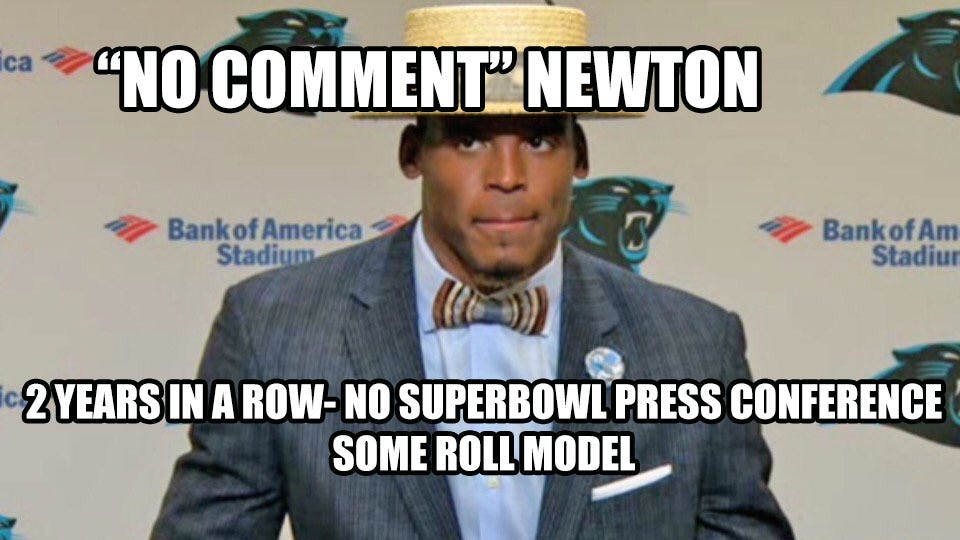 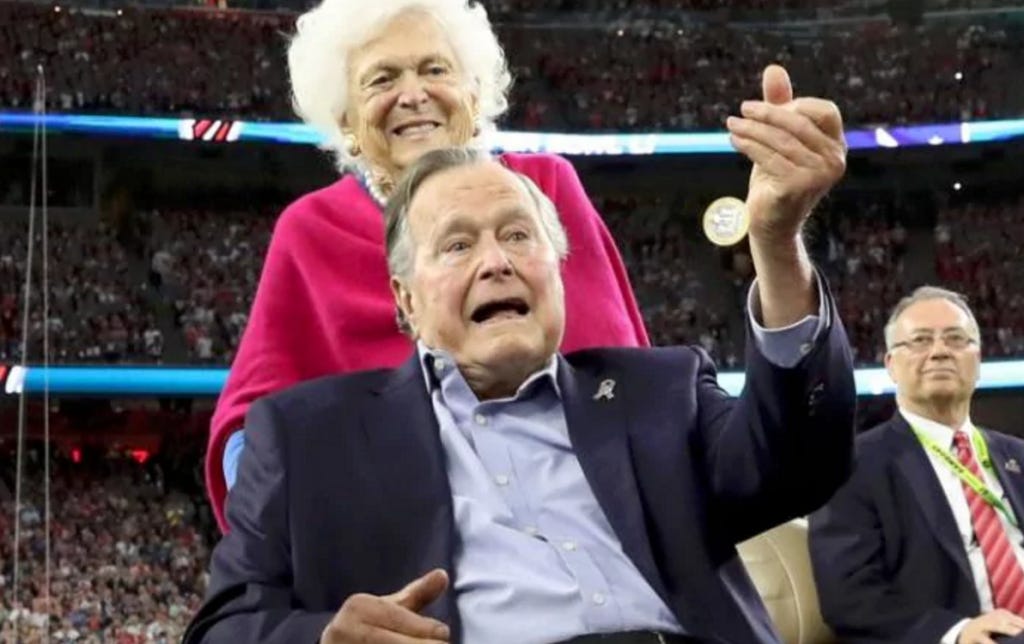 Aside from his gal Barbara lookin thicc as hell, George Bush cruised out on to that field with padlevel lower then you could ever believe and delivered the most coherent economic policy of his career. Folks speaking of letting a quarter slip through your finger’s how about that Falcons playcalling?

It was nice seeing the repsect that Brady showed to President 41, but you know who else threw a bunch of parades and drove amphibous vehicles through the city streets under the guise of Patriotism? I’m not going to name names but this fella also had a bunch of coin thrown at him by the Bush family at the start of a conflict.

1. We didnt start the fire:

2. Late addition to Football Guy Of The Week comes to us from Lake Zurich High Schools former Assistant Coach Chad Beaver, who was born to play the roll of disgraced coordinator. It seems that Lake Zurich had a bunch of PC police for parents who filed complaints because there team had a short time of 20 years where:

Football team bonding rituals over the past 20 years have included players urinating on teammates or placing their genitals on their faces without consent, according to the 67-page complaint seeking monetary and other damages. The suit also claims the Lake Zurich High football team has had players force teammates to perform oral sex in past years.

Little locker room talk. Nothing to see here right? Wrong. Turn’s out guys cant be dudes in Americas lockerooms anymore these days. But fortunateley we have guys like Chad Beaver whose here to talk some sense into these trolling parent’s when they called to complain about there kid getting a little piss up his nose:

Beaver, who couldn’t be located for comment Wednesday, responded that 14 teammates witnessed what occurred, that it “happens all the time” and “even I got peed on in high school,” according to the lawsuit.

3. That fish in the amazon that swims in youre urethra when you pee

3. Big night for Elevens, as Stranger Things announced it was coming back and Julian Edelman made whats now being widley referred to as the immaculate gritception. The leagues premere Jewish player decided he was going to have to set the kosher aside and do whatever it took to get his hand’s all over that pigskin. Saturdays are for the Goys, but Sundays are for the Edelmen. 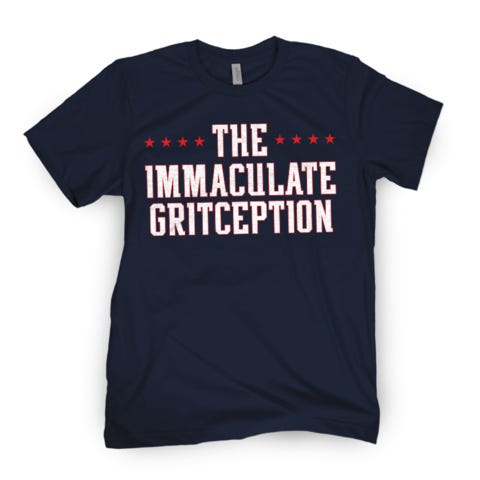 4. Thought it was a bit racist of the officals to flag Shea McClellan for his jump over the center on Matt Bryants PAT attempt. Just because hes a white guy and his leaping look’s a bit awkward dosen’t mean your allowed to throw a flag on it.

5. Mr Clean cucked America. He showed up in our homes in the 3rd quater looking like Pete Carrols platonic ideal of a defenseive coordinator and next thing you know that skinhead bastard has every USA housewife needing a man to follow them around with a mop just to clean up the excess lubrication.

6. Welcome back Spuds McKenzie. Something awsome about being a dog that can drink all the beer you want and not piss yourself. Cant piss yourself if you never wear pants- kind of a lifehack.

7. Were the Atlanta Falcon’s good? I dont think we’ll ever know. They werent good the year before and even though they were better in 2016,they still played some games this year where they looked like a trash can filled with dead birds. Plus there defense wasn’t that good but sometimes it was kind of good. Also there were a couple of times that Julio Jones made plays that troubled me from a psychological standpoint in terms of what realty even was, but then sometimes he disappeared and also missed games w a toe injury. Matt Ryan won the mvp but was he Elite? Im not so sure that he wasnt un-elite but I certainly am looking forward to debating it for the next 7 years.

Also Kyle Shanahan threw that game because he dosen’t want to work in a state where the income tax is so high.

8. Tom Brady has been a tax burden on the city of Boston for the past 11 years.

Do you know how much money Tom Brady has bilked the city of Boston for over the past 10 years through his victory parade’s? Its been million’s and million’s of dollars. Dollars out of the local economy that could of been spent on buying eggs to throw at college students.

Im done with victory parades. If I wanted to see a bunch of football players get drunk and ride around a city with cop car’s everywhere Id just spend the weekend in Cincinatti. The orignal parade was when Jesus carried his cross through Rome and is not something to replicate just because you were the only team whose season didnt in in disappointment.

9. Two guys from Atlanta that probably should of run and will both be forever assocated with lost backpacks- Kyle Shanahan & Richard Jewel. Jewel, whose name literaly translates to “cock ring” set the blueprint for how to get away with this type of thing, and  of Belichick to get a sneak peak of Kyle’s “stop running the ball when a FG wins the game” 4th quarter strategy. Even Jewel knew he should of run.

69 of the week: Kings Stay Kings