Full Disclaimer: I know that as the hockey guy around here, I’m pretty much useless the day after the Pats win the Super Bowl. I could probably just write headlines with no actual blogs behind them and nobody would notice. So I figured out we’d start things a little differently this week since this McQuaid vs Martin tilt should help everybody get through this week of having to deal with all the shit Patriots fans will be throwing our way. Both dudes just throwing heavy right-handed bombs. Chuckin’ knucks till somebody dies. That’s some old time hockey right there, boys and girls. Gets the blood flowing, gets the energy in the building up. Those dorks who strictly watch hockey with a calculator and spreadsheet wouldn’t understand that. But what a tilt between those two. And if that wasn’t enough to get your week started, here’s Nikita Zadorov using Mark Scheifele as his personal crash test dummy.

I believe it was the late great philosopher Andy Grammer who once said, “but you gotta keep your head up, ohhhhhh. And you can let your hair down, ehhhhh”. And again, that’s just old time hockey. Eddie Shore. Doesn’t take a charge at him or anything. Scheifele is leaving the zone like a bat out of hell, Zadorov makes a play on the body and he doesn’t even see it coming until he’s doing a backflip through the air. Good god.

And now let’s get to the goals. Starting with Sid being way too casual with this one.

Backhand, one-timer, down on one knee. Just watch how he adjusts his body for this one. He’s set up the whole way for his forehand. Kunitz throws the puck a little ahead of him and he tracks it down like it’s no big deal. I don’t know how many other players in the world are able to do what he just did right there and he makes it look so easy. To completely flip your body AND get your stick on the puck AND have it end up in the back of the net. That son of a bitch.

Thoughts And Prayers Go Out To This Water Bottle

I don’t know if they have GIFs in the Museum of Modern Art yet. But that goal right there belongs in a museum. Over the shoulder, under the crossbar, murder the water bottle. #HollaIfYaHydrate. Unreal snipe from Oshie here. Shortside, too. Poor Peter Budaj. Guy didn’t even have a chance on this one and now he’s gonna be thirsty as heck for the rest of the game.

Will Ny The Scoring Guy

William Nylander potted home his first career hat trick on Friday. He must have used some baby powder on the first goal of the night because it was extra smooth.

And then I’m pretty sure he had enough time to order dinner on his 3rd goal of the night. 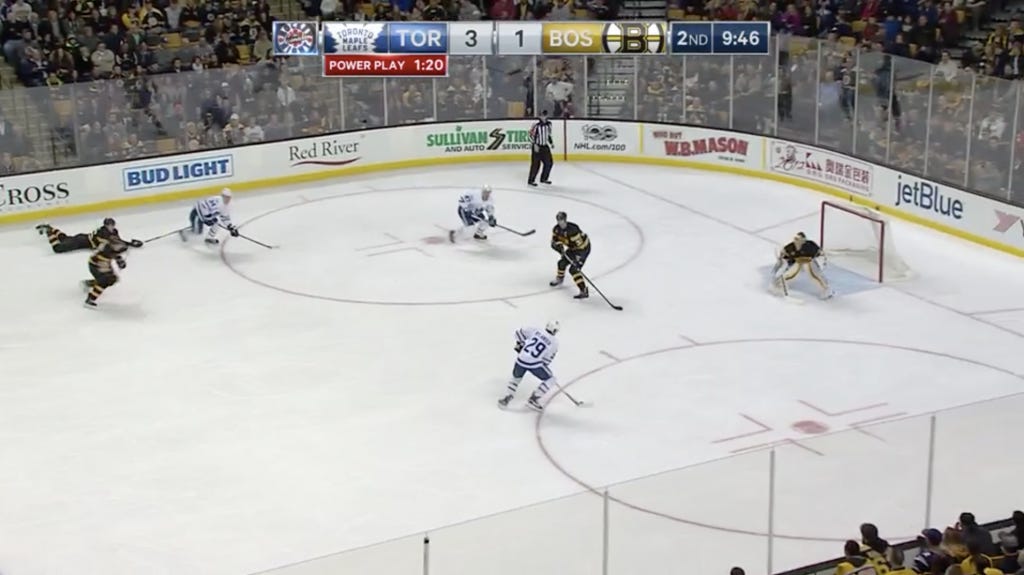 Seems a bit problematic to me.

Did Lionel Messi Suit Up For The Sabres And Throw On Brian Gionta’s Jersey? Well,,, It Hard To Say

Lax Goal Of The Week

Not exactly fair when the Thompson brothers can shoot behind-the-back better than most guys can shoot regular. And speaking of lacrosse, did you know that Super Bowl Champion Chris Hogan actually used to play? Just a little fun fact for all you kids at home.

Until next time. Stay saucy, my friends.