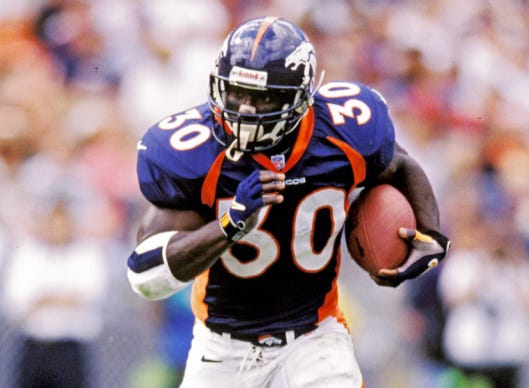 First things first, this is a pretty good NFL Hall of Fame class, congrats to all the guys who got in. LT was a surefire 1st ballot guy, I was surprised Jason Taylor got in, but taking a second look at his stats, he was a freak. Morten Anderson, all time leading scorer in NFL history, that makes sense, even if he is a kicker. Kurt Warner had a great storybook career, I think he was deserving of making it in finally.

There is one name that I don’t think belongs with those others. The fact that Terrell Davis, the 55th all time leading rusher was inducted into the Hall of Fame before the second leading receiver ever, Terrell Owens, is absolutely mind bottling.

Terrell Davis played seven seasons in the NFL,  and from his rookie year in 1995 to 1998, he was one of the best running backs in the league, putting up 1,117, 1,538, 1,750, and 2,008 yards. Those same seasons he also put up rushing touchdowns of 7,13,15, and 21. Very good numbers. He added 2 Super Bowl titles, and a Super Bowl MVP during that stretch from 95-98, not a bad four seasons. But that is all he really had, four seasons. He played three more years, and rushed for a combined 1,194 in those three seasons. Davis really performed well when the lights shined bright in the playoffs, rushing for 1,140 yards and seven touchdowns in his 8 playoff games, including his performance in the Super Bowl against the Packers where he rushed 30 times for 157 yards and three TDs. He for sure had a window where he was probably a top 3 back in the NFL. But after those years he was nothing due to injury, he retired with 7,607 yards, less yards than Garrison Hearst, DeAngelo Williams, Tiki Barber, Eddie George, Willis McGahee, and Stephen Davis.

What makes Terrell Davis a Hall of Famer over a guy like Priest Holmes? Both had only a handful of seasons where they were elite, and the rest of their times, they were injured and didn’t produce. Looking at the numbers, you can argue that Priest Holmes best 4 years were better than Terrell Davis’ best four years, and Priest probably won’t sniff the hall. If the only real reason that Davis made the Hall of Fame was because of the Super Bowls, that is a joke. He was playing with arguably a top 3 QB of all time, he wasn’t facing 8 guys in the box with like Priest was at times. It is hard to take away the post season success he had, but that should not be the major factor in this decision.

The fact is that Davis played SEVEN seasons, and only 78 games. That’s a little over four and half seasons worth. And Davis only had had four good years out of his seven. Arian Foster played eight seasons, and had four good seasons too, does he make it in? I know that Davis is one of two guys ever to average more than 100 yards rushing per game in the regular season and postseason combined, the other being Jim Brown. I don’t think he played long enough to justify making it in, four good seasons and 8 good playoff games is all it takes I guess. Frank Gore is going to double Davis in yards, and beat his TDs by 20 and it’s hard to say if he’ll get in. Bottom line, should TD be in the Hall? Maybe, probably, but given the choice, I’d take Priest, Edge, Ricky Williams, Clinton Portis, and Shaun Alexander over him, but I’m not dying on this “TD shouldn’t be in” hill, my bigger grudge with the voters is that TD made it in over Terrell Owens.

TO should have been first ballot for dancing right in Ray Ray’s face.

Talk all you want about his relationship with the media. But didn’t he give them EVERYTHING they wanted? You knew you could count on TO to stir up some controversy with a celebration involving a sharpie or pom pom, and yeah, maybe he will get kicked out of training camp and host a workout in his driveway, or maybe he will be so upset about a loss and people criticizing his quarterback that he literally sheds tears in a press conference. Isn’t that the stuff that media members would die for? Now you just have JJ Watt reading the same damn script after every game, or you have Cam Newton stiffing the media. TO gave these guys storylines for DAYS, talked the talk and walked the walk. And will have to wait to be on the ballot for a third year to be inducted, even with video game numbers. Just insane. Owens should have been a first ballot guy, plain and simple. “BUT HE WASN’T A GOOD TEAMMATE!” Yeah, I can’t believe he was an asshole to his team and played in a Super Bowl on a broken ankle and then caught 9 passes for 122 yards.

People think that the MLB voters are pompous? NFL voters may be worse. The whole “1 of a position at a time” (except this season with RBs) thing is a joke. IDC who else is in your class, if you are a hall of famer, you are a hall of famer. These voters who won’t vote for a guy because he didn’t talk to them after a game or something like that, get a grip. The fact one of the most dominating receivers ever won’t make it into Canton until MAYBE his third year of eligibility because of personal reasons from writers is a joke, no other way around it. 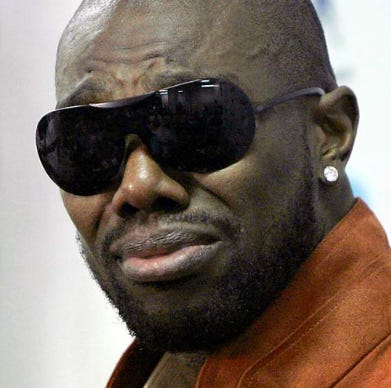