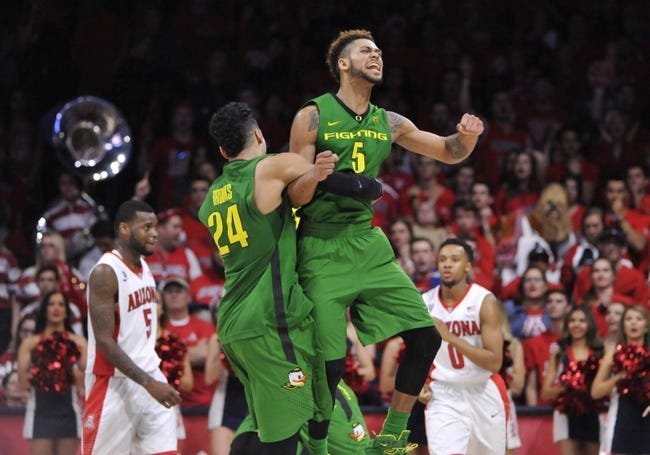 We’re coming up on a month left in the regular season and instead of teams pulling away for conference title leads and potential No. 1 seeds we’re starting to get more clutter at the top. That’s a good thing. That means there’s always a meaningful game on and not just one of ‘this team needs to win to stay off the bubble.’

– Note, the Notre Dame/UNC game has been postponed until tomorrow due to an emergency water crisis in Chapel Hill. There was a major water main break that caused the area to become unsafe, the game is now being played in Greensboro.

-The game of the day is obvious – it’s Arizona at Oregon. Arizona is 10-0 in the Pac-12 and a game up on Oregon after both teams didn’t look particularly great in their last games against Oregon State and Arizona State. Arizona State’s guards gave Oregon a ton of trouble, which is highly concerning if you’re a Ducks fan. Arizona is loaded at the guard position with the return of Trier. Sean Miller needs to start balancing minutes between Trier, Jackson-Cartwright, Alkins, Allen and Simmons.

– Dillon Brooks when healthy is one of the biggest mismatches in the country. Oregon can run him at the four spot, making teams adjust how they play defense. On top of that Oregon has two extremely athletic bigs in Boucher and Bell, allowing Oregon to look completely different. Right now Brooks is healthy and looked it against Arizona State – essentially winning that game on his own. Arizona is one of the best defensive teams in the country but can Markkanen stick with Brooks? Does Arizona go smaller and put Allen on Brooks? This is absolutely something to watch.

– This game will determine a couple things. Arizona needs this game in the race for the No. 1 seed. If they win this game, they should (I stress should) finish the Pac-12 regular season with 1 loss and have wins at UCLA and Oregon. On top of that a win by Arizona here all but locks up the Pac-12 title. I like Arizona’s depth too much here and I’m going against my normal routine of home teams. Arizona and the points please.

– The biggest (and arguably most annoying) storyline today? The fact Coach K is returning to the sideline. I’m going to need Grayson Allen to do something stupid just to get the hot takes about him and K at the same time. Regardless, Duke should win this game with ease.

– Pay attention to Purdue heading to Maryland today at noon. Both teams are desperate for this win for a couple reasons. Maryland can solidify itself by getting a win against a team that’s a lock for the NCAA Tournament and the B1G race comes down to Maryland and Wisconsin. Purdue has been very inconsistent – something that is said every year about them. However, they need this to stay hovering around a top-4 seed.

– Maryland can throw a couple different looks at Caleb Swanigan today. They have 3 centers who all do something a little different. On top of that they could always put Jackson on him and let one of the centers play Haas. The Terps do grade out as excellent defensively this year and the key will be to keep Swanigan off the offensive glass while Cowan and Trimble disrupt Purdue’s guards.

– I know he’s not ‘officially’ going for his 1,000 win, but let’s be honest. Jim Boeheim is going for win number 1,000. Cuse likely needs to go 5-3 down the stretch and go 2-2 against Virginia, Louisville (twice) and Duke down the stretch to make the NCAA Tournament. Here’s their first chance getting Virginia at home.

– Kentucky finds itself in a weird situation. They were supposed to run through the SEC yet they’ve struggled losing at Tennessee and recently needing OT to beat Georgia (granted there was no Fox or Mulder). That’s the key though. Can De’Aaron Fox play after dealing with a stomach illness this week?

– Florida will absolutely get after you on the defensive side of the ball, making you work for every shot. Expect them to try and slow Kentucky down to playing a halfcourt game with a heavy focus on taking Malik Monk out of the game.

– If Fox plays, Kentucky +2 is the play here. Fox completely changes how Kentucky plays offensively and if Calipari isn’t stubborn and plays that 2-3 zone more you add even more length to it. Personally, I’d like to see Kentucky junk up its defense a little bit more. Run more zone. Press and trap, let Monk and Fox jump passing lanes while Briscoe plays a safety. This will keep Monk locked in defensively and help just change the pace. Play to your strengths.

– Illinois State can wrap up a MVC regular season title with a win at Wichita State today.

– In a game where teams are dealing with injuries – Xavier at Creighton today where both point guards have recently torn their ACLs. I love Creighton in this spot as they still have guys like Foster, Patton and Thomas. Xavier will need a big game out of Blueitt, take Creighton -5.5.