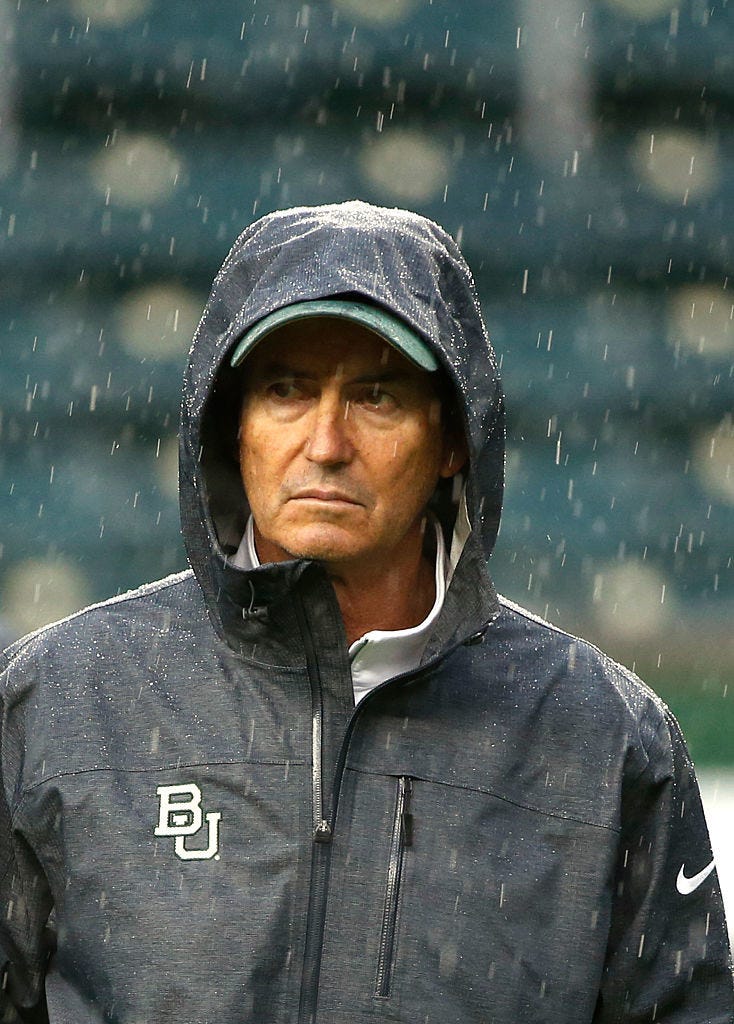 TMZ – Newly uncovered text messages allegedly sent by ex-Baylor coach Art Briles show how poorly he handled situations where his football players were involved with drugs, guns and even an incident where a player exposed himself to a woman at a spa.

The texts are part of a lawsuit involving ex-Baylor assistant A.D. Colin Shillinglaw — he sued the school and several regents for defamation claiming they wrongly lumped him in as one of the main bad guys in the infamous Baylor football scandal.

Several regents responded in court docs — essentially saying Shillinglaw’s suit is just a “smokescreen” to hide the truth about the program under Briles … and they included several damning text messages to prove their point.

Just when you thought Baylor had given up in their quest for the Death Penalty…here comes Art Briles to save the day.

– On April 8, 2011, after a freshman defensive tackle was cited for illegal consumption of alcohol, Coach Briles sent a text message to an assistant coach: “Hopefully he’s under radar enough they won’t recognize name – did he get ticket from Baylor police or Waco? … Just trying to keep him away from our judicial affairs folks….”

— On February 11, 2013, an assistant coach notified Coach Briles of a claim by a female student-athlete that a football player brandished a gun at her. Coach Briles responded: “what a fool – she reporting to authorities.” The assistant coach texted back: “She’s acting traumatized … Trying to talk her calm now… Doesn’t seem to want to report though.” Coach Briles texted: “U gonna talk to [the player].” The assistant coach concluded: “Yes sir, just did. Caught him on the way to class… Squeezed him pretty good.” The matter was never reported to Judicial Affairs.

— On September 13, 2013, Shillinglaw sent a text to Coach Briles about a player who got a massage and “supposedly exposed himself and asked for favors. She [masseuse] has a lawyer but wants us to handle with discipline and counseling.” Coach Briles’ first response was “What kind of discipline… She a stripper?” When Shillinglaw said the player made the request at a salon and spa while getting a massage, Coach Briles wrote, “Not quite as bad.”

— On September 20, 2013, after a player was arrested for assault and threatening to kill a non-athlete, a football operations staff official tried to talk the victim out of pressing criminal charges. Meanwhile, Coach Briles texted Athletics Director Ian McCaw: “Just talked to [the player] – he said Waco PD was there – said they were going to keep it quiet – Wasn’t a set up deal… I’ll get shill (Shillinglaw) to ck on Sibley (local attorney Jonathan Sibley).” Athletics Director Ian McCaw replied: “That would be great if they kept it quiet!”

— In October 2013, Shillinglaw and Briles discussed their efforts to intervene on behalf of a player who was suspended for repeated drug violations. “Bottom line, he has to meet with (Vice President for Student Life Kevin) Jackson tomorrow morning. If Jackson does not reinstate President will,” Shillinglaw wrote.

— On May 14, 2014, after Coach Briles learned from an assistant coach that a player had been caught selling drugs, he texted: “I’m hoping it will take care of itself – if not we can discuss best way to move on it.” The offense was never reported to Judicial Affairs and Coach Briles arranged for the player to transfer to another school. The assistant coach texted: “Him just hanging around Waco scares me. [Another school] will take him. Knows baggage.”

— On August 15, 2015, after a player was arrested for possession of marijuana, Coach Briles texted an assistant coach: “Sh*t – how about that – he’s gonna b (sic) in the system now – let me know what you think we should do… I can get shill (Shillinglaw) to call Sibley or we can…. Do we know who complained?” The assistant coach responded that the complainant was the superintendent at the player’s apartment complex. Coach Briles replied: “We need to know who supervisor is and get him to alert us first.”

The entire time I was reading these alleged texts I was cringing waiting for the sexual assault cover up. Some sort of smoking gun of Briles of blatantly dismissing a rape. Thankfully it never came because that would be way too much outrage to handle for a Friday. Guns and drugs and alcohol – you see those every day. But seeing cold hard proof of Briles trying to sweep rape under the rug and find out “who to talk to” to make it go away?” would be the epitome of disgusting.

I mean don’t get me wrong, the NCAA certainly is still going to hammer them. They’re not as lenient on breaking the rules. Just a bad look all around when your first response to every player who breaks the law is “who can we talk to to hide this.”

A worse look? Being accused of covering up 52 rapes by 21 different players over the course of 3 years. Find the texts confirming that.