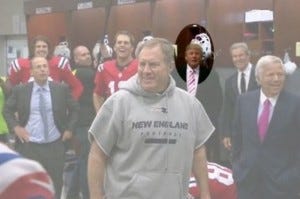 In the midst of a contentious presidential election, the three figures most commonly credited with the Patriots’ success — Brady, head coach Bill Belichick, and owner Robert Kraft — all expressed support for their friend Donald Trump, despite many divisive and polarizing statements made by the then candidate.

Now … he is among a contingent of fans who admit to feeling somewhat … conflicted. “With sports, there definitely are a lot of things that you overlook in order to just enjoy the entertainment of it,” said Daly, a 26-year-old South Shore native. “I was a Pats fan my whole life. I want to watch and love them and root for them. I just feel like I can’t.” …

“I find it very hard to support the Patriots now,” said Haji Shearer, a 54-year-old small business owner who grew up in Dorchester rooting for the team but is disillusioned by Brady’s friendship with Trump. …

Bridgewater resident Kelly McMorrow, who works for a musical instrument manufacturer, has spurned the Patriots in favor of the Bruins in the wake of the election. Meanwhile, Hudson native Marty Moran said in an e-mail that while he’s never before had a problem with athletes’ political endorsements, “that’s because an athlete endorsement (tacit or otherwise) was never before tied to a man who wants to burn civil liberties to the ground, bury science, ban Muslims, and brags about sexual assault.”

“In order to watch and not feel disgruntled or disillusioned, I really need to keep them separate in my head,” said Frattini, who calls Belichick’s letter of support to Trump a “stab to the heart.”

This is the second article to come out in the last couple of weeks about alleged Patriots fans supposedly ditching the team over Brady, Belichick and Mr. Kraft being friendly with Trump. So as the team these people claim to care about is one game away from making history, cementing the Holy Trinity of New England football as the best quarterback, coach and owner of all time, their relationship with the freely elected Commander in Chief has left them feeling hollow and empty inside.

First of all, it’s wretchedly shitty journalism to interview a few random nobodies and report it like they represent some sort of major societal shift. Just because a Globe writer talks to some upset Never Trumper at Spin Class or a wine glass painting party doesn’t make it news. I don’t know jack squat about reporting, but don’t you have to prove a point? With polling numbers, data, something? Anything besides the sad introspection of some small business owner you met in line at Starbucks?

Second, where do writers dig up these people? I’ve lived inside of Rte. 495 my entire life and I swear I’ve never met anyone like these triggered snowflakes. I’m surrounded on all sides by neighbors who hate Trump. Saying he’s not a popular man in these parts is the understatement of the decade. But I could reach out to literally everyone I know, either in person, Twitter or Facebook, and not find one who would let The Donald’s friendship with the Patriots get in the way of their lust for a fifth LomBrady Trophy (copyright, Jerry Thornton, all rights reserved). Not one.

I do know people who don’t care about the Patriots. True story: The Irish Rose has a musical theater friend I like a lot. She once puked pomegranate martini into my kitchen sink at a Christmas party and I didn’t even mind because she’s so great to us. And a huge Patriots fan. Well one time I was talking to her husband and without batting an eye he said to me “Wait. Who is Bill Belchick?” No joke. I lost the ability to talk for a good 30 seconds, like when Veronica Corningstone told Ron Burgundy his hair looks ridiculous. And I knew in that moment I could be nice to the man, but never be his friend. But claiming you were a Pats fan but no longer are because of politics is infinity times more unforgivable.

And if I did happen to meet someone who said they used to like the Pats but now they’re too disillusioned or compartmentalizing or whatever, first I’d call them a liar. Next I’d tell them, good. Screw. There’s the door. There’s millions more where you came from, buttercup. Being a Patriots fan is not for the timid. It’s a tough world filled with nasty women and bad hombres and we don’t have time to worry about the feelings of delicate little flowers like Chuck Daly or some easily offended ukulele maker from Bridgewater. There’s a Wall to Defend. We would not die in that man’s company who fears his fellowship to die with us. So honk off. Beat it. Have fun next year pulling for the Jets or going apple picking on Sundays or whatever you plan to do with your life. You won’t be missed.