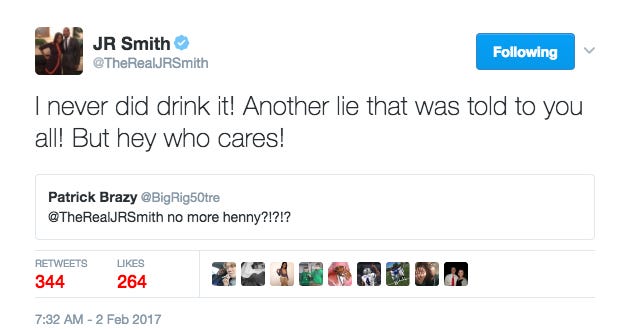 Of all the fake news and alternative facts flying around these days, J.R. Smith saying his lips have never touched a bottle of Henny has to be the craziest of them all, right? What’s Earl Smith going to tell us next? He’s a virgin? He likes passing more than shooting? The sky is orange? Roger Goodell has never heard of Barstool Sports? I don’t know if I can ever believe another word that comes out of J.R.’s Twitter anymore. And it’s not just because of the countless pictures that we have of J.R. clubbing. It’s also because every child of the 90s that drank liquor and truly loved hip hop had at least one go-round with Hennessy. Shit if we are in the truth tree, I’ll admit that I made myself a batch of Thug Passion as a freshman in college and sucked it down as tears welled up in my eyes. Shit was gross as fuck. But that’s just what you did back then. Or at least what idiot white posers like me did. You listened to Biggie and Pac, debated which was better, and occasionally drank swill like Hennessy, Alize, or that Avatar jizz known as Hpnotiq because we wanted to be like guys like J.R. Smith. So hearing he never drank Henny has completely shook me to my core and re-evaluating all of my life’s decisions. Okay, I do that every day as is. But this has me debating some of my drink choices as a younger man.

UPDATE 2: This is the greatest thing that has ever happened to me

Also shout out to Barstool’s basketball podcast Mickstape for being way ahead of this story when they said that LeBron definitely allows J.R. to smoke but told him no more drinking. As much as I hate to admit it, that would be A+ leadership out of Bron Bron if it was true.