Just had a bad game of Halo and one of my teammates sent me this message #BarstoolRunDown #OwnTheMoon pic.twitter.com/2xSo2qRb96

So I think I’ve mentioned it a few times but I recently started to get back into Halo. To be specific, Halo 3 on Xbox One the Master Chief Collection. I don’t play often but maybe once every 10 days or so I find a free hour or two so I toss on the headset and surf the multiplayer. Last night I had a few hours between leaving the office and the midnight #BarstoolRundown so I hopped on.

Well I’m not great and the people that still play Halo clearly have been playing it fucking nonstop for a decade so they absolutely dust me. I got no chance. They’re no-scoping me in the face left and right. Sticks from across the map. It’s so goddamn rattling and frustrating but also just feels good to be out there again. To spread the wings. I feel alive. A real Frank Underwood situation.

Well I had forgotten how psychotic these people are. I was having an exceptionally shitty game like way worse than normal and my teammate coolshooter658 was not happy with old Riggsy. He berated me in-game the whole time calling me a an inbred retarded person which is fine and pretty common but then after the game he went out of his way to seek out my gamertag, click on it, select “send a message,” record that little voicemail and send it to me. Laughed out loud when I heard it but also got a little nervous. You never know who’s a 4chan or Anonymous dude. That’s what makes them 4chan and Anonymous.

A few #geauxriggs guys had my back.

@RiggsBarstool don’t worry Riggs I got your back man. Teach him a lesson and plug the podcast. #ownthemoon pic.twitter.com/iv38tdUjtg 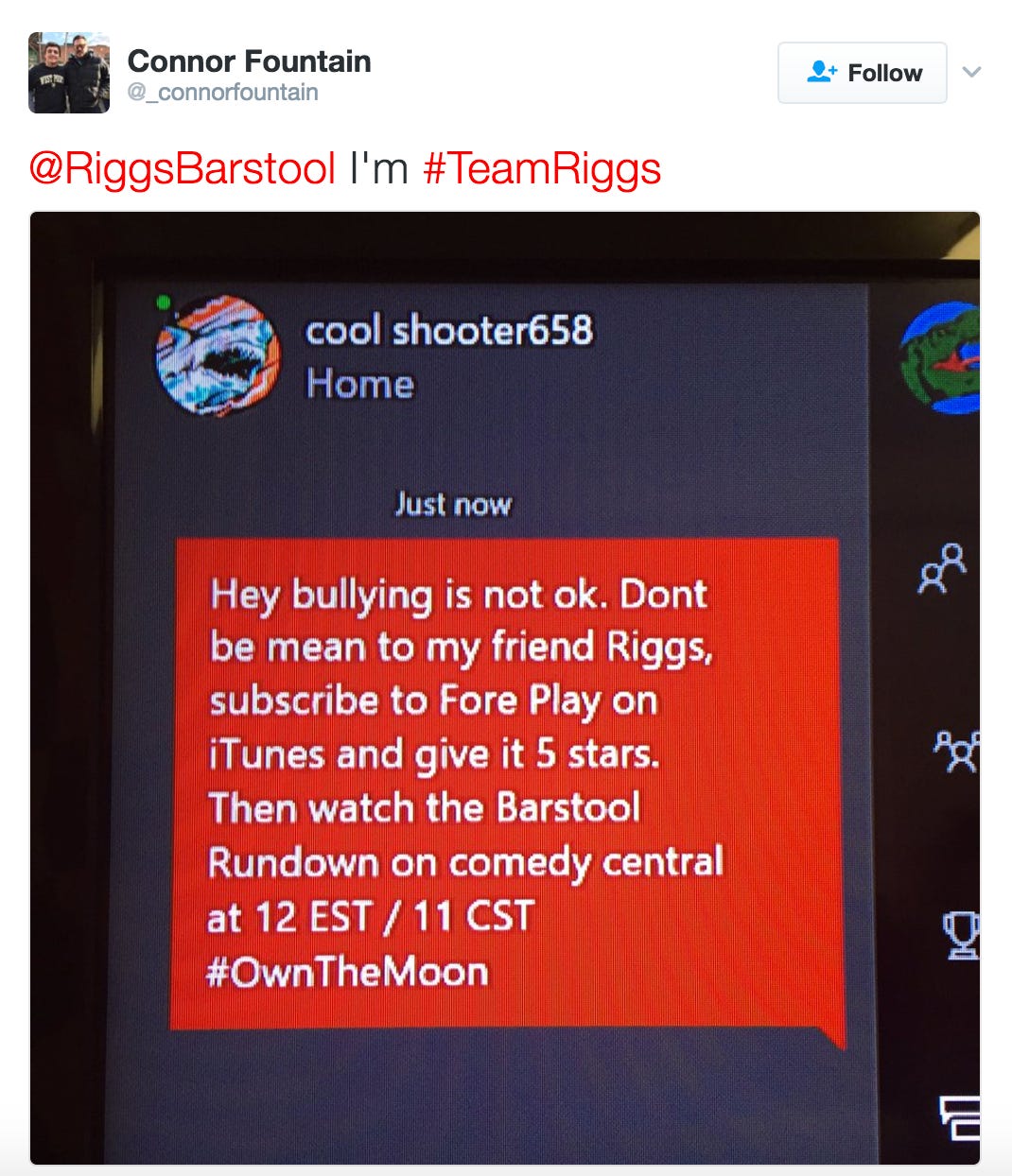 Thankful for them but also nervous that I’m now on coolshooter658’s radar. Just comes with the dangerous life of internet console gaming I guess.

PS — On a related note, in another game I picked up the sniper and one of my teammates immediately betrayed me to take my sniper. I went to retaliate and take it back but he just kept sniping me in the face and killing me. Happened about 4 times in a row. I was about to throw my controller out the window as I could hear he and his buddy laughing out loud at me.