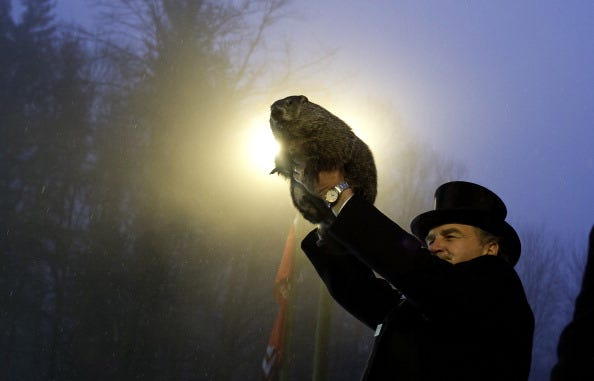 Punxsutawney Phil, the groundhog, has a job to do one morning out of the entire year. The dude’s offseason is 364 days, 365 if we’re in a leap year. But every year on the morning of February 2nd, it’s his Super Bowl. It’s his Game 7 of the Stanley Cup Final. Where some dude in an ironically out-dated hat rips him out of his slumber, throws him outside and now it’s up to Phil to determine if humanity is miserable for an extra 6 weeks of winter, or if all the dickheads in your office can comment on how excited they are for an early spring this year because man this weather sure has been brutal this winter, right? But yeah.Punxsutawney Phil has one big game every year and it’s a home game. All he has to do is step outside and say whether he sees his shadow or not. Today, he saw his shadow which means 6 more weeks of winter. But don’t start bitching about the weather just yet because here’s this little stat for everybody to break out later today.

Punxsutawney Phil is only shooting 39%. The guy has all year to train for this game and he’s still only right 1 out of every 3 times. I mean… let’s be real here. Does 39% get you into the Hall of Fame? I sure as shit hope not. Especially considering all the scandals that Phil has been involved in (if you don’t know about these, just look it up. I don’t want to go into detail here. This is a family website).

It’s just sad to see a guy who so many people look up to falter like this. I get there’s a ton of pressure that comes with the job. I get that beingPunxsutawney Phil can’t be an easy lifestyle to uphold. But if you want to have an honest discussions about the greatest groundhogs of all time, well I don’t think 39% Punx even comes close to sniffing that list. Which I’m sure makes sleeping easier every night on the groundhog from CaddyShack.

P.S. – Punxsutawney is closer to Pittsburgh than it is to Philly so don’t eve think about starting to blame us for this.