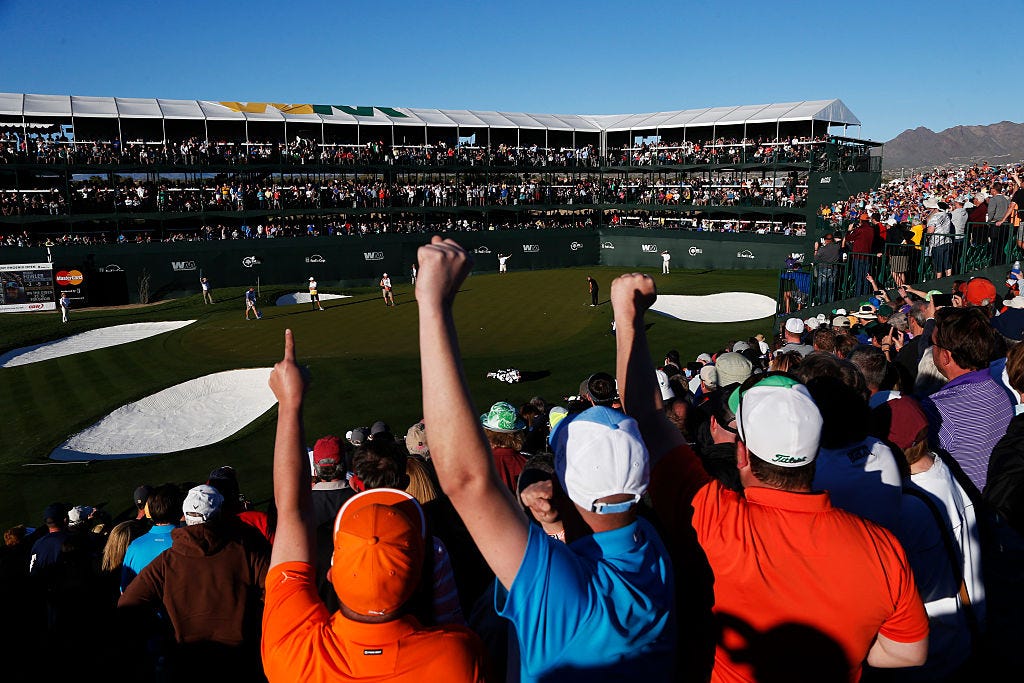 First of all, want to say thanks to all that have listened to, subscribed to, and given feedback to the Fore Play golf podcast. It’s something Trent and I have been workshopping for several months and once he made the move to NYC, we were able to get the green light. Just over 24 hours after its announcement and 12 hours after its first episode went live, Fore Play’s the #1 sports podcast in the universe (on iTunes) and #6 overall in the universe (on iTunes). By now you’ve seen all the promos and merch and the begging for downloads and subscribing so no need to put it here again. 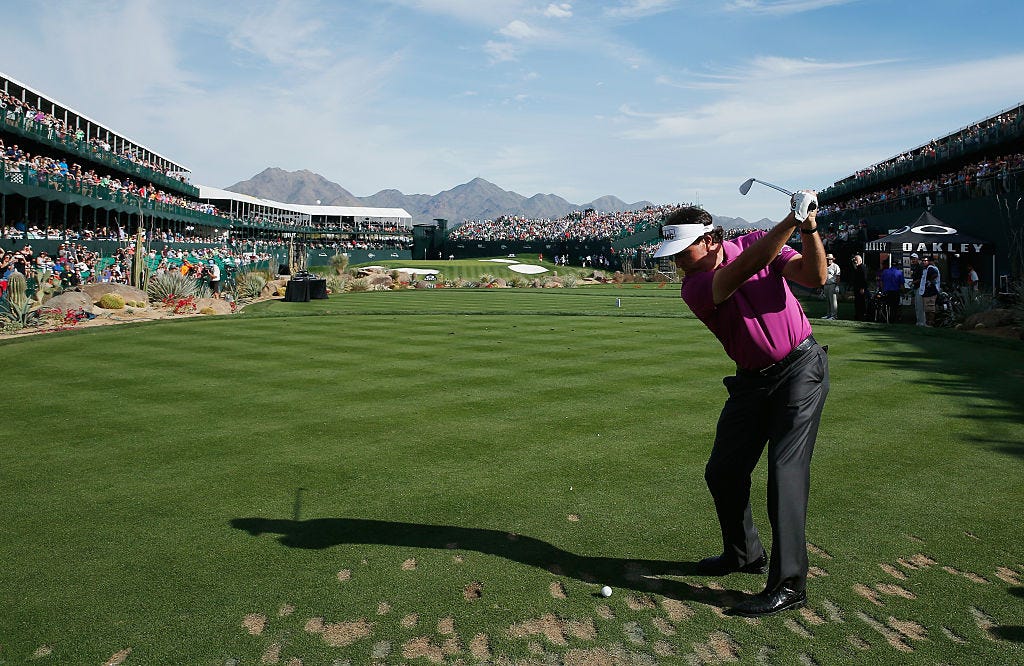 The Waste Management Phoenix Open at TPC Scottsdale is one of the more unique tourneys on Tour. One you circle on the calendar. And yes that reason is because the crowds. It’s to the Tour rotation what Fore Play is to traditional golf media — an rare jolt of acceptable debauchery in the game of golf.

Hundreds of thousands of folks turn out to just booze their faces off and watch golf. And make noise. In a game traditionally laced with “QUITE PLEASE” signs and death sentences for unsilenced camera clicks, what goes on at TPC Scottsdale’s 16th (and 17 other holes) is a wild change of direction. And it’s awesome.

Of course Tiger aced this one.

As did a robot.

And here it was today with Marky Mark.

You get the gist. It’s fun (we’ve deemed it the #StoolieOpen so if you’re going, go nuts, have fun, be safe, and send us all your footage). 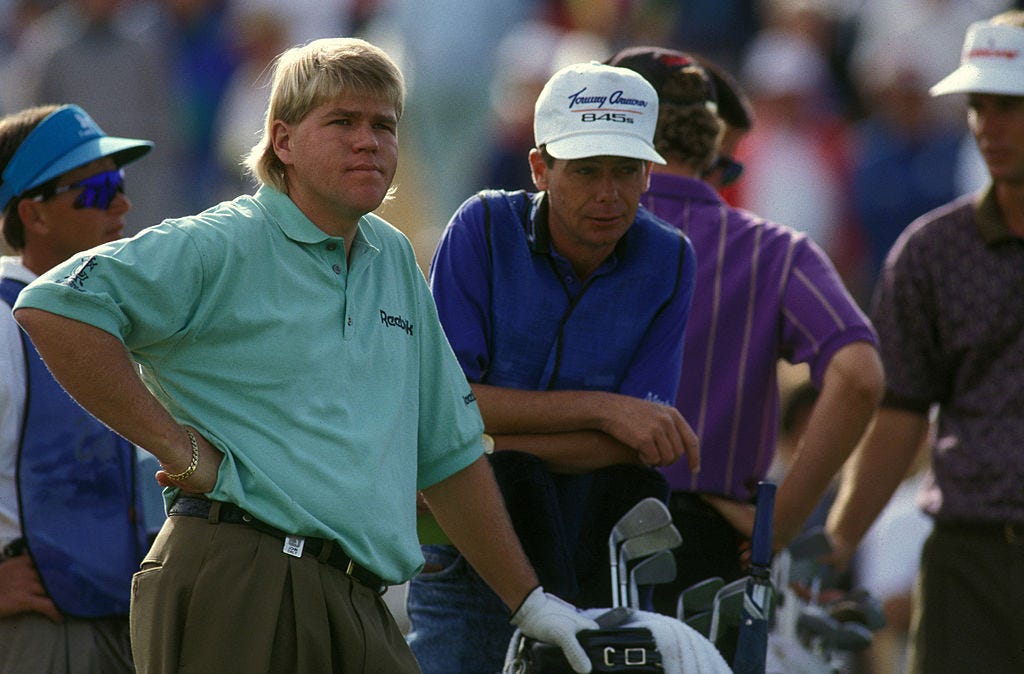 The Phoenix Open (previously the Arizona Open and the FBR Open) is an oldie. Established 85 years ago, it’s long been one of the staples of the early part of the PGA Tour season. It’s seen a lot of shit, but its most modernly famous moment was Phil Mickelson’s 59 1/2.

(which really adds to the lore that the gatekeepers don’t like Phil, when combined with this 62 1/2 at last year’s British Open)

Phil of course lost the British last year, but did win the Phoenix Open in 2013, 2005, and 1996 (tying Arnold Palmer, Gene Littler, and Mark Calcavecchia as the only players to have won here three times).

Hideki Matsuyama is our defending champ; he beat Rickie on the fourth playoff hole last year, which extended well into the first half of the Super Bowl (pray this does not happen again). 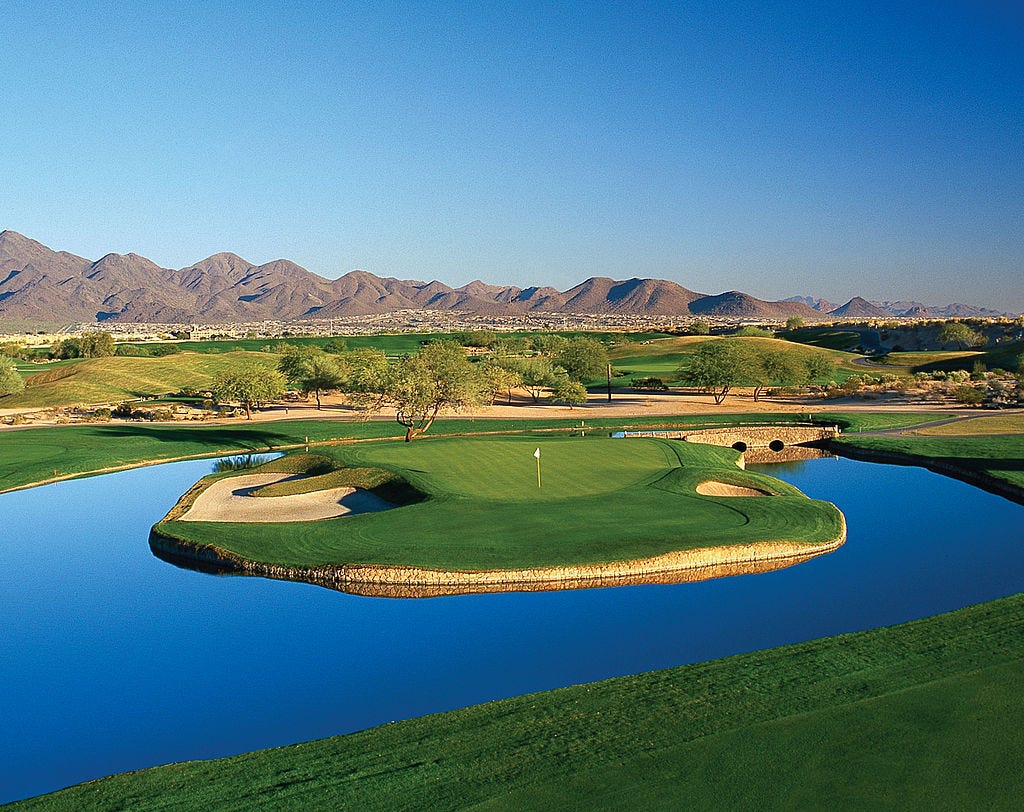 It gets a little cluttered with the massive galleries (over 200k people) and huge grandstands, but TPC Scottsdale’s Stadium Course is a beautiful, elite track. 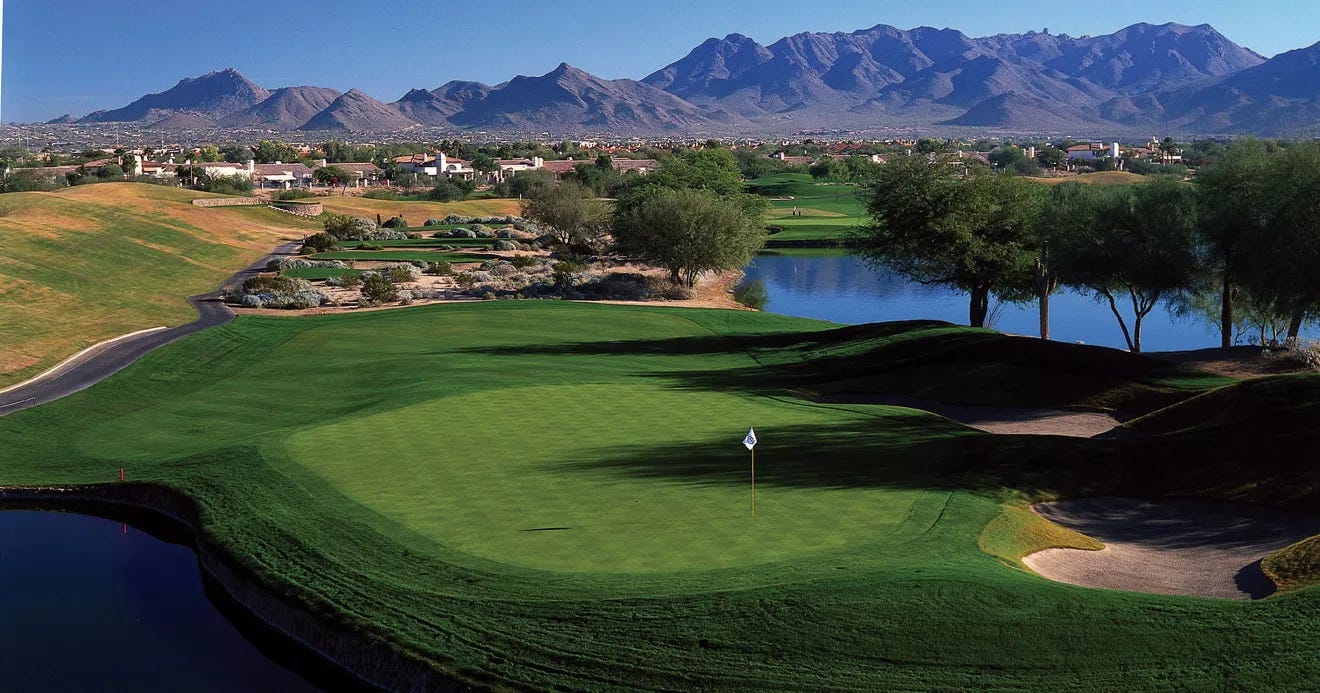 I mean look at this gem. At 192 these guys have got a mid to long-iron in with water hugging the right (and also ready to accept some Riggsy snipe hooks). What’s not to love? 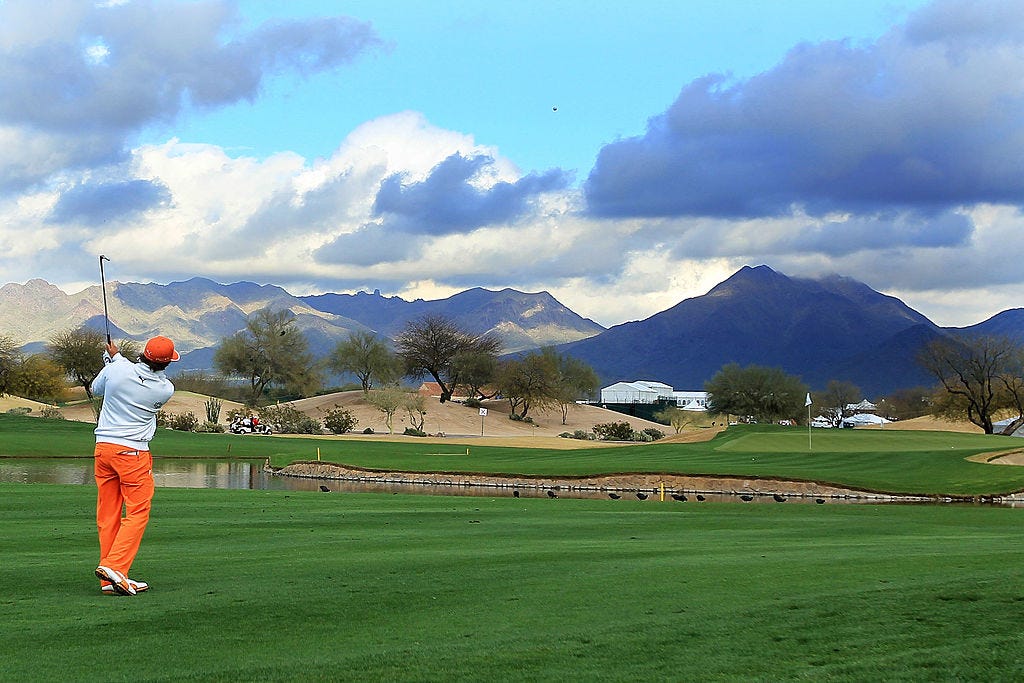 A classic risk/reward 5-par here. At 553, all of these guys can get home in two. That’s nothing for them. But with water basically everywhere, you can easily find yourself in a little DZ special. 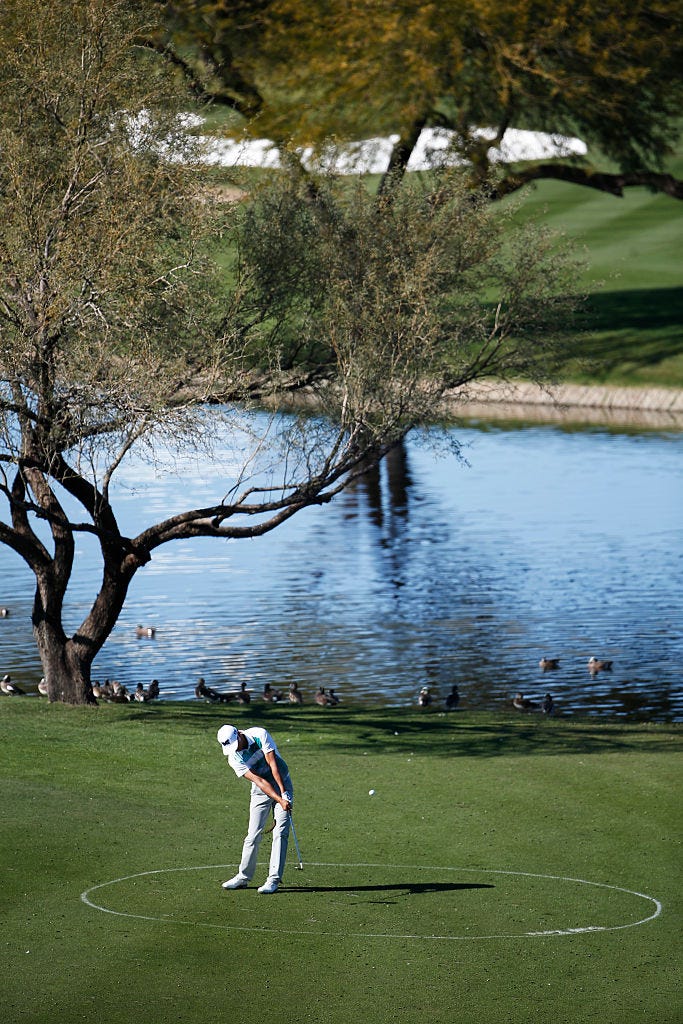 You know the drill at the 16th. 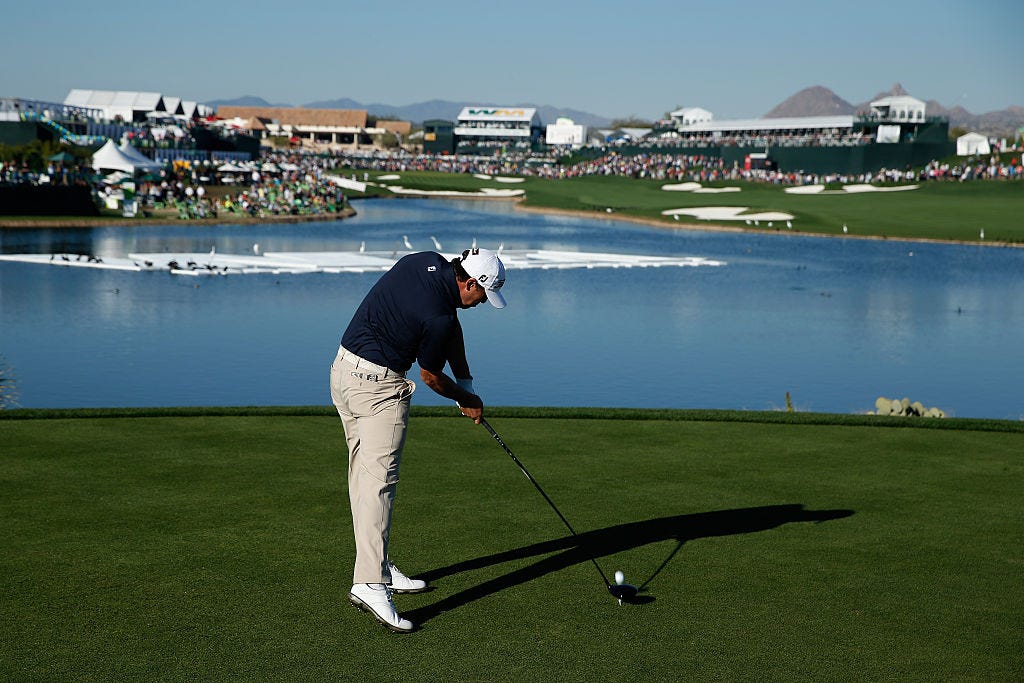 A gorgeous and manageable par-4 finisher, the 18th is a beauty. I birdied it on Tiger Woods ’13 last night, because I’m awesome, but with the nerves up it’s no joke closing things out. Expect anything from a 3s to 5s here.

-19. Course plays tough but just feels like guys are lighting EVERYTHING up these days. Torrey Pines played difficult last week, but just when you thought single-digits under could hold up, John Rahm makes two back-nine eagles and posts 13-under.

Don’t want it to get this low, but 19-under wins this week. I’ve never been wrong.

Justin Thomas has won back-to-back starts, three of his last five, and looked good and clean as fuck doing it. Hard to bet against him. But then again, the gambler in me is looking at the roulette table’s most recent numbers and saying “it can’t be red AGAIN, right?”

JT will be right in the mix, but don’t think he pulls off three in a row. I’m going with a bit of a dark horse here: Ryan Moore will win this week. He’s coming off a T-3 in his latest start and I’m still Ryder Cup emotional.

DFS greens are as firm as we will play all year. Slower side. Rough is demanding. Cactus have grown. Desert is rocky. Ball going long ways

Should I revise my winning score prediction? Eh, fuck it.

Tiger tees off in Dubai at 11:15 PM EST tonight. I’ve been to Dubai, no big deal. He’s coming off a tough MC-hammer at Torrey but playing three of the next four weeks. Let’s pray for no injuries and more fairways.

Trent and I will be in the office covering this bad boy throughout the weekend. Sunday it typically works out nicely, as they schedule it to run right up to the Super Bowl. Should be a good time.

If you don’t buy a towel you’re dumb.

Enjoy the tourney — one of my favorites of the year. Also root for Ollie Schniederjans — great dude and true hero for coming on with us idiots.