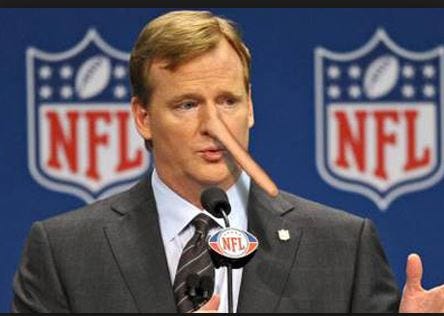 It’s always a good day when you get to see the company you work for be the subject of the biggest lie told by the most loathsome despot on the planet.

But claiming he had no idea who Barstool is or how we got banned from the Super Bowl was far from Roger Goodell’s only boldfaced lie. Ranking the others on a scale of 1 to “I’m not familiar with this”:

The Lie: “We have been very transparent about what we think the violation was.”

The Truth: The NFL has been as transparent as a solid block of depleted uranium. Tom Brady is still, to this day, the only one who ever spoke under oath, at his own request. And it was Brady’s side that released the transcripts of the hearing, over the NFL’s objection, after they flat out lied about it. The league then refused to release the data on what happens to footballs in the cold and lied when they said they never intended to make the numbers public. We use words like “transparent” to describe a life spent defending something. This ballsack uses it as a punchline.

The Lie: “I have no doubt that if I wanted to come up to a Patriots game and I asked Mr. Kraft, he would welcome me back. That is up to him though.”

The Truth: Jonathan Kraft said two weeks ago on the Patriots pregame show that teams don’t invite commissioners to come to games. The commissioners tell them when they’re coming. And every one of us will die without ever seeing this coward show his face in Foxboro again.

The Lie: “I would tell you it’s not awkward at all for me.”

The Truth: This is the most image conscious empty suited bureaucrat in America. The man who asked Peter King to publish a story he made up where he was tending bar in college and came to the defense of a black patron who was threatened by a racist with a gun, overpowered the assailant and kicked him out of the place. And who had the producers of “Draft Day” include a scene where he gets introduced to thunderous applause. Like all liars, he’s the hero of every story he makes up.

The Lie: “It’s not all personal in nature.”

The Truth: Why did Ray Rice skate after we watched him drag his girlfriend from an elevator like a corpse? Because Goodell gets to play Augusta National with the Ravens’ owner? How did Josh Brown get away with a one game suspension even knowing the league put his wife and kids in a safe house at the Pro Bowl to keep him from onsides kicking the shit out of them? Because Goodell is tight with the Maras. How does the head of officiating get away with hopping a stripper-filled party bus paid for by the Cowboys? Because Goodell is Jerry Jones’ sock puppet. It’s always personal.

The Lie: “You take your disagreements, find a common place and move forward. That is what it is.”

The Truth: I missed that part where we found “a common place” when the draft picks, fine and suspension were handed down.

The Lie: “We applied a process and a discipline and we came to a conclusion that was supported by the facts.”

The Truth: The psi measurements, the D’Qwell Jackson cover story, Exponent, the Ideal Gas Law, PV=nRT, etc. etc. Ted Wells shot an arrow and then used alternative facts to draw a bullseye around it.