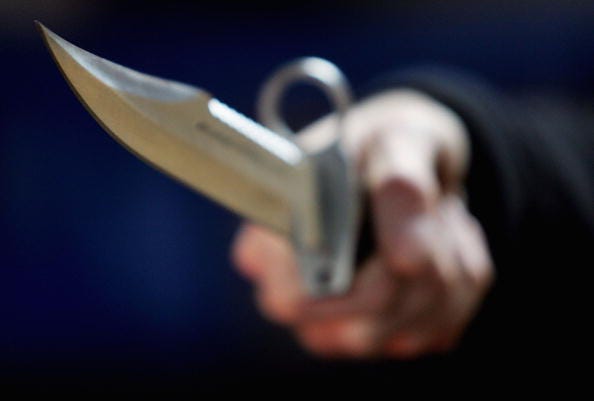 WTVR – A woman set up a date at a Lynnwood, Washington hotel with the intent of killing a man she met online and eating his heart, police said.

The suspect later told Lynnwood detectives that the gruesome plan was just one step in her bid to become a serial killer, according to police.

The man told police the woman asked him several times if he was a serial killer. He told her “No,” and she climbed on top of him and said, “Well I am a serial killer” as she grabbed a pocket knife, according to court documents.

The woman then stabbed him in the chest, according to police, before he eventually broke free, got out of the room and dialed 911 from the hotel office. The victim told police that he had a difficult time fighting her off because of her weight.

According to police, the suspect said “I’m a loon” when they asked what happened, and said she wanted to become a serial killer and planned to stab the victim to death.

PREVIOUSLY: This 17-Year-Old Chick’s Description Of Stabbing Some Woman 21 Times Is One Of The Wildest Works Of Writing I’ve Ever Read

So there are social theories that a lot of the reason some crimes are primarily male-specific crimes is because men have been in the lead seat for so long, centuries of being decision makers, breadwinners, people in a position of power. But as the wage gap closes and women gain a more prominent voice in media and business, the tides are turning. You can even see it online these days…if the Fappening happened in 2017, it would be a media blackout and websites would publicly shame anyone tweeting in or taking part in that invasion of privacy. But women were not only covering it gleefully when the same thing happened to famous men recently, they were DMing in their own screenshots of athletes and celebrities without a single person giving them shit for it. There’s a power shift going on, one that teeters on hypocritical at times, but it’s happening.

And as women continue to equal up to men or pass them in a lot of respects socially, my belief is that you’ll see more crimes like this pop up. People have said for years “serial killing is a white male crime.” But maybe it’s not a white male crime as much as it is a “person in the pole position” crime. This girl wants to be a serial killer and eat hearts, that 17-year-old who stabbed the chick 21 times wanted to feel what it was like to kill someone….two’s a coincidence and three’s a trend. All I’m saying is don’t be shocked when all the female jockeying for position has a butterfly effect on things and ends with a massive rise in female violent crime. Heavy is the head that wears the crown. At this point the only thing left to save us is their own incompetence: This lady committed a murder/heart sacrifice double platter as skillfully as she probably parallel parks. But once they figure it out? Watch out.

And when we have a year of horrific crimes like this under our belt in 2017, we can look back at this blog calling it before it happened as a very prescient moment. I’m like Malcolm Gladwell with social theories minus the research or success or looking like my hair care process consists of fingerfucking an electrical outlet.