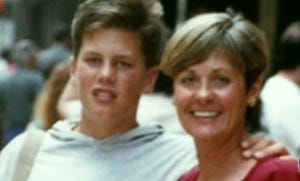 Asked on Tuesday what elicited that emotion, Brady acknowledged, “It’s been a challenging year for my family, just for some personal reasons. It’ll just be nice having everyone here watching us this weekend. That’s my mom and dad. They’ve been so supportive my entire life, it’s nice to be able to show them . . . to try to make them proud . . . My mom hasn’t been to a game this season. My dad has been to [only] one. It’s very atypical.”

A Brady family source told me Tuesday that Brady’s mother, Galynn, has been dealing with health issues for the past 18 months. She’s been doing much better recently, but her illness has been a major source of concern for the family, including Tom Brady Sr., and Brady’s sisters, Julie, Maureen and Nancy.

This is serious, actual life stuff so I’ll hit “pause” on the usual sarcasm and pro-Boston Masshole ranting and just talk real for a moment. And not to get all first person pronoun-y on you, but I’ve known about this for a couple of months now, but was asked not to say anything.

A family friend of the Brady’s reached out to me through a mutual acquaintance. The reason, he said, was that he wanted to tell me the real reason why Brady dropped his appeal. I’ll confess that he had me nervous, like he was going to say Brady really did cheat and didn’t want the truth to come out or whatever. Which would mean everything I and everyone I care about believes in is a lie. Well, it wasn’t that. The real reason was a billion times worse. And it’s this story. It’s about Mrs. Brady being sick.

According to the source whom I spoke to, at some point the appeal and the legal maneuvering and all the stories on the news about her son being a liar and a phone-destroying cheat were too much to put her through. The NFLPAs lawyers said there wasn’t a great shot at getting a hearing before the Supreme Court anyway, but ultimately the decision to drop the appeal came down to Brady worrying about his mother’s health and wanting to put the whole witch hunt in the past, which is the only proper place for witch hunts. Besides, it gave him the added bonus of four weeks during the season to make visits to the family back in California.

So this is the subtext of everything the Bradys have been dealing with. Why Brady choked when he gave the “Hi to my beautiful mom” to Jim Nantz after the AFC championship game. Why he teared up being asked who his hero is by a little kid at Media Day. And why it’s been industrial strength hard not to bring up his mom’s struggles when the world is saying he dropped his appeal because he knows he’s guilty. Or he’s a monster for being friends with the leader of the free world. Or media people like Shannon Sharpe and Mad Dog Russo are saying Tom Sr. needs to sit down and keep his mouth shut for defending his son.

Anyway, I’ve buried the lede here. Now that the story is out, the only thing that matters is this news that she seems to be doing better. Thoughts and prayers that we’ll be hearing the same thing many years from now. We now return you to the usual nonsense.