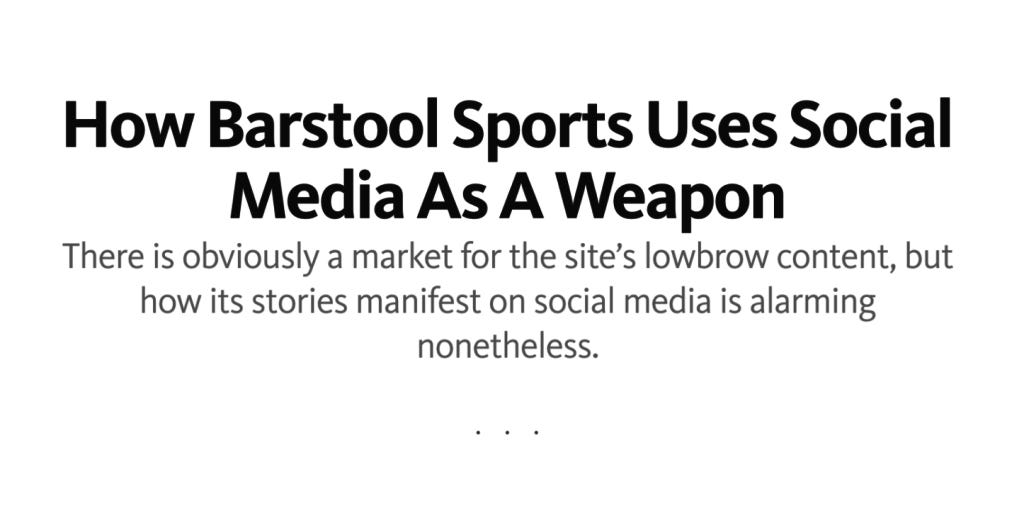 Awful Announcing – Sports site The Cauldron is no longer affiliated with Time Inc. and Sports Illustrated. Their website (which hasn’t published a story since Jan. 24) retained a “Presented By Sports Illustrated®” on its “About” page in the “Note from the editor” section for much of Tuesday, but that has since been replaced by “Athlete-direct content (and a whole lot more),” and while their Twitter bio still includes links to si.com, those are expected to disappear shortly. A Time Inc. spokesperson told Awful Announcing Tuesday that “We had a limited licensing agreement with The Cauldron and upon routine review decided to move in a different direction.”

From the Time Inc. side, that’s been the only official comment so far on why they parted ways with The Cauldron. Cauldron founder and editor-in-chief Jamie O’Grady did not return a request for comment. While both sides are being tight lipped about the split, a source to Awful Announcing paints a picture of strained relationship that ultimately proved to be untenable.

The Cauldron also ran numerous athlete pieces, including ones from Steph Curry and Le’Veon Bell. It got a fair bit of attention, especially when it came to pieces picked up by or promoted by SI. There was some notable drama around the site as well, though, particularly when it came to O’Grady’s public feuds with Barstool, Vice, and Deadspin and to freelancer John Gorman’s tweets about the Dallas police shootings.

And just because I work at a booming internet website and you guys topped out at 14 readers a day and are now shut down forever doesn’t mean I think I know more than you do or anything. But I would just say that, if I had to venture a guess, letting unpaid unknown freelancers write longform slam pieces of popular websites for the sole reason of getting Twitter followers and impressing a chick on Twitter then publishing it and mass distributing it is NOT the most sustainable business plan. I mean it turns out I’m right in this case but who knows.

Oh and Awful Announcing if you’re wondering why Jamie O’Grady did not return a request for comment it’s because he has you blocked on Twitter and email and phone and life in general. Dude loves blocking more than he loves breathing air.

Bart Hubbuch and Jamie O’Grady dead all in one week? Barstool Sports ratings on Comedy Central through the roof? Not a god guy but the Internet God? He’s real. Oh he’s real.