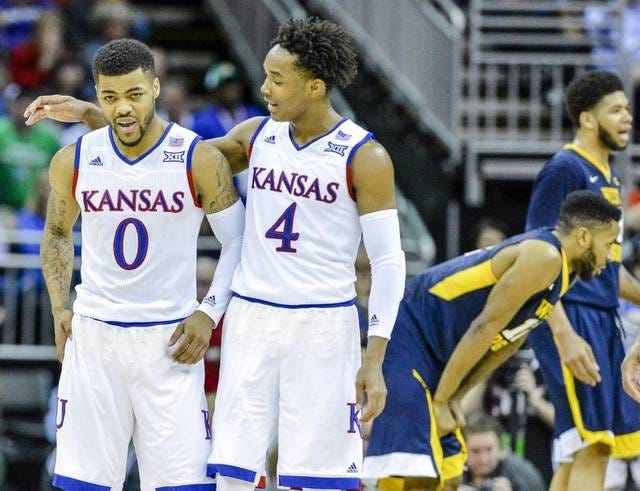 I don’t think many expected a top-5 matchup in February outside of the ACC this season. But here we are as No. 2 Baylor goes to Phog Allen tonight to play No. 3 Kansas. Both teams are currently sitting at the top of the Big 12 standings with the lone loss coming at West Virginia. They are both coming off games on Saturday where they got road wins and had to come back in order to do so. Kansas obviously getting the notable win at Rupp Arena while Baylor escaped Ole Miss.

This isn’t one of those winner take all situations, especially because it’s hard to see either team running the table the rest of the season in this conference, but it’s one to pay attention to long term. The winner of this again keeps a leg up in race for a No. 1 seed as both are well in the race (and both on the top line as of right now).

So what do you need to know about tonight?

– Expect to see a lot of zone from both teams. If you watch Baylor, you know they prefer to run that 1-1-3 zone, where they slow offenses down. It’s been the calling card of Baylor for the last few years now as Drew likes this zone to be aggressive. Kansas meanwhile has been forced to play a 2-3 zone, which was wildly effective against Kentucky. Between the defensive struggles this year and now being short-handed, especially in the post, Self has to rely on this. There won’t be any junk defenses like the triange-and-2 we saw against Kentucky, but expect a lot of 2-3 zone.

– This game will fall on Landen Lucas defensively again and this will be a common thing going forward. While Lucas fouled out against Kentucky, he played well and took away Bam Adebayo in what was Kentucky’s best mismatch. Tonight he’ll face Johnthan Motley (an All-American candidate) and/or Jo Lual-Acuil. Lucas needs to continue to play strong defensively and not let teams take advantage of the mismatch.

– Offensively if Josh Jackson shoots the ball average, Kansas should be just fine. The way Baylor’s defense rotates, it will give up some open looks if you attack correctly. Mason and Graham both do a great job of getting in the lane and looking for kicks. Most teams want to leave Jackson open because he’s shooting 32% from 3 opposed to Mason, Graham and Svi. Against Kentucky he went 2-5 from 3 and 7-12 from the field. He looked like the best player on the court and in 99% of games he’s the most talented. He needs to take over again.

– If Kansas does run a lot of 2-3 zone, Manu Lecomte and Al Freeman need to be ready to shoot. Lecomte has played well this year after transferring from Miami and is shooting 41% from 3 this year. The Kansas 2-3 zone isn’t great, but it is made to slow offenses down. If the ball can rotate from Motley in the post, to the wing, there will be looks. The Kansas zone does have a tendency to overcommit up top as I highlighted on Saturday. That leaves the opposite wing the chance to have a clean look, if the ball is rotated correctly.

– There is some drama going around Kansas right now. Carlton Bragg is suspended for drug paraphernalia. A new report came out that last year ‘Lagerald Vick likely hit a woman and the school recommended probation.’ On top of that KU police are investigating the alleged rape of a 16-year old that took place at McCarthy Hall where the basketball team among a few other students live. Note, no one from the team has been accused in the alleged rape, just that it took place there. There’s a lot going on off the court for this team and the fact is these are still kids that have to go play the game.

– What happens at the free throw line? Kansas is absolutely brutal from the line, shooting just 63% as a team, ranking 337th in the country. They don’t even get to the line a ton as they rank 214th there. That’s a huge advantage for Baylor to steal points on the road. The Bears shoot 72.6% while they get there a decent amount.

– It’s tough to go in and win at Phog Allen. But, this Baylor team is legit. They have an All-American. They have great role players and Scott Drew is a decent coach. That 1-1-3 zone does mess up some offenses, but we’re talking about Kansas at home here. This is the last of the hellish 3-game stretch for the Jayhawks and I think we’re starting to see Josh Jackson play with confidence. That’s a dangerous thing for a team that has a NPOY favorite in Frank Mason. I’ll take Kansas -6 at home.