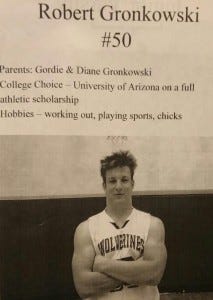 Swierski [said], “So we’re playing a home game and we have 68 points – now it’s not a blowout, but it’s not a particularly close game either. So he [Gronkowski] gets fouled and goes to the free throw line. He hits the first one to get us to 69 and the place goes nuts because he’s playing into it. On his next free throw, he purposely chucks the ball off the backboard and misses so the score would stay at 69 and then runs back on defense pointing at the scoreboard.”

What’s that expression, “The boy is father to the man”? I never exactly understood it until this moment. If you thought that Gronk just hit adulthood and decided that 69 has to be the punchline to every joke, or that he picked up his proclivity for 69-related humor at U. of Arizona or something, well guess again. The boy that was Rob Gronkowski fully comprehended the awesome power of 69 comedy and unleashed it upon his classmates the way he would to the world as an adult.

And that is how his legend was born. His 69-ing, working out, playing sports and chicks-enthusiast legend. I have to admit, if his hobbies included say, showtunes or reading books, I would’ve been devastated. I’d add “Don’t ever change, Gronk.” But I think we’re pretty safe on that one.