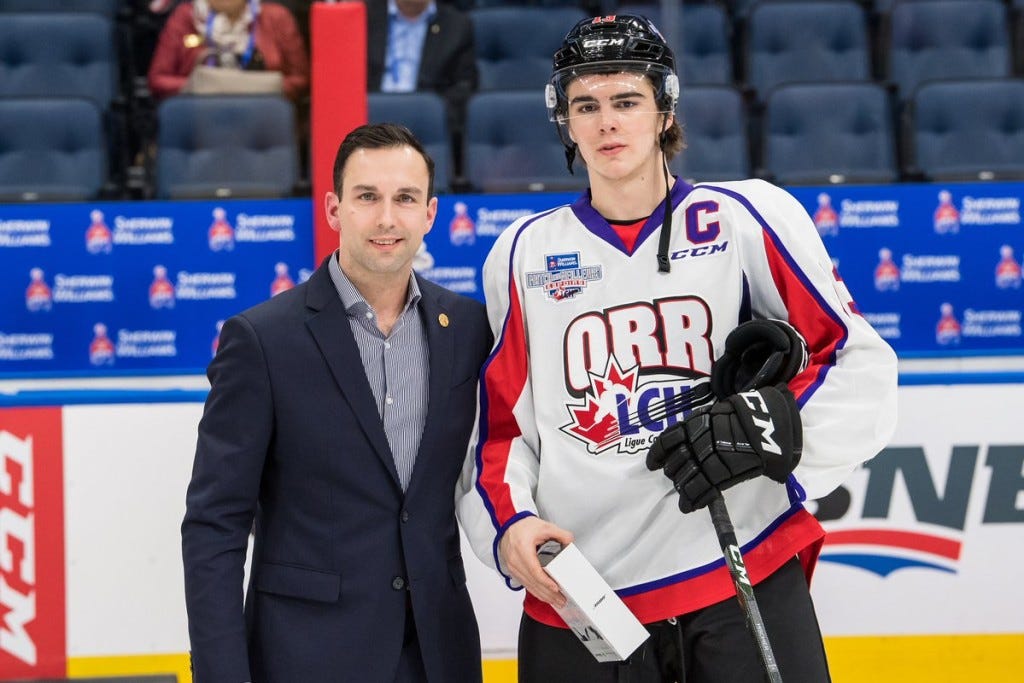 I understand that I’m trying to reach a very small demographic here talking about the CHL Top Prospects Game. I’m sure this is going to be a “who cares” or “no it’s not” type of blog for plenty of people out there. But for the handful of Stoolies in the world who are interested in this game and the future generations of the NHL, the Team Orr vs Team Cherry game is appointment television each year. Because there are 31 1st round picks to be made on June 23rd this year in Chicago, and I’d say at least 20 of them were on the ice last night.

Obviously the match up that everybody was tuning in to see was going to be #1 Central Scouting ranked Nolan Patrick (Brandon/CAN) vs #2 Central Scouting ranked Nico Hischier (Halifax/SUI). Patrick has been the consensus #1 pick in this draft class since the moment Auston Matthews was drafted last year. But he’s missed 35 games this year with a groin injury, which also caused him to miss playing in the World Juniors for Team Canada. So for a lot of people who don’t get to watch too many Brandon Wheat Kings games, this was the first time they really got to see him in action.

Nico Hischier has quickly been making a name for himself this year. He first really jumped on the scene back in October and you can read the Dangle Days post about it here. Then there was the USA vs Switzerland World Juniors Quarterfinal game where Hischier took over with 2 quick goals and was an impossible glove save away from a hat trick. And then last night there was this.

A Nolan Patrick turnover leading to a Nico Hischier breakaway goal. I think that was more of a metaphor than anything.

Perfect backhand sauce from Nikita Popugaev and then Hischier shows that if you open that 5-hole for just a split second for the kid, he’s going to end you. Patrick has the size advantage on Hischier and the talent level is pretty much equal. But Hischier has proved time and time again this year that he’s an electrifying goal scorer. The Colorado Avalanche currently have a goal differential of -63 soooooo yeah, they could definitely use some more goals if they end up with that #1 overall pick. Plus, they’ve already grabbed a Halifax Moosehead with the #1 overall pick before with Nathan MacKinnon. Maybe this could just become a tradition for them.

Hischier also had 2 assists on the night. This one to Kailer Yamamoto (Spokane/USA) seemed rather unfair.

Yamamoto is another kid who has been featured on Dangle Days this season and he just gave everybody free tickets to the Snipe Show with that goal. But watch how much attention Hischier draws to himself every time the puck is on his stick. He takes away 3 defenders right off the bat just because he’s carrying the puck. That opens up all the space in the world for Yamamoto to just walk right in and snipe away.

Now it’s not like Nolan Patrick did nothing all night. The kid had 2 assists and his team ended up with the 7-5 win. 2 points and a win for Nolan Patrick vs 3 points on the loss for Hischier. But if we’re talking about who made the biggest impact and who demanded the most attention on the night, it’s Hischier. I get that this is an all star game and it’s tough to really judge guys in that setting. But for the past few years, we’ve known who that 1st name getting called was going to be a year in advance. We knew McDavid was going #1 as soon as the 2014 draft ended. We knew Auston Matthews was going #1 as soon as the 2015 draft ended. I wouldn’t be surprised if Hischier overtakes Patrick with that #1 overall spot and I also wouldn’t be surprised if Nolan Patrick hangs on to it. And we won’t know how it goes down until June 23.