Watch: @chelseahandler says she won’t interview Melania Trump.
Also: Chelsea Handler is still in the US after promising to move. pic.twitter.com/GesfVzJYzb

Trump said Melania will give two or three more speeches… Hopefully an interpreter will be present. — Chelsea Handler (@chelseahandler) October 28, 2016

@karen_snowdy @MELANIATRUMP just as soon as she learns how to speak English — Chelsea Handler (@chelseahandler) July 19, 2016

Once again I find myself sitting here in January of 2017, as we count down to the Seventh Seal being broken and the End of Days coming at last, trying my level best to figure out where the line is drawn. Where the SJWs and good, zealous feminists like Chelsea Handler tell me right from wrong. I want to conform. I really do. I consider myself a decent, if flawed, guy. I try not to use trigger words or show the slightest particle of intolerance. But I’m a little unclear on when you can make fun of an immigrant’s English – over and over again – without it being a hate crime.

Melania Trump is from the former Yugoslavia, and English is apparently her fifth language, after Slovene, German, French and Italian. She’s also married to a billionaire President of the United States. And has the face and body of the Bond Girl 007 bangs in the first act but can’t decide if she’s on his side or a double agent until the end of the movie. So I’m not going to burn too many calories worrying about her feelings. I’m just trying to get a ruling on when it’s OK to tool on an immigrant for speaking with an accent. Because I’m not hearing the screams of righteous indignation from the usual Speech Police who’d be calling for the end to a comic’s career if he/she goofed on the way … just to pull a random example out of my ass … Sofia Vergara talks. Or maybe you can make fun of Vergara because she’s also crazy attractive in the way you couldn’t, say, some Dominican ballplayer. I don’t know. Because again, I’m looking for a rules clarification on this one.

Maybe it just comes down to who’s doing the belittling? Like Chelsea Handler is an angry feminist with a closet full of pussy hats so she gets a permission slip to say whatever she wants. But if I work a comedy club this week and decide for the first time ever I’m going to tell Mexican jokes or create some wacky stereotype Asian character, I’ll never work again? Is that how it works now?

My point is, I’ll do whatever Chelsea and the Trump-deranged feminists want. I just need them spell out the rules for me, because I don’t get it. 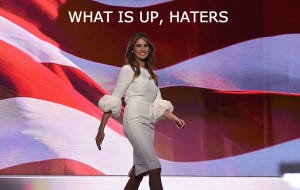