Martyr: (noun) someone who sacrifices their life and/or likelihood [their job as an NHL head coach] in the name of principle [turning the season around] 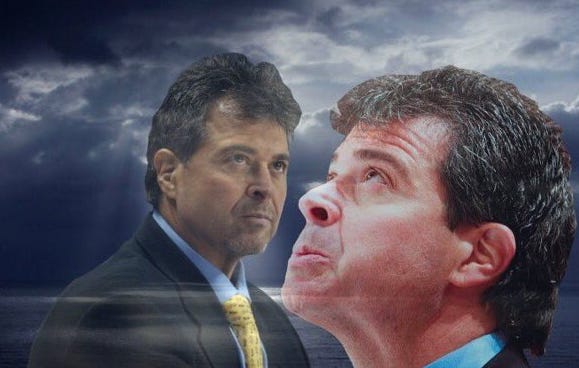 I’m not the religious type but if there’s one word that best describes the Islanders sudden turnaround since firing Yung Cappy it 1000% is “miracle.”

In the first 5 games since Cap’s dismissal [sacrifice] the Isles are 4-0-1 and have outscored their opponents by double digits. JT is back to doing JT things, Andrew Ladd is having real life multi-goal games and the skill players this team employs are, dare I say it, playing with skill.

This new injection of offense mixed with Thomas Greiss continuing to be one of the most reliable goalies in hockey right now has me so far away from that ledge I was perched on just a week ago that I can’t even see the cliff. I mean I’m back at the lodge listening to Love On The Weekend sipping cocoa while Avs fans are looking over their shoulder saying “I thought we were jumping together?”

Not today my most likely stoned friends. Not today. There will be a day when this team drives me to complete and utter madness, but *extremely Return of the King™ voice* today is not that day.

Now, don’t take this blog as me saying that Capuano was the root of all the adversity this team has faced dating back to October. I said it when he was initially fired, Cappy was given an unfair chance at recreating the magic that was last season and ultimately served as the scapegoat [martyr] when things went south. But anyone would be hard-pressed to say that him leaving and interim *wink-wink* head coach Doug Weight taking over wasn’t the catalyst for this team’s quick turnaround.

After picking up 9 of a possible 10 points the Isles now find themselves just 5 out of the final wildcard spot with a TON of hockey left to play. Now, things can settle down and this team can, of course, turn back into the pumpkin they were mere days ago. Cause if there’s one thing we’ve learned these past 12 months it’s that as quickly as you can go from the basement to the penthouse you can go from the penthouse to out on the streets, but the fact that this team is back in contention is enough to put that certain pep back in my step.

The Islanders have finally dug themselves out of the hole with a little under half the season left to play, with luck on their side at the moment, and everything beginning to click, we might just now be seeing glimpses of the team we expected to see back in October.

PS – Here’s a little truth bomb for those who like to tell me I value any and all Islanders goaltenders way too high. Swimming.