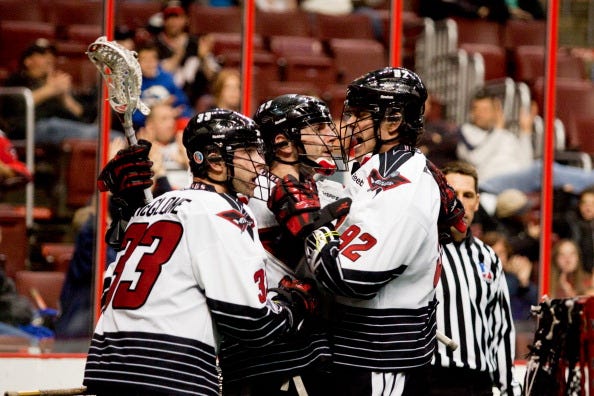 Philadelphia Business Journal – New NLL Commissioner says team in Phila. is ‘absolute must’. … The former Philadelphia Union CEO who is now running the National Lacrosse League outlines his game plan for the NLL.

Alright so the article the NLL linked in this tweet brings you to a site with a paywall so I have no idea what was actually said in the post itself other than the quick blurb above. You’d think a professional sports league would be able to write up their own presser on a quote given by their own commissioner. But then again you’d think a professional sports league also wouldn’t make their logo with Microsoft WordArt.

With that being said, the NLL moved their headquarters to Conshohocken this past summer and the commish used to be the CEO of the Philadelphia Union. So when the NLL says a team in Philadelphia is an “absolute must”, well I believe that falls under the category of “uhhhh ya think?”. Taking the Philadelphia Wings out of Philly was the worst decision in the world to begin with. Anyone who has ever been to a Philadelphia Wings game or any NLL game knows that the atmosphere is electric. Those games breed alcoholics. If you’re going to a box lacrosse game, you’re guaranteed a few things. 1) You’re going to get wasted, 2) you’re going to see quite a few fights, 3) chances are you might even see some old lady’s titties. There’s nothing to not love about that. I guarantee you that anybody in the area who was born before 1995 has made some of their best underage drinking memories at a Wings game. The Eagles may be the identity of this city. The Flyers and Sixers are right up there too. But no team and no game better symbolizes the city of Philadelphia than the Wings and the National Lacrosse League. It’s a match made in heaven but only if heaven were the pits of hell.

So get ready to break out that $20 check your grandmom got you for Christmas. You’re gonna want to spend it on some season tickets right away.

Not the Wings but still a great clips here.

P.S. – If they’re not the Philadelphia Wings, we riot. Also–I hope Wing Nut is still around to see all of this.