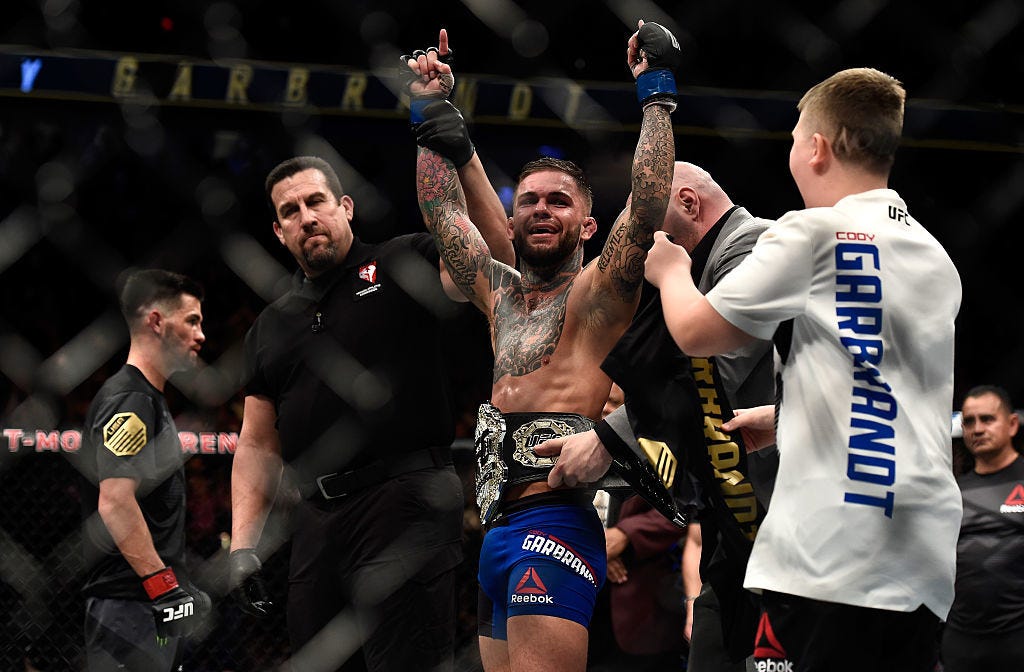 MMAFighting- The UFC has picked the rival coaches for new season of The Ultimate Fighter.

The promotion announced on Sunday, that newly crowned bantamweight champion Cody Garbrandt will coach season 25 of The Ultimate Fighter, along with his former teammate and now next challenger for the title T.J. Dillashaw.

The two bantamweights will coach a cast of welterweights who are former TUF winners or past contestants. The cast also includes one current fighter that’s on the UFC roster. This season of TUF is being labeled as The Ultimate Fighter: Redemption and it will premiere with a two-hour episode on Wednesday, April 19 at 10 p.m. ET. on FOX Sports 1.

Get ready for the most hardo, “JUST BLEED”, “I’m gonna fuck you up motherfucker”, “You’re a pussy” trash talk of all time. The whole storyline of Team Alpha Male vs Elevation Fight Team is great, TJ being the man who walked out on Alpha Male, Cody being the new face of the gym. On paper, that alone should make it one of the best seasons of TUF ever. We’re looking at two MMA guys that aren’t funny and don’t know how to trash talk, however, so there’s probably gonna be more cringeworthy moments than captivating ones. See: Cody “I’ll Do Something About It” Garbrandt start a scuffle with Conor McGregor.

At the very least, this season will culminate in the coaches fighting (like most TUF seasons), and you can keep that in the back of your head while putting up with their mediocre social skills. Garbrandt/Dillashaw will be a banger of massive proportions.

The “redemption” aspect intrigues me, but I feel like if they’re going to do another redemption season they don’t need coaches. Just throw them in the house, provide them with alcohol (preferably Bacardi Oakheart, shoutout Oaks and Cokes), and let ‘em go nuts. I’ll be sure to suffer through every episode and let you guys know if anything noteworthy happens.