A husband in Japan went for 20 years without speaking to his wife because he was jealous of the attention she paid to their children, according to reports.

Eventually, the couple’s desperate 18-year-old son wrote to a Hokkaido TV show asking them to fix the situation as he had never heard his parents have a conversation.

Dad Otou Katayama would reportedly only grunt and nod in response to wife Yumi’s efforts to speak to him, despite the pair having three grown-up children.

Im a pouter. When I dont get my way, I pout my dick off. Yeah, sometimes I wanna pick the restaurant for the family dinners. So shoot me, again. The problem is that no one else really likes wings as much as I do and, admittedly, the lines can get rather long. I’ll sulk in the car and eventually end up driving to a pizza place or some shit. It’s fine. I pout on the drive and then cheer up after ordering an adult beverage or two. I start talking to my family about half a beer in and then the sulk party is over.

Otou Katayama took it a few million steps farther than I ever would. Some people say that pouting for 2 years is a long time. Some say that a 5 year pout is impressive. Otuo didn’t speak to his wife for twenty fucking years because he was jealous of the attention that the kids were getting. Just an outrageous display of pettiness.

Otou is the king of downplaying a problem, too.

“Somehow it’s been a while since we talked,” said Mr Katayama, from Nara, in southern Japan, according to a Daily Mail report.

“You were so concerned about the kids.

“Yumi, up until now, you have endured a lot of hardship. I want you to know I’m grateful for everything.”

He said he was envious of the attention she gave the children.

“I was kind of… jealous. I was sulking about it. There’s no going back now I guess.”

Saying that it’s been a while since we talked and I was sulking about it after not speaking for 20 years is the understatement of 2017 so far. Gonna be hard to top.

No way she doesn’t try to hold this 20-year sulk over his head when they get in their first argument post-unsulk. If I know Otou at all, he’s gonna back sulking again. Can’t wait to see them back on this bench in 20 years going through this dog and pony show again. Once a historic pouter, always a historic pouter. 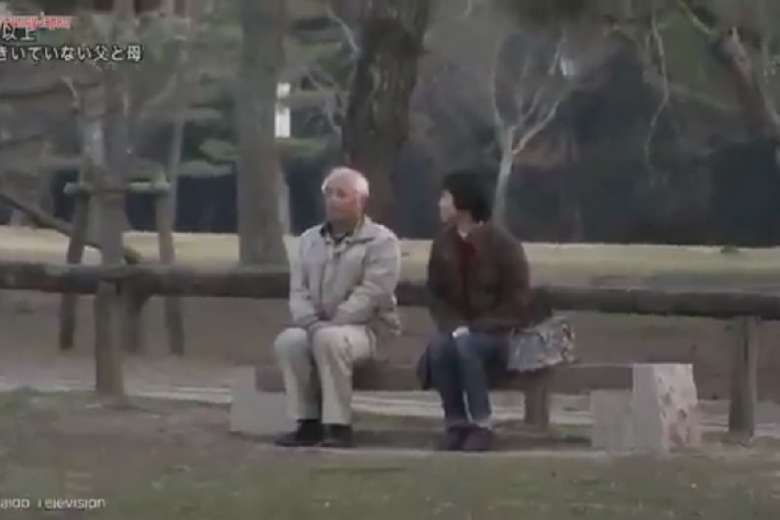