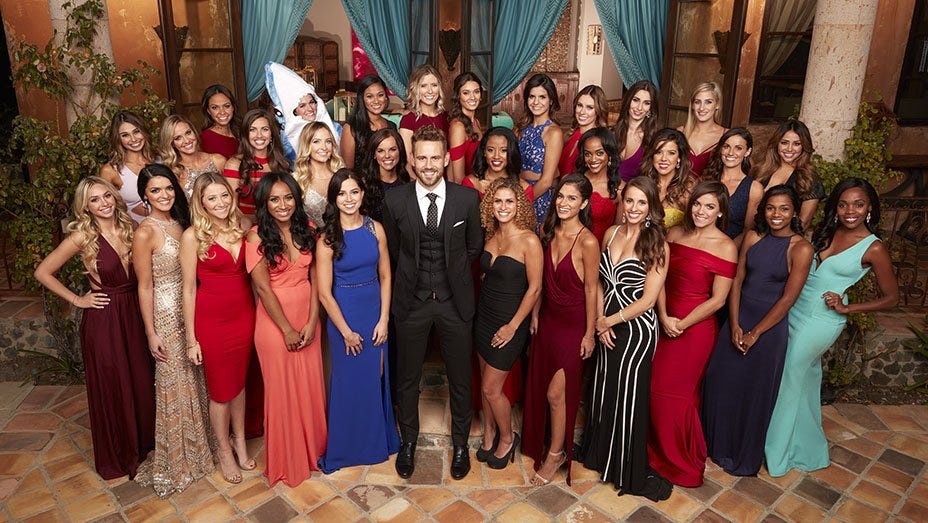 THR – There are many lucrative business reasons for the pimping out of unrealistic romantic love in American popular culture, but the plastic face of it is the trendy Bachelor and Bachelorette franchise. As entertaining as these shows are (and they really are compelling fun), there is an insidious darkness beneath the fairytale pabulum they are serving up.

So, what’s so wrong with a little harmless entertainment of watching people scramble for “love” like ravenous crabs on a washed up seal corpse? In the short term, nothing. Just good, clean fun. But the long-term effects of their choices — from the types of people selected to be on the show to the promotion of a subversive, childish concept of love — is like smoking or listening to Kenny G: it can have serious consequences.

With all eyes firmly fixed on firm buttocks, the criteria for finding love becomes how high a quarter will bounce off rock-hard abs. Will we ever witness a conversation that isn’t so bland and vacuous that words seem to evaporate as soon as they are spoken? The rest — intimate outings, group dates, visiting hometowns — is window dressing to disguise the establishment of a laundry list for love so paltry and insubstantial that nearly anyone with a hipster beard or pert breasts can make the cut.

So despite Bachelor fever seemingly sweeping Barstool in the last 24 hours, I’m not a regular watcher of the show and in fact chose to watch my alma mater win one of the best Rose Bowls ever played instead last night. But I’ve watched it in the past when coerced to do so by exes, found it enjoyable enough (moreso The Bachelor than The Bachelorette, anyone who willingly enjoys 25 idiot douches competing for the attention of an annoying chick over 25 hot psychotic women and only one loathsome idiot douche is simply not making good life choices), so I get the appeal. A lot of people watch, a lot of people talk about it on social media or around the proverbial watercooler, it’s a cultural thing more than it is a great show. People like going full Def Comedy Jam on every chick who steps out of the limo, the corny tropes, and it’s a rare thing women and men can share while mostly finding something everyone can enjoy. So overall I’d file the whole phenomenon as “pretty substantially overrated thing that a fuckload of people watch so who cares.”

But reading Kareem Abdul-Jabbar going OFF on The Bachelor and its spinoffs and seemingly blaming a shitload of society’s ills on a fairly innocuous reality show is the most Old Man Yells At Cloud of moments. If you pick apart any piece of media like he does in his article, you could pin a lot of bullshit on it. What about when the whole country was watching American Idol and buying into fantasy visions of becoming superstars despite obvious lacks of talent? Or even viewers seeing people on The Dating Game decades ago trying to pick a potential partner based upon how many shitty puns they threw out from behind a multicolored wall? Acting like The Bachelor is somehow changing the game and doing anything different for society when we’ve been doing versions of this for decades is a stupid opinion. We’re going to somehow be better people because some idiots aren’t getting fake engaged to other idiots on highly rated TV shows? Come on.

I mean hell you can do a much worse and sketchier version of the show on Tinder or Bumble every single night, at least The Bachelor makes you pick someone at the end and they’re guaranteed to have teeth and likely able to put together a coherent sentence. No one’s fucking without knowing the other person’s name on the show or shamefucking a pig before denying you left a bar with her to your friends, real life makes The Bachelor look like a fairy tale. Just a dumb take by Kareem. It’s almost like professional athletes are athletes for a reason and probably don’t need 1,000 word published think pieces on reality TV and the state of love.