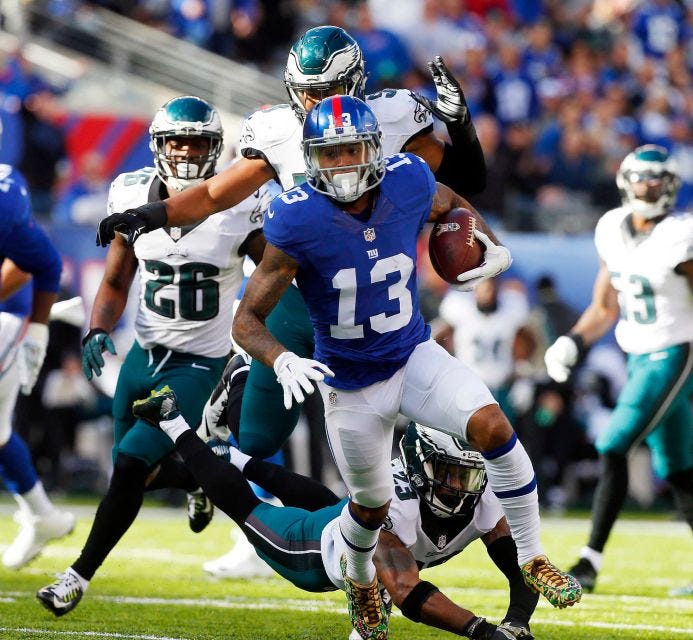 When the Giants schedule came out & had all three division rivals on tap for their final four games, all fans could hope for is that these games meant something – and here we are. After doubling down as the only team to defeat Dallas a couple weeks ago it’s now time to RSVP for the postseason in the most hostile of territories. Philadelphia.

There’s no denying the Eagles have had the upper hand in this rivalry recently and Big Blue’s last two trips to The Linc have epitomized that. Not only have they been slaughtered to the tune of a combined 54-7 in prime-time game slots but Giants fans will never forget when Cruz destroyed his knee during the 2014 blowout. It’s been a long road back & Senor Salsa hasn’t been the same but there’s no doubt the G-Men will want to rally for a heart & soul guy like Cruz in his return to the scene. He hasn’t gotten much attention from Eli of late but there’s gonna be some A+ salsa coming if Manning can find him for 6. In what might be the UDFA’s NYG swan song, I’m pulling for it big time.

This is essentially the Eagles’ Super Bowl though. There’s little else to play for after a 2-9 run spoiled a 3-0 start that had delusions of an ACTUAL Super Bowl running through Philly. Wentz was gonna lead them to the promise land, but the rookie has face-planted instead with 8 scores against 15 giveaways over his last 10. The Giants picked him off early & built a quick 14-0 lead back in Week 9’s win – we’ll see if the kid can give his home crowd what they want tonight. Although they can’t really play “spoiler” (the NFC would need one HELL of a wacky finish for NY to miss out), a victory over Big Blue would be another feather in the Eagles’ rivalry cap.

It’d be fitting for the Giants reclamation season to include their first Philly sweep since ’07. Remember ’07?

The opportunity to get over the hump against the Eagles & clinch on their turf is exactly what this squad needs to stay hungry as the regular season closes. You know Cruz & hometown boy Justin Pugh will have a little extra emotion about tonight’s game too. So let’s see the Giants get it done in style – with or without Jackrabbit. Stomp Philly while they’re down without giving them a shred of reason to flap their mouths. Shove some Big Blue holiday coal down the throats of the trash who throws snowballs at Santa.