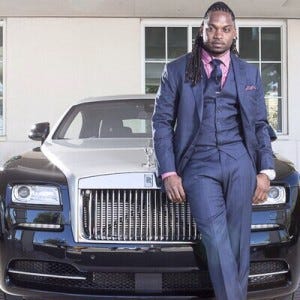 An old Patriots story just became public and it’s so good, I’m actually less entertained by it than I’m furious it took this long to surface. Because the world could have been enjoying this thing for the last 10 years. It’s about the time at the 2006 Pro Bowl when one of my all time favorite Patriots, Matt Light, duped one of the few Pats I never liked, Brandon Meriweather into thinking Bill Belichick would pick up his bar tab. Here’s how Light told the story to Toucher & Rich on the Sports Hub:

“I said, ‘Hey man, you do know that you can put all this on Bill’s room, right?’ Now you’ve got to remember, Belichick and the entire staff were coaching the AFC.’

“Now I go up there saying that just busting his chops. I didn’t really know what was going to happen, but I figured I’d plant that seed. He looks at me and he says, ‘Are you serious?’ And I’m like, ‘Yeah, man. You don’t ever pay for your drinks when your coach is here coaching.’ I’m like, ‘Come on. Come on, rook.’ So I walk away; I’m not thinking anything of it.

“Fast forward like four or five hours. I literally witnessed him walk up to Bill with his check, like the little card that has your bill in it, and hand it to coach Belichick and say, ‘Hey, thank you coach. I appreciate you,’ in a way only that he could do it. Like you could imagine what that conversation looked like.

“And I’ll never forget — Bill’s looking at him like, ‘What are you talking about?’ But Linda’s like, ‘Go ahead, take care of the tab. Help him out, right?’ It was the most uncomfortable awkward moment I’ve ever witnessed with coach.”

Godammit, Matt Light! How do you sit on that story and then just casually bring it up one day 10 years after the fact? First of all, the story confirms what I suspected during Light’s playing days, that he was to the Pats what Kevin Millar was to the Red Sox. The guy that kept everybody loose and confident and held the locker room together. Second, it confirms what I always thought of The Party Starter, that he was the dumbest, most unlikable Patriot since Terry Glenn. Just perpetually a terrible angle and a stupid, head-hunting penalty waiting to happen.

And now we find out he’s gullible enough to think the greatest coach ever has the time or the inclination to pay to get him shitfaced. And get a load of Linda. Typical girlfriend. I read her quotes and I can absolutely hear the Irish Rose’s voice saying “Oh, the poor guy. I feel bad for him. Why don’t you just pick up his tab?” Where every guy in the world – especially The Hooded One – would have told Meriweather to go piss up a rope. The fact that there’s no video record of the look on Belichick’s face at that moment is a national tragedy. As is the fact that Light is not in the media full time. Because the world could use more gold like this.