KFC locations in Japan now offer its customers a fix, called the “finger nup,” short for “finger napkin” RocketNews24 reported. But, admittedly, “finger pants,” or even “finger condom,” would be a better fit. A slender plastic film encases the thumb and forefinger — the digits most used to pull meat from the bone — acting as a glove, so customers can devour their fried chicken mess free.

Brilliant idea. I hate having greasy fingers when I’m eating fried chicken. I think this is a relatively safe space so I’m comfortable admitting that I don’t manicure my hands to the highest of standards. In fact, my hands are a mess. Chipped nails, hang nails, little flaps of skin on and around the cuticle. My hands are a disaster. I think the application of the finger condoms will be great for fried chicken, but it will blow the doors off of the buffalo wing market. 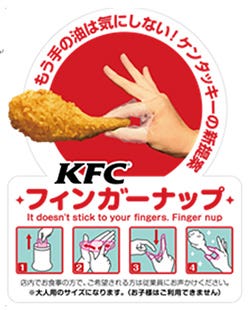 I wish it was socially acceptable to wear gloves while eating spicy chicken. The sauce gets everywhere and I can only be concerned about one body part at a time. I chose my area of focus to be my beard. If I’m not careful, I will have a beard that is absolutely littered with buffalo sauce. Getting sauce out of your beard hair with just a napkin or a dude wipe is next to impossible. Next thing you know, I’m rinsing my beard in the sink at the restaurant (which some asshole has probably pissed in) and I have hot sauce all over my hands and a wet beard looks like drippy wet pubes. Not an appetizing look for the rest of the patrons. All this could and will be prevented with finger condoms.

I’m all in on the finger condoms. Thanks, KFC (not the blogger).

PS: if you are at KFC, you could slip some extra finger condoms in your pocket and use them on butts that you’d usually be hesitant to finger. Just a thought.