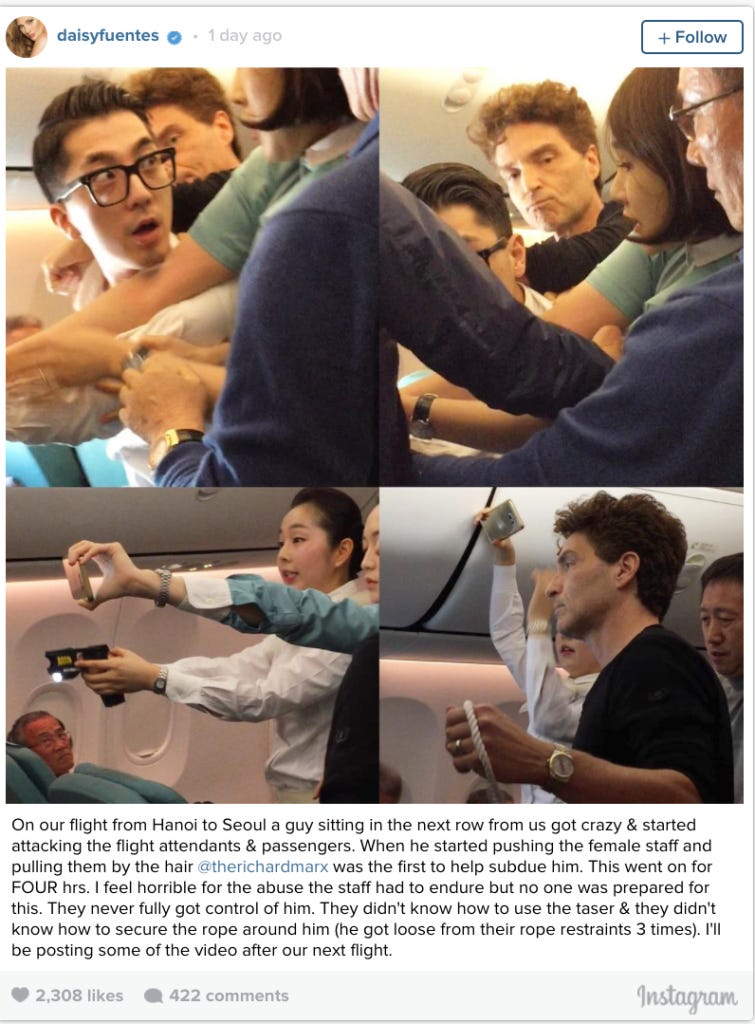 This nerdy son of a bitch is lucky that YouTube prankster wiped him off the front page for unruly airline passenger stories today because that is some weak ass shit. How in the hell do you let Richard Marx subdue you on an airplane unless its with his sweet, sensual voice? At least that I can understand. Those golden pipes landed him Daisy Fuentes, who was the queen of MTV back in the day. Sexy, cool, and always held her own in Rock N Jock. I know none of this makes sense to most of the #GoPresGo crowd, but trust me, these two people were once kinda important. And Richard Marx’s street cred is not exactly up there with Billy Idol. He wouldn’t have been able to put Glenn from Wedding Singer in a pickle using simply a beverage tray and a belief in true love.

And what’s up with the stewardesses on the plane not knowing how to use a stun gun or quadruple knot a rope to the point where the only way to untie it is to cut it? When I board a plane, I am going in with the thought that every employee on that flight can handle a weapon in case some shit goes down. Baddest bitch gets the real gun, everyone else a stun gun. And they all know how to use it. I figured that’s what all those stupid ass surcharges pay for. Gun range visits and state of the art weapons. I’ve never felt less safe with the airline industry than I do after reading this story. And it should go without saying, but can people just stop being assholes on airplanes? Nobody likes to travel in a crowded metal box after a shitload of delays and other nonsense. But the one thing you can control is yourself not being a crazed lunatic. We live in a goddamn society, people!

Now if you will excuse me, I need my Richard Marx fix for the day. Feel free to participate with me.