SI – Iowa head coach Fran McCaffery refused to shake hands with North Dakota’s staff and players and instructed his players to follow suit after a 84–73 win on Tuesday night for what he says was inappropriate play late in game.

Seconds later, North Dakota’s Corey Baldwin stripped the ball out of Iowa forward Nicholas Baer’s hand as he held the ball trying to run out of the clock. Baldwin passed the ball to forward Drick Bernstine for a layup, but the basket didn’t count as time ran out.

At the game’s conclusion, McCaffrey and his players then turned and made their way to the locker room.

As much as I love to fire myself up and take a firm stance one way or the other on things I have no problem with either side here. I can see it both ways. North Dakota playing to the final buzzer, having enough pride not to just lay down, getting in some final shots on the guys who had been chirping them all game, Corey Baldwin and Drick Bernstine trying to pad their stats a little bit for the post game box score review. Fine with me. And Fran McCaffery getting pissed about the unnecessary hard fouls on his guys and the lack of decorum and refusing to fake nice and give out handshakes is fine with me too. I mean forcing D1 athletes to line up and shake hands like 6 year olds in rec league is just a ridiculous thing in the first place.

“I wasn’t pleased with how the game ended and the things that happened,” McCaffery said after the game. “I’ll say this, I have a lot of respect for [North Dakota head coach] Brian [Jones] and [assistant] Jeff Horner. I don’t think they teach that stuff. But I was not having it. That’s not the way to play.”

Jones said that his players are not malicious and they wanted to compete until the final buzzer.

“We want to come here and play well,” Jones said of his players. “We want our family and friends to be proud of what we’re doing and be respected. I get the heat of it. It’s just the heat of the moment. Coach (McCaffery) is a high-character guy, I’m not blaming that. There were some things down the stretch that both teams could have cleaned up.” [SI]

I’ll tell you what, I do feel bad for #3 and #20 though. Whole highlight of being on the team and going through all those hard ass practices is to get a chance to shake hands with star players from big conference teams after the games end. 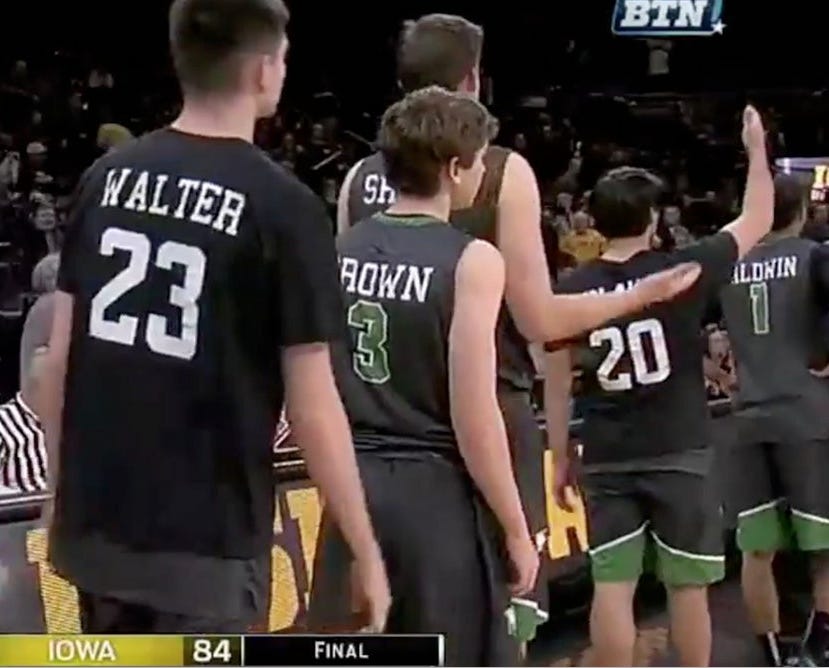 That’s rough. Been there.