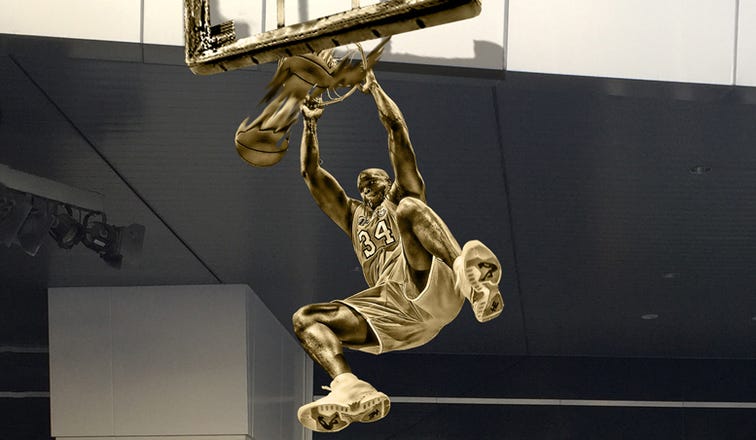 NBA.com- A bronze statue of legendary Los Angeles Lakers and NBA Hall of Fame player Shaquille “Shaq” O’Neal will be unveiled in Star Plaza at STAPLES Center prior to the Lakers game on March 24, 2017.

As a tribute to the larger-than-life Laker great, whose career with the organization produced three NBA Championships, the Los Angeles Lakers, STAPLES Center, and AEG organizations commissioned the creation of a 1,200 pound, nine-foot bronze statue of the NBA Hall of Fame member. O’Neal’s statue will be connected to STAPLES Center, suspended 10 feet above the ground, at Star Plaza.

Now THIS is a statue that captures a player’s essence. When I think of Shaq, I think of one of the most dominating basketball players in NBA history murdering motherfuckers by yamming it in their face with no regard for human life. Sure it would have been nice if the statue’s backboard looked like it was ready to break, but that was more of a Magic Shaq thing. Lakers Shaq was either the most imposing force of his era or a dude that had to play his way into shape throughout the season. Maybe the statue could look a little doughier in November but become the fucking Diesel again once May and June rolled around. And when the inevitable Kobe statue gets unveiled, I need the architects to place it where if you look at jusssst the right angle, it looks like Kobe is tasting Shaq’s ass. Because aside from the rings, the ridiculous numbers, and the nicknames, this is Shaq’s true legacy to the world.