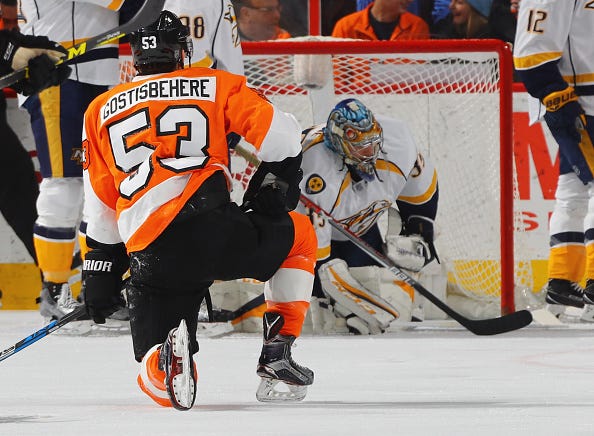 I miss the old Flyers. The 10-game win streak Flyers. The find ways to win late in the game instead of just playing to not lose Flyers. But last night’s game just didn’t have that feel to it. Sure, the Flyers still managed to get a point by taking the game to a shootout. Sure, they’ve managed to snatch up 21 out of a possible 24 points in their last 12 games. But that 3rd period last night looked like a team who was pretty comfortable with where they are in the standings and just decided to pack it in to make sure they didn’t lose in regulation.

As soon as Forsberg scored that goal in the 3rd to tie it up, it was all Nashville. The goal was a long time coming but Nashville was the aggressive team in the final 10 minutes of that game while the Flyers kind of just sat back. I love the 4th line. I think Lyubimov and Bellemare have been putting together some great games lately. But it’s a tie game and you have your 4th line out there in the last minute? Playing it a little too safe there for a team who still could have had momentum coming off their streak.

Anyway, I hate writing about losses. Still blog them because I’m a journalist and have a little thing called integrity and a set of balls. But let’s keep this one shorter and talk about a few things that need to improve.

Raffl – Giroux – Voracek can’t take any more defensive zone starts. They just can’t. They STINK in their own zone lately. Either Giroux doesn’t win the faceoff or if he does, they can’t get a clean breakout. Top line featuring two of the top talents in the league, and they get trapped in their zone frequently now. They get caught chasing, lose track of guys in front of the net. Just stop starting them in their own zone because rarely does anything good come from that recently. Unless the other team is changing lines and you have Voracek retrieving the puck from behind the net, these guys can’t breakout.

Now Pekka Rinne came into Philly last night and he stole one for the Nashville Predators. Played out of his mind last night after giving up the 1st goal of the game. With that being said… the Flyers’ powerplay was their X-factor during that 10-game win streak. Then last night they get a 5-on-3 for almost a minute thirty. A chance to add on to their lead and give themselves a little insurance, and they get nothing out of it. Like I said, Rinne is to blame for a lot of that. But still. They were just trying to get way too cute with the puck at times. Especially Schenn. Now I get why he would be a little hesitant to shoot out there. You have Giroux, Gostisbehere and Voracek out there with you. 3 of the best powerplay snipers in the league. You have a 2-man advantage and you don’t want to be the guy who takes a shitty shot when you could have sent it over one more pass to one of those guys. But Schenn had a few primetime chances on that powerplay that could have made something happen if he got a little more selfish and gave himself the green light to let one fly. They just left a lot of opportunities wasting out there last night.

This isn’t a knock on TK. But obviously the kid is snake bitten right now and he can’t buy a goal. You can tell there’s a little added frustration to his game now. He’s flying around all over the place which is great. But you can tell this goal drought is in his head a little. Kind of like Voracek last year. Once he pots home his next goal, he’ll be good to go. But until then, he’s just gonna be gripping the stick a little tighter.

AMac In The Building. Hi Haterzzzz

Andrew MacDonald still isn’t worth his $5 million price tag, and he’ll never be. But it’s been great to see how much he’s turned his game around since Hakstol healthy scratched Ghost for him about a month ago. Since then he’s been able to limit his turnovers, he facilitates the breakout well, pretty solid at not getting caught deep. All stuff that you expect to see out of one of your defensemen. Every once in a while he’ll catch an edge trying to skate backwards. Or every once in a while he’ll make an ill-advised pinch at the blueline. But for the most part, there’s been nothing about his game that they haters can point to and say he doesn’t belong in this lineup. Good for him.

2v1 in overtime and Del Zotto sells out with the LB + RB. Obviously Mike Ribeiro isn’t the most dangerous guy in the league coming down with the puck like that. And obviously he’s a selfish bastard who wouldn’t make that pass. But still a helluva play from Del Zotto.