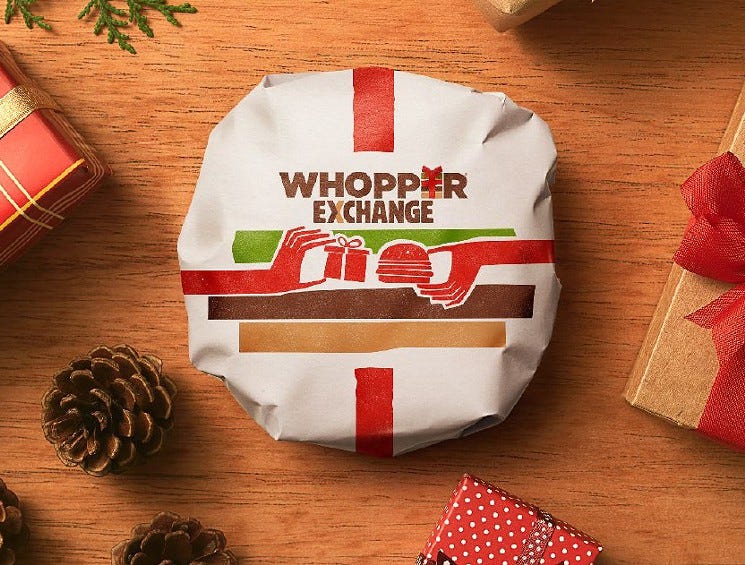 Food Beast- We pretty much can all relate to the awkward situation where we’ve received a gift we weren’t too fond of. However unwanted, we still manage to put a smile on our face and say thank you to the kind gift-giver, whomever it may be. If you’re really not about that gift, though, you can trade it in for a Whopper. This year, a Burger King in Florida is offering a sandwich exchange for any unwanted gifts. All you have to do is head down to the BK in Miami Beach, located at 910 Arthur Godfrey Road between 10:30AM and 5pm on Dec. 26 (the day after Christmas) with your unwanted parcel. In exchange, you’ll receive a fresh flame-grilled Whopper.

All the gifts Burger King receives will be donated to charity.

Now I’m sure that gifts I have given to people in the past have been regifted, tossed into a Yankee Swap, or just straight up thrown in the garbage unopened. But if I saw someone walk into a BK with a gift I had gotten them only to see them walk out with only a Whopper, I’d have no choice but to either slit my own throat with a candy cane or be less dramatic and go the Randy Moss route by only giving straight cash gifts.

And if you want absolutely nothing to do with your Christmas gift, just cut out Burger King as the middle man and donate the gifts directly to charity. And after you do that, spend a few extra bucks of your hard earned money on a better burger. It’s the holidays. Treat yourself to Five Guys or something. Just don’t trade in Christmas gifts for a motherfucking Whopper while Burger King acts like the crackhead from Menace II Society for some tax write offs.