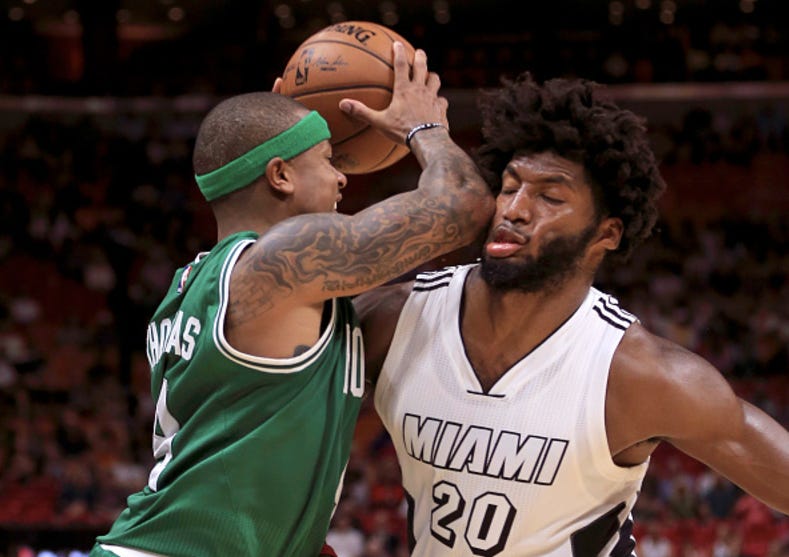 It’s no secret the Miami Heat are terrible. Beating a team like this is sort of a lose/lose if that makes sense. You need the win obviously, but if you get it, the effort is quickly discredited because of the opponent. If you lose it, lord knows the shit that type of stuff causes in this city. Fortunately, the Celtics showed up for this game despite spending some extended time in MIA, and their performance was yet another indicator of how this team looks when everyone is healthy. News flash, they’re pretty good. Now it doesn’t take a rocket scientist to know that some people will play the “Oh big deal they beat a Kemba-less CHA team and the Heat. Big fucking deal they still suck”. It’s OK, be nice to those people, they are starting to panic and reach.

The fact of the matter is, when the Celtics are able to use the lineup that they INTENDED to have to start the year, it’s actually as advertised. I have them down for 8-3 with a completely healthy roster, that when the original starting 5 plays together, they are by far Boston’s most productive lineup. The group has played a total of 135 minutes together, shoots the ball at a 49/42% clip, and are a +24 on the season. Offensively they have a 112 rating, and defensively 103. That differential ties them with TOR as the best in the entire conference. Essentially they are a drastically different team when healthy, which has been the whole point. So quick were people to freak the fuck out and demand Danny gut this whole team, all after barely seeing the team we intended to have play. Bizarre stuff.

Now when things go bad I preach all the time to be patient and not overreact to one outing, and the same applies here. Yes, since Isaiah’s return they have looked a LOT better, but it’s still early. We need to see this team play 15-20 games together before we can really have an idea of who they are. Having said that, it doesn’t hurt to see them win.

– Any fear that his groin injury might linger can for the moment be put to bed. Isaiah again was fantastic, and without him just like CHA, the Celts don’t win this game. A team high +12 on the night, his 23/4 in just 27 minutes was important for a number of reasons. First, Isaiah was extremely efficient, shooting 9-15 (3-5). He took shots within the flow of the offense, was aggressive as he always is, and despite only getting to the line two times, he was able to make an impact. MIA started the game with Dragic not covering Isaiah, which is smart since there is a negative infinity percent change he can stay in front of Isaiah, but it didn’t matter. His first quarter was perhaps the best he’s had all season which is weird, because Isaiah tends to struggle a little bit to start games historically.

There were so many plays from Isaiah that stood out, but there are a couple I think we should focus on. First, it really is incredible that a guy that stops the ball and kills ball movement pulls off plays like this

What a selfish player amirite?

But the best part of Isaiah’s night came in that fourth quarter. As they dropped close games in his absence all we heard was that the Celtics don’t have a closer, or a player in the fourth quarter they can go to when the game gets tight and they need a win. It’s almost as if the people who say these things have watched one second of an Isaiah fourth quarter.

Well, in just 6 fourth quarter minutes, Isaiah’s 10 points on 3-4 shooting (2-3) was exactly what this team needed after such a terrible third quarter made this a 7 point game. The Celtics seemed to be losing momentum and there was Isaiah to not only stop the bleeding, but push the lead as well.

– When it happens it’s a bit of a double edged sword, but the Celtics played a nearly flawless opening 12 minutes. I haven’t seem the offense look that good to start a game in quite some time. Anytime you score 37 points and shoot 65% from the field, you are doing something right. The best part was the good play was contagious, as anyone who stepped on the court played well. Brad went with his starters for a little longer than he usually does as a result, with all five starters playing at least 8:47 in the quarter. It shouldn’t come as a surprise they had this sort of output when you look a little closer. Of their 15 makes, nine of them came from the FT line and in. When that’s what the Celtics offense looks like, we all win.

– On the surface, there is a lot to love about Al Horford’s 17/7/8. The Celts made a conscious effort to get him the ball as his shot attempts were right in line with Avery/Isaiah, and this was another example of what I think Brad and Danny had in mind when they made this move. The spacing, the passing, the production, things looked fantastic this summer when they all started playing together, and that has translated into the winter.

But the story of the night for Horford for me, was how he came up big down the stretch in a fourth quarter when the team absolutely needed him. An area that has plagued him a few times so far in his Celtics career, last night Horford was NAILS. He had 11 fourth quarter points, and once Isaiah was ejected with 3 minutes left, and the Heat cut it to a 5 point game with 2 minutes left, here’s what Horford did.

What you love about this play is he worked with Smart to get the mismatch. This pulls Whiteside away from the rim, and essentially greenlights Horford to go to work. Tyler Johnson has no shot once Horford posts him up, and with Whiteside looming to block the shot if he goes up on the right side, Horford smartly uses the rim as protection for the easy basket and a foul.

A few possessions later, they went right back to the same P&R with Smart/Horford in almost the exact same spot. This time, Horford shows why he is such a valuable weapon and nails the open 16 footer, essentially ending the game.

Seeing Horford come through in moments like this are important because there are going to come times when he is going to be asked to make a play, and I prefer his confidence be at an all time high when he is.

– I am becoming more and more hesitant to include Avery Bradley in any sort of trade unless it is for a bonafide stud. So for example, not Gordon Hayward. I know his contract is up in a few years, and he is going to be expensive, but at 26, if this is the production that you are going to get on a consistent basis, that’s just as good as anything out there you could get in the open market. I think we are now at a point in which anytime Avery takes a jumper, or an open three, we expect it to go in. That is a WILD place to be considering where he was as a rookie, but his play don’t lie. Another solid offensive performance, and his man shot 3-10 on the night. Career year like you read about

– You certainly don’t hate he scoring from Jae Crowder (17 points), but what I liked most about his night was the work he did on the defensive end. His 5 steals were the most he’s had in forever, and he just felt more locked in. He inspired the #ACTIVEHANDS movement, and he led the charge again last night. When Crowder makes plays on the defensive end, everything about this team comes together. I wouldn’t exactly say his defense has been his strong suit this year, but if that is going to make a turn for the better, it will have a real impact.

Before we move on though, I do want to shed light on the improvement of Jae’s shooting. Going from a 44/33% shooter last year to a 48/39% shooter this year is the exact sort of jump you want to see. As long as his ankles don;t mess with him, his shot should only get better.

– It’s pretty simple. Hold teams to under 100 points and win. Celts now something like 11-1 when they do it. Shouldn’t be hard for a defensive minded team but what do I know.

– Hard not to be happy when you see Marcus Smart make a continuous effort to take his size and take it to the basket. Smart worked out of the post/drove a couple times in this game, and it’s no surprise that those were the only times he had success. I love his 6 rebounds and 4 assists because that tells me he was engaged in his 27 minutes, and if not for getting screwed on an end of the shot clock three, Smart didn’t take one!

– I can’t imagine more than a few people thought the Celtics would have more points in the paint, and more second chance points, but that is in fact a real thing that happened.

– How else are you supposed to determine who takes a technical FT?

– It was expected, but still brutal. The Celtics third quarter where they saw a 22 point lead crumble, was one of the most frustrating 12 minutes of basketball I’ve ever seen. The Theory does not fail, and when it hits, it fucking hits. Remember that third the other game where they scored like 28 points and shot 60%? Well this is the other end of that spectrum. A total of 19 points on 24% shooting, turnovers all over the place, lazy play, bad shot selection, God was it terrible.

– I would bet a lot of that above paragraph probably has something to do with Hassan Whiteside grabbing 13 rebounds in the quarter.

– Hard to imagine that while things were going so well for so long, that Jaylen Brown can only get 7:55 of action. That can’t happen. How do we expect him to grow if he doesn’t get minutes? I don’t hate much about Brad, but I loath this.

– One step forward, two steps back for Kelly. Last night was a situation where his hesitation hurt him, and when that happens he gets off rhythm and usually gives you empty minutes.

– Goran Dragic sneaky rising up the charts of Celtics killers. I have him firmly above Gerald Henderson, but behind guys Luis Scola and Jeremy Lin

That is what was called a Flagarant 2. The NBA defines that type of foul as

Does that look excessive? That’s a flagrant 1 play. Also, just connecting some dots, but it happened at 3 minutes, so I’m pretty sure it won’t be in the NBA’s 2min Report. Hmm.

– I saw that airballed hook from 2 feet away Tyler. It was horrific.

Sure doesn’t suck to play like shit for 2 months and find yourself in the 3 seed. The team appears to be turning a corner simply by playing together, and it’s big to start this road trip off with a win. Memphis has turned themselves into one of the better teams in not only the West, but the entire league, so winning there is going to be tough. The good news is they’ve dropped two in a row, so we may be catching them at a good time. Either way, as long as the Celts keep winning games they are supposed to, and the Nets keep losing, things are good.