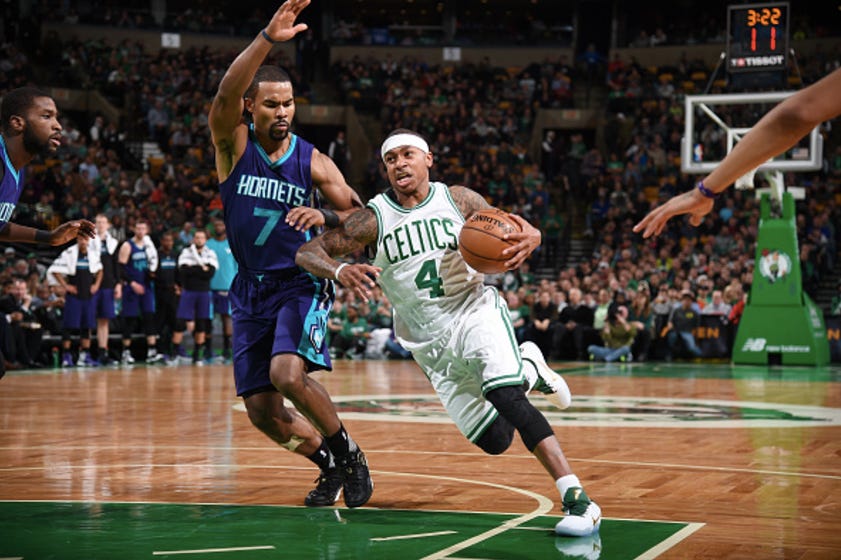 After dropping three straight, all of which were winnable games, it’s safe to say there was a good amount of tension heading into Friday night’s game against Charlotte. Not only was it important to win from a psyche standpoint, but also this game also had big time meaning when it comes down to head to head tie breakers. Everyone in the East 3-10 is essentially separated by a game or two, and every Celtics fan saw last year what happens when you get boned by a wild tiebreaker. Does it suck to lose to teams like OKC and SA? Sure, but since those are Western Conference teams, it’s whatever. If the Celtics want homecourt in the first round, they need to take care of teams in their own conference, especially at home.

It was also important because of the return of Isaiah Thomas. Safe to say a certain blogger was pretty amped after having to listen to all the noise since he went out after the HOU loss. Heading into this game I had four goals: 1. Isaiah to drop 30 2. Highest assist total of the year 3. Give a full 48 minute effort 4. Just fucking win.

Well, Isaiah had 26, their effort was pretty close to 48 min, and most importantly, they won. Three outta four ain’t bad. Here on planet earth, we saw why all this garbage about Isaiah being a 6th man, or this team being better without him, is so silly. You know what happens to this team if they don’t have Isaiah in this game? They lose to a Kemba-less Hornets team, and pressure mounts. When talking about getting a “star” the overall theme is you want to have a player that makes a difference. That imposes his will on a game and makes an impact down the stretch to win you a game late. Well I ask you, how many MORE times does Isaiah have to do this?

For those of us who are firmly on Team Isaiah, last night was pure vindication. There is still a shit ton of work to do for the ship to be completely righted, but we were all hoping for a big Isaiah night and a win, and that’s exactly what happened.

– Feels great to finally be back to normal, so let’s begin with Isaiah obviously. One of the biggest things this Celtics offense lacked in Isaiah’s absence, was aggression. Nobody took it to the rim, nobody got to the line, everyone just wanted to jack up threes for the most part. Well insert Isaiah into the lineup and the offense completely changes. Finally the Celts had someone who attacked the rim repeatedly. In what world is Ramon Sessions going to be able to stay in front of Isaiah Thomas, and he knew it.  Isaiah got to where he wanted, when he wanted, and after shaking off a little rust early, finished at the rim regularly. 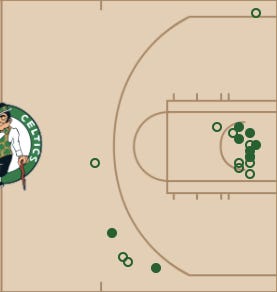 I mean look at that shot chart. If he wasn’t taking a three, he was taking a layup. The reason Isaiah is so valuable to this team is literally staring you in the face. In a game they had to have, this offensive ability put them in a great position. As is tradition in this blog, when you come back from missing four games, your entire night is presented uninterrupted

How about that move on Batum in transition? My GOD.

This past week there was also a lot of talk about how the Celtics don’t have a closer. A guy that late in the fourth quarter that you could turn to that would pull the game out. An odd stance to take considering Isaiah is one of the best fourth quarter players in the NBA, but who cares about facts, let’s go to the tape.

– As impressive as Isaiah’s night was, Al Horford’s performance may have been more so. Last night he became the first player this season in the entire league to have a night of 18 points 8 rebounds 5 assists 5 blocks and 2 steals. That right there is exactly what I dreamed up when they signed Horford. If this is the Horford we can get consistently (which has been the issue recently), this team is entirely different. He was everywhere on the defensive end, and he’s blocking shots at a much higher rate than I think any of us expected he could. The blocks are of a wide variety, you have some that are in transition, some that come off rotations, some that are classic “GET THAT SHIT OUTTA HERE”, and some that are strategic and kept inbounds and to a teammate.

What I loved most about his night was where he spent the night offensively. We saw Horford live on the block way more in this game than he did while Isaiah was out, and that’s nothing but positive. The CHA frontline isn’t exactly intimidating, and just like he should have done against David Lee, Horford was aggressive in the post and it resulted in buckets and FTs. If Horford is going to live in the scoring range we all want him to, he is going to have to get to the line. In games he gets 7+ FT like he did last night, he’s averaging 19 points a game. Well to get those FTs, he has to live more on the block. Again, what stands out is that in an important game the Celts really felt they had to have, they didn’t fuck around offensively with their best players.

– Speaking of Horford offense, where has he been hiding this stepback and how selfish of him to do so

– Not having Kemba Walker is pretty much 96% of why this was the case, but the Celtics defense was fantastic in this game. Right from the start they defended well, and in three of four quarters the Hornets shot under 38%, and if two of them it was under 28%. After struggling the last few games, the Celtics perimeter defense was much better, holding Batum/Sessions to 11-35 shooting. It’s hard to defend any better than holding a team to 13 FGs in an entire half. This was the effort I needed to see from the entire group in a game where they had a clear advantage. Again, they didn’t fuck around.

– I was really impressed with how many times Marcus Smart passed up what would have been a bad three point attempt for the right basketball play. I didn’t think that was something that happened, but here we are. If we are going to crush him when he takes him, we should give him his due when he passes them up.

– If you had Jonas Jerebko leading the team in +/- prior to this game, buy a lottery ticket. By far the most productive of any of the second unit players, Jonas played a big 25 minutes. This was the most Jerebko has played in any game this season, and I’ll take 9/3 on good percentages. Brad talked after the game about being flexible with Jonas in terms of spot starting him, and he does provide some intrigue if you start him at the four and Horford at the five.

– One of my favorite Twitter moments is when the Celts start slow and Celtics Twitter is melting down by halftime. Trade everyone! Brad stinks! This team is a joke! It’s almost sort of insulting based on all the hard work and research I’ve done over the last 2+ years. If you couldn’t see that third quarter coming, I honestly think you might be blind.

Please remember this and do yourself a favor and don’t freak out when the Celtics start a game kinda shitty. The Theory rarely misses.

– Psst…Tyler Zeller had a DNP-CD

– Not the best second quarter. The Celts didn’t really have an answer for stopping Jeremy Lamb, and the way the ended the half was absolutely pathetic. What sucked was things mostly went to shit once the starters came back in, wasting a pretty good Jonas shift.

– Yes I am concerned with how much attention Isaiah showed his groin injury throughout this game. Those injuries linger, and you could see him favor it after making certain moves. They need a blowout win in the worst way so he can just continue to rest.

– You know how we want to insert a fine for Marcus taking threes? I’m thinking we need to do the same for players who jump to pass. Isaiah in a way has set a bad precedent, and it’s contagious. I hate it. It’s maybe the stupidest thing you can do on a basketball court, and yet this team loves to do it.

– How scared were you when the Celts started 2-14 from three? I was pretty scared.

– I hate to say it, but Amir has gone missing again.

– Poor Jaylen Brown. Only 8 minutes in this one, all I want for him is to just get all the minutes. I want to see what he have when he gets consistent run. Where those minutes come from is the hard part, Jonas got a lot of em in this game, but man it’s almost time for a #FREEJAYLENBROWN movement.

So, after all the drama, all the panic, all the hot takes, the Celtics find themselves in the 3rd spot and 11-5 against the East. Even better is this team continues to win when it has its fully healthy roster in place. Maybe not people will start to RELAX and realize this team is actually pretty good on both ends when they are just fortunate enough to play together. Maybe hold off on all the “blow this team up for one superstar” talk and let’s see what we have over the next few weeks. As fun as it was to play at home, the Celts are now on a quick roadtrip to MIA/MEM/IND before OKC at home, so now is the perfect time for this team to get healthy.