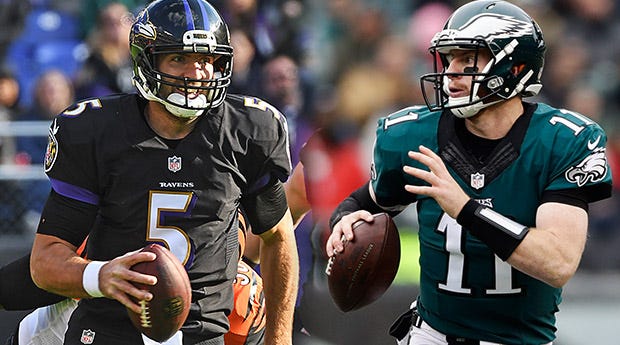 Reeeeeallly gotta have this one. Of course the Steelers game is by far the biggest game of the season, but the Ravens have to keep pace and keep the Steelers within reach first. This game looked like it was gonna be one of the bigger challenges of the season back in September, but the Eagles have fizzled out hard. Real hard. They’ve lost 8 out of 10 and they’re ripe for the picking coming into Baltimore.

There’s really only two reasons the Ravens might lose this game. One, obviously, is Jimmy Smith being out. For now, it looks like there’s zero chance he’s going to play on Sunday. While that’s not ideal and we don’t really know the severity of that ankle sprain, I can appreciate that he’s not trying to be a hero and forcing his way back for this one. But still, the guy is incredibly important to this defense. Think I’m kidding?

The one thing that eases my concern is that the Eagles receiving corps is pure dogshit. Matthews and Beckham-Green both have some size that we’d be missing without Jimmy, but they’re still nothing to write home about. I think we’ll survive.

The other concern, or at least according to some, is that there’s a growing rift in the locker room, particularly on the offensive side of the ball. There’s been plenty of honest comments made about the lack of hustle the offense showed down 2 scores late in New England. John Harbaugh made his thoughts very clear that that has been an issue that goes beyond that game, and even goes back a year and a half. He’s absolutely right, and it’s something that’s gone unfixed for far too long. The other testy incident, of course, was Steve Smith throwing his helmet in frustration during yesterday’s practice. This is claaaassic Jamison Hensley trying to make a story out of nothing. It’s such a non-story. Steve Smith is going to get frustrated and do these kinds of things sometimes. It just means he cares. If they’re not frustrated right now, that’s where you start to have an issue. That goes double when a competitor like Steve is fighting for his career. It’s no concern of mine, but it’s a narrative out there and if the Ravens find a way to lose on Sunday, that narrative will explode in Baltimore.

All in all, the Ravens will take care of business because they have to. They’re the better team, they’re playing at home, and they’re fighting for their lives. Beyond Jimmy, the team is as healthy as its been all year, and gets Alex Lewis back on the offensive line. That should only serve as more reason to run the football like I’ve been begging them to do all season. We’ll see. TCOB and go into Pittsburgh with some momentum and take the division. Please.