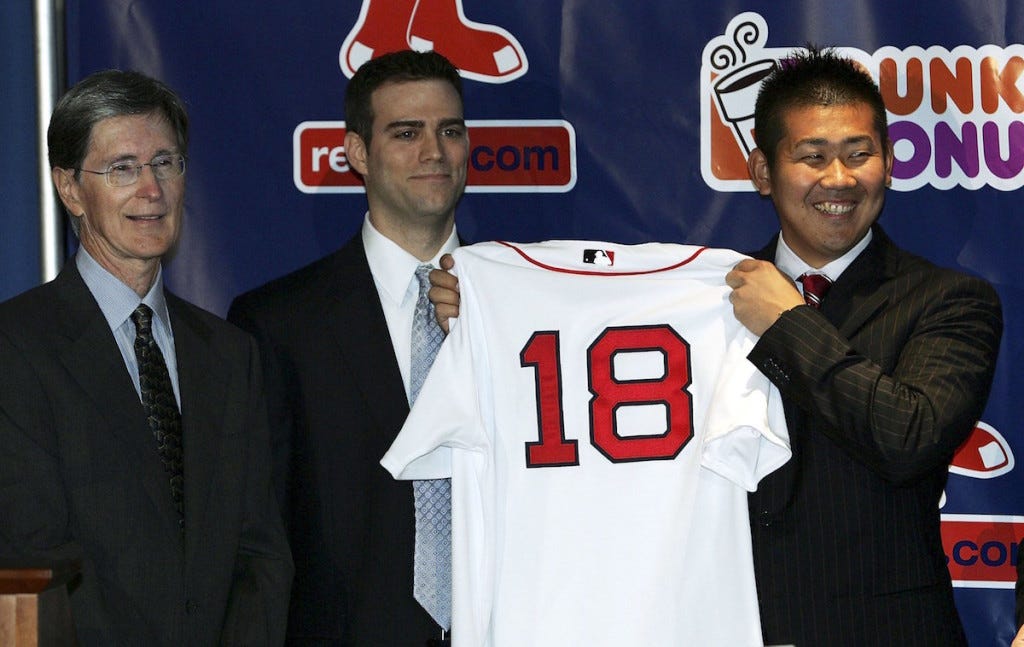 Don’t lie — you got caught up in the hype. We all did. I feel like everybody owned a Dice-K t-shirt before the dude even threw a pitch. And I mean, for all that money, which was a shit ton at the time (and still kind of is now), how could we not get caught up in the hype? The gyroball, man. The GYROBALL! The Red Sox lost Derek Lowe and Pedro Martinez to free agency after 2004, and, shockingly, David Wells and Matt Clement weren’t exactly equal replacements. Baseball’s a business, and most fans understand that, but nothing draws money quite like winning. Matsuzaka seemed like a great fit, given that he was supposed to be a perennial Cy Young candidate, and he drew more media coverage coming over from Japan than the Beatles did coming over from Liverpool. That just screamed international merch revenue.

It was looking good at first, too. I remember he punched out 10 batters in two of his first three starts, and I really thought he was going to be the real deal. After those first three starts, he made 113 starts in a Red Sox uniform. Guess how many times he struck out ten batters over that span. Once. It was in that first year, too. Overall, the contract was obviously a colossal failure, but those first couple of seasons weren’t all that bad. In his rookie season, he eclipsed 200 innings, racked up 201 strikeouts, and was fourth in the running for the Rookie of the Year award. His 4.40 ERA and 1.324 WHIP were gross, though. He also served up 25 bombs, and walked 80 friggin’ batters.

His 2008 season still aggravates the shit out of me, because fans will still point to that as some sort of great year because of his pitching record, which was 18-3. That’s a great record, sure, but if that’s all you’re looking at to evaluate his performance, then you’re doing it all wrong. His 2.90 ERA was misleading, too. A sub-3 ERA in the American League is great, but he was a fucking magician that year. I wish I knew how to look up how many times he pitched out of a bases loaded jam. Dude LOVED loading the bases and getting out of it somehow. That explains the whole great ERA, shitty WHIP thing. His WHIP in 2008 was identical to the year before, 1.324, and he led the league in walks (94), and hits per nine innings allowed (6.9). That, and he averaged 5.2 innings per start that year, always taxed the bullpen, and yet he still managed a fourth-place finish for Cy Young.

It was all downhill from there, assuming he was even up the hill to begin with. His last four seasons with Boston were marred by injuries and shitty performance. The right-hander went 17-22 with a 5.53 ERA, 1.537 WHIP, allowing 9.4 hits per nine innings and 4.5 walks per nine innings. His ERA was the third highest in the majors over that four-year span amongst pitchers with at least 50 starts, and his walks per nine was the fifth worst. He also sported the sixth worst WHIP.

Where is he now? Attempting a comeback in the Puerto Rican Winter League. From a high school legend in Japan, to one of the greatest pitchers in Nippon Pro Baseball history, to a $100 million man in the MLB, to the Puerto Rican Winter League. A man of mystery, indeed. Almost as mysterious as the gyroball. Still waiting to see one of those. After all the hype about the ace pitcher from Japan, I’d say his biggest contribution to the Red Sox was a two-run single in the 2007 World Series. God speed, Daisuke.