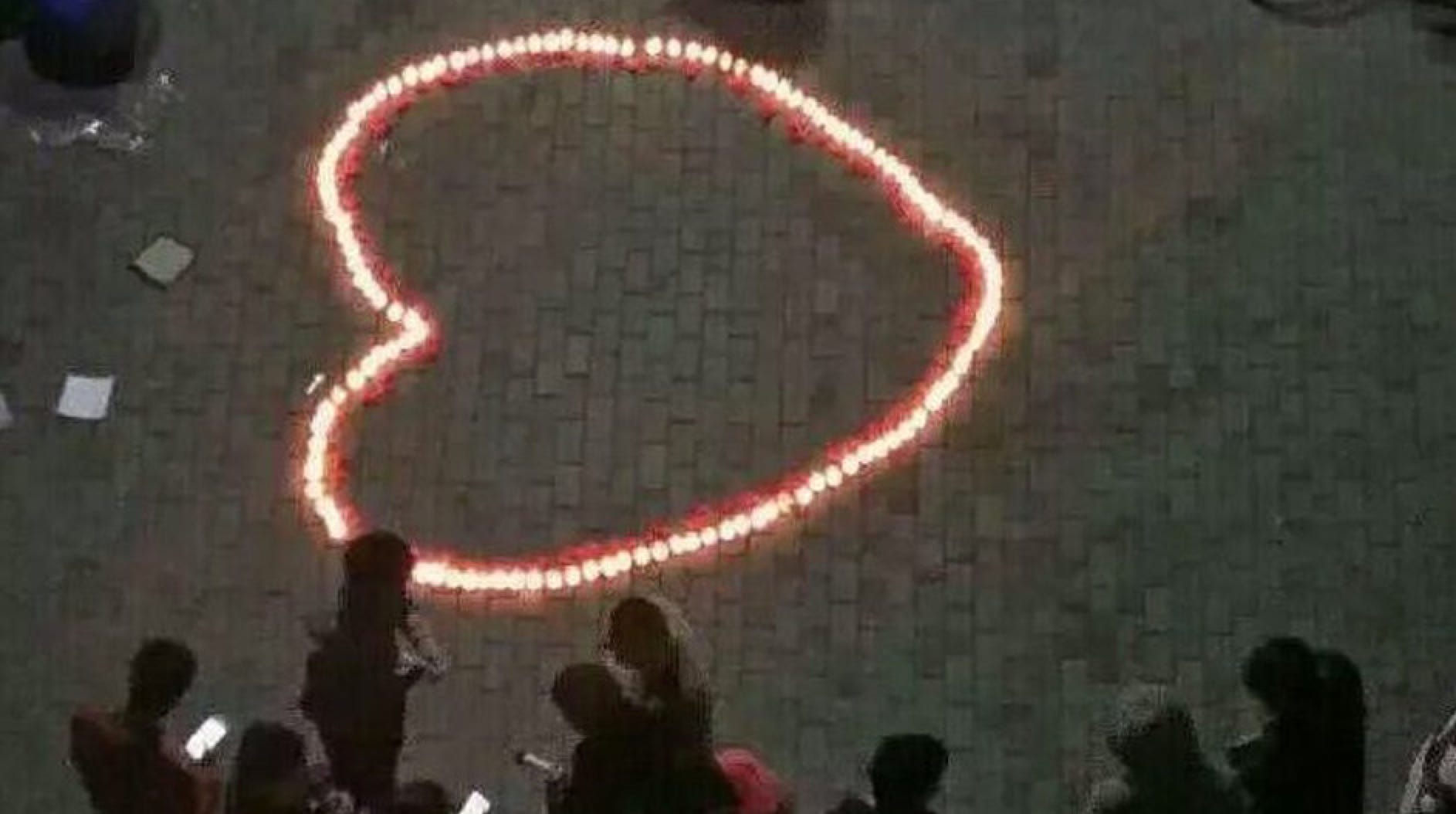 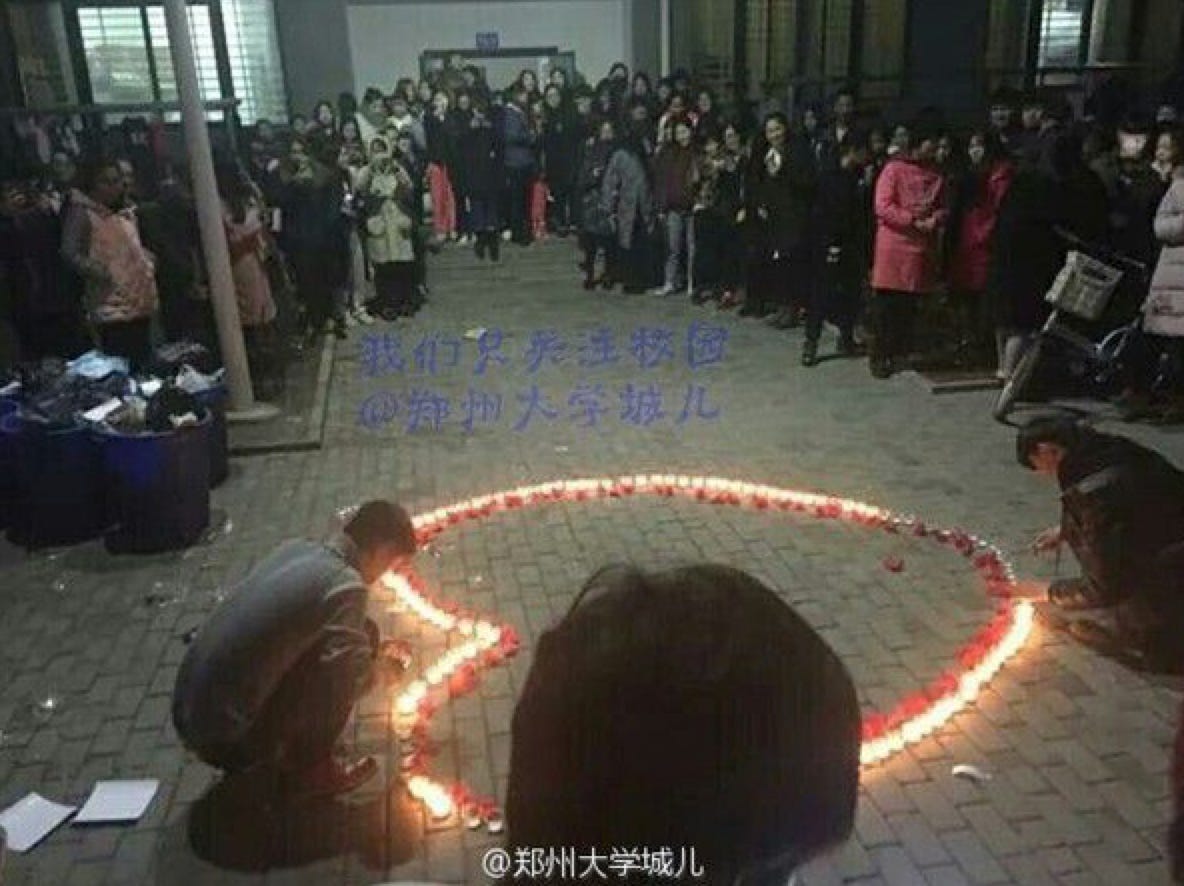 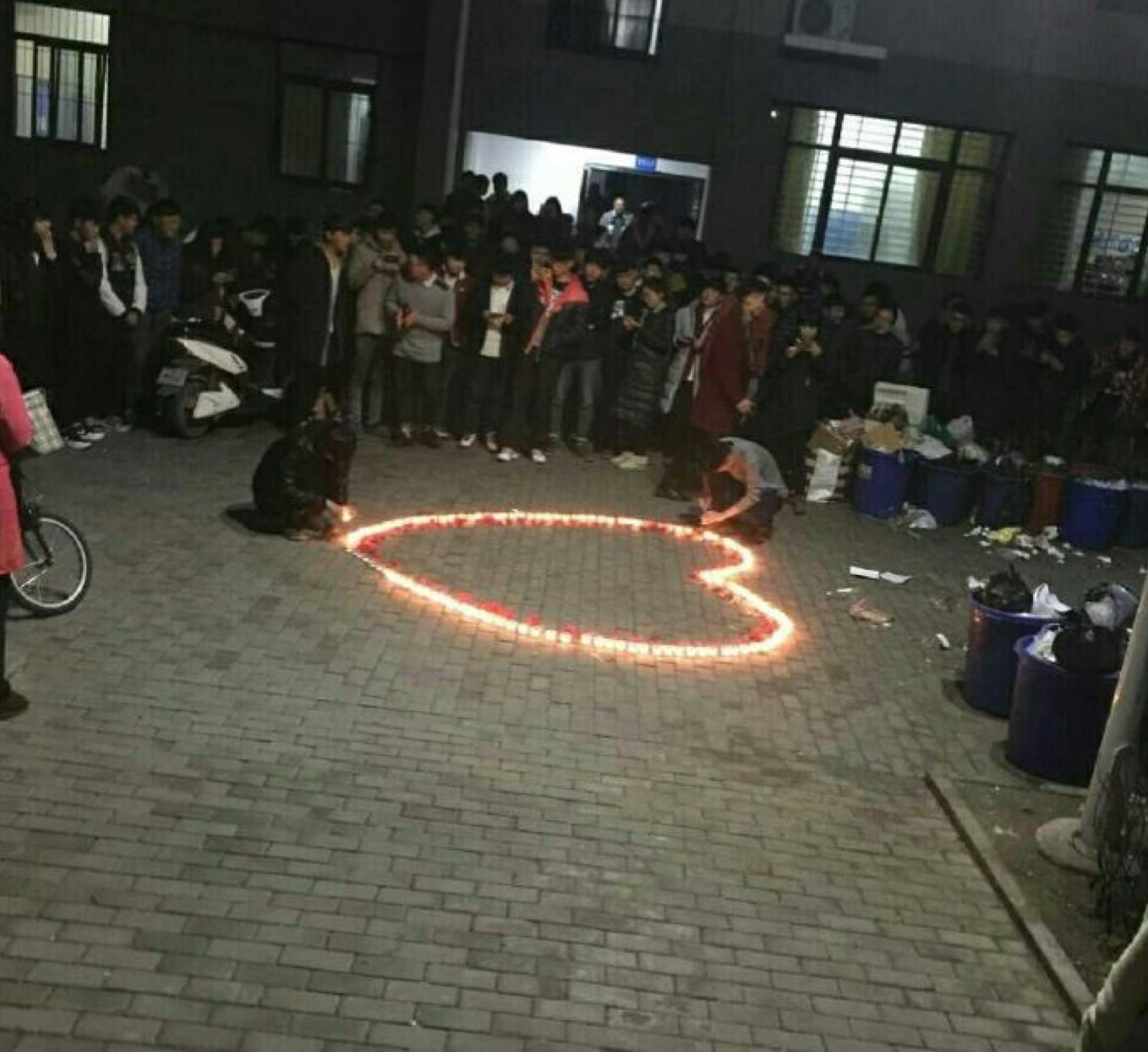 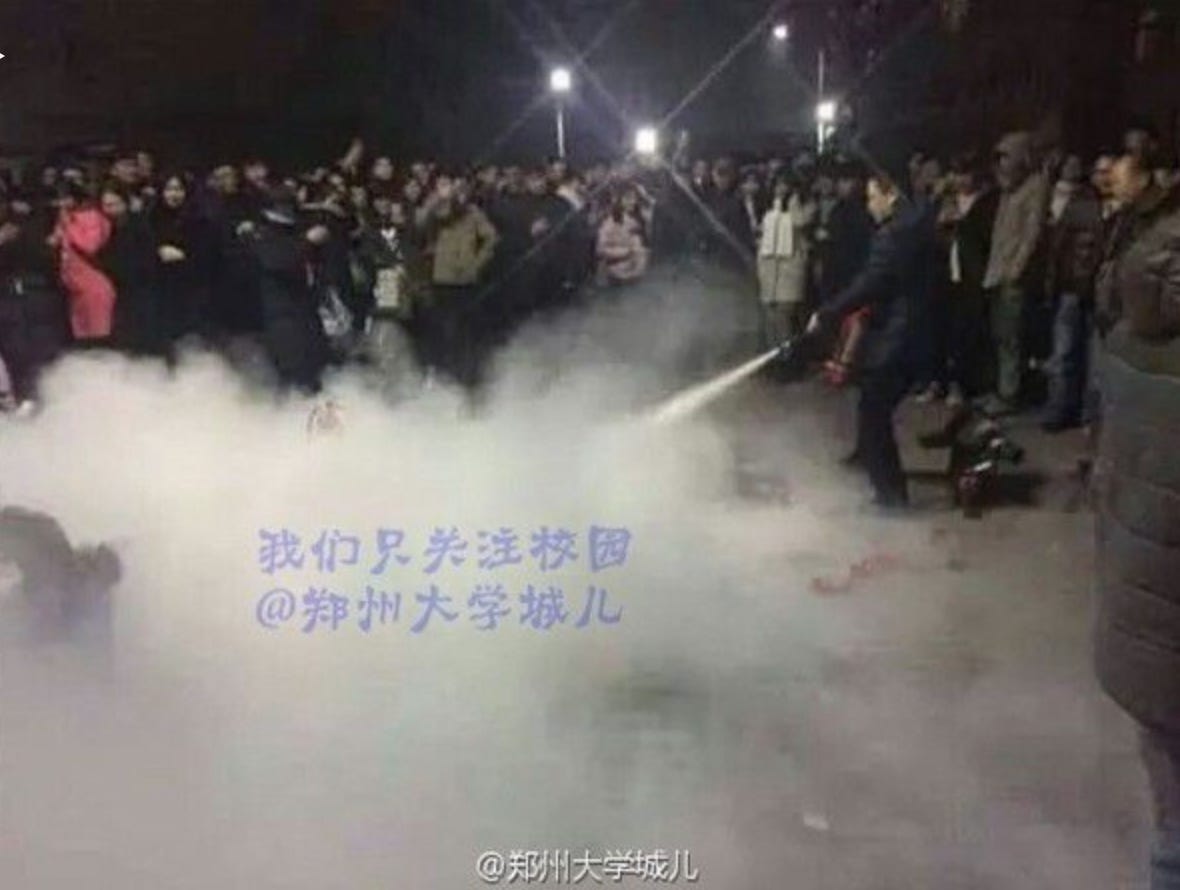 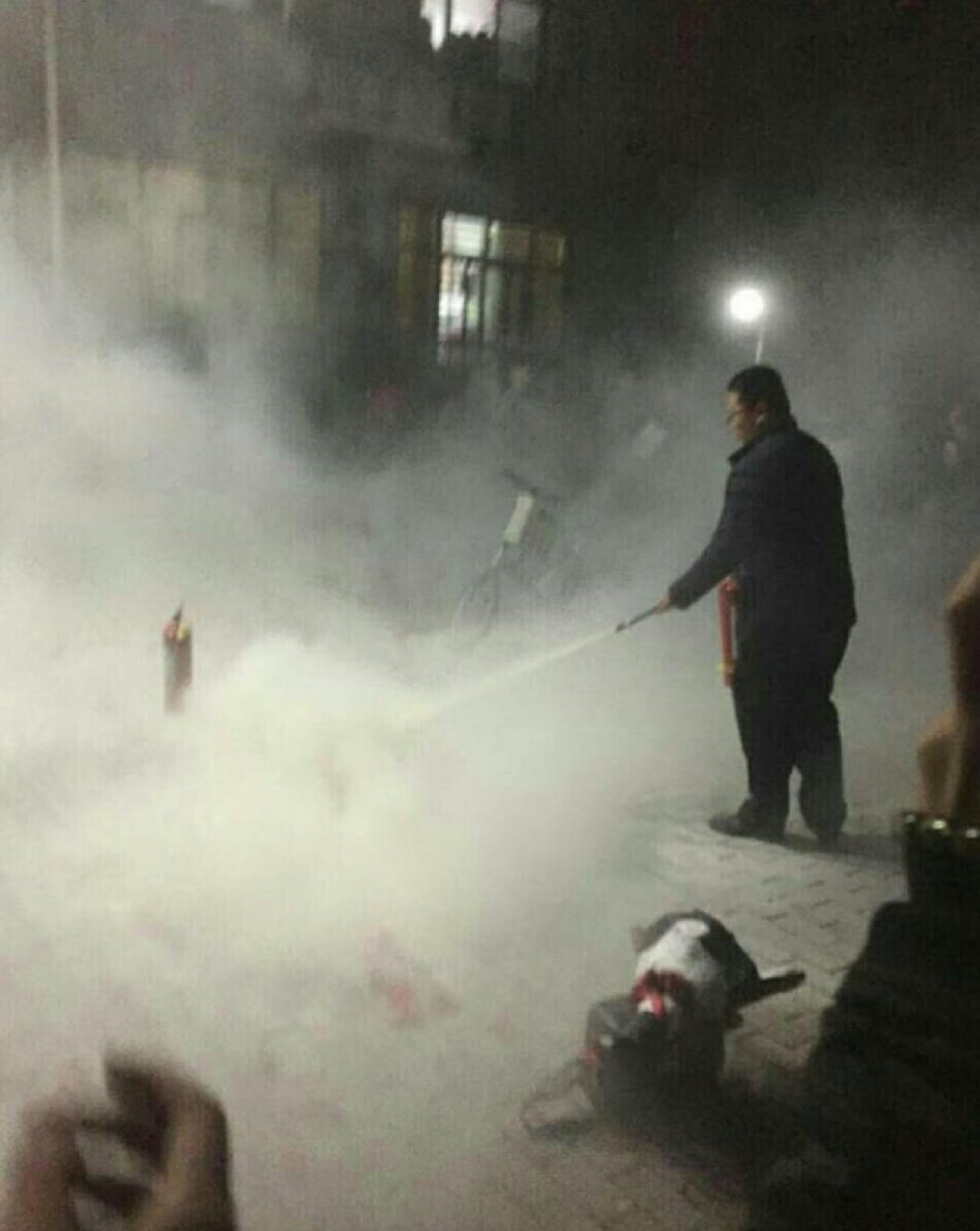 Mashable- It may be winter in the Chinese city of Zhengzhou, but this guy’s love still burns hot for his girl. The lovestruck college undergrad laid out a ring of candles and petals in the shape of a heart, at the dormitory yard of the Zhengzhou University of Finance. Unfortunately, security personnel didn’t seem to vibe with his public declaration of love, and showed up only to extinguish his flames in a big spectacle of smoke. His love interest hadn’t even arrived yet to witness his romantic gesture, according to people at the scene, who started circulating pictures of the event live on Monday night. A large crowd had gathered as he laid out the candles with the help of a couple of friends.

Just a laugh out loud series of pictures. At first I was mad that the person didn’t take a video of the ordeal but I actually think it works better as just a series of pictures. It goes from, “Awwww that’s a sweet thing to do for a girl” to “OUTTA THE WAY PEOPLE GOTTA EXTINGUISH THIS FIRE” within a matter of seconds. That is one overzealous security guard. Dude was just trying to win the heart of a young lady and he literally put the fire out. I’m on the side of the security guard (#squad) though. You can’t take any chances. One minute its an adorable gesture then the next minute it turns into a bunch of people running around with their hair on fire and it’s all the security guard’s fault. It was his duty to put that fire out and I commend him for it. We take an oath as security guards (we don’t) to protect and serve.

Look at this guy. I love him. He doesn’t give a single fuck about anything. 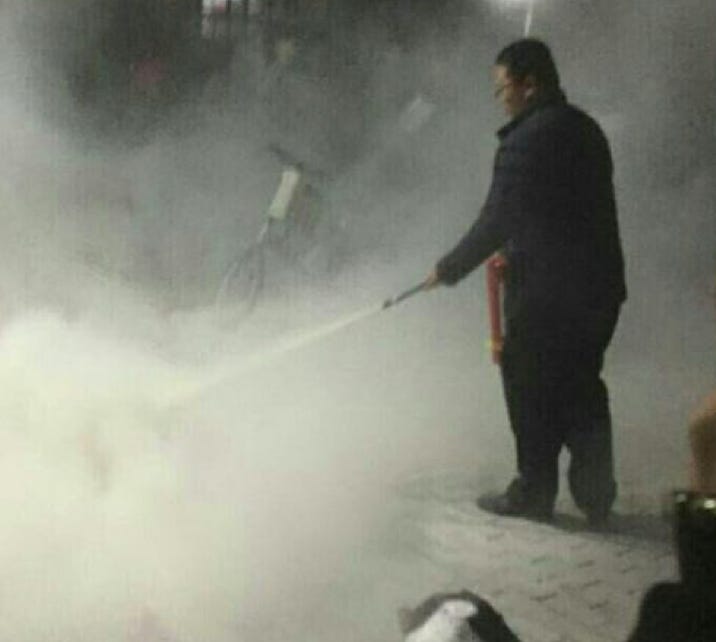