Okay so when I first heard Jim Renner won the Q School this weekend I wrote the following blog; 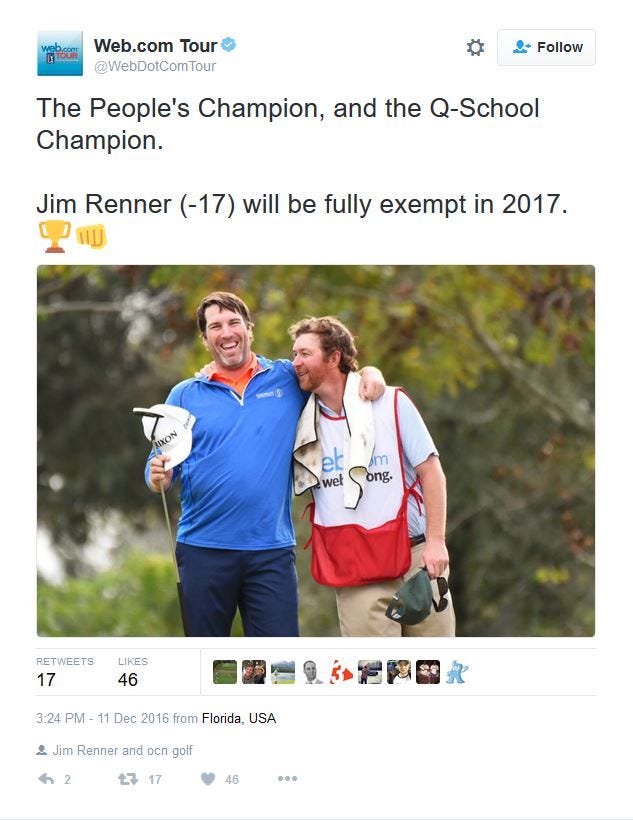 MOTHERFUCKING YESSSSSSSSSSSSSSSSSSSSSS!!!!!!!!!!!!!!!!!!     Right when you count out the People’s Golfer he shows up and wins the god damn Q School.  Listen ever since we met The People’s Golfer he always said he was saving his best golf for when he needed it the most.   Well today he needed it and today he gave it.  The People’s Golfer is back on the PGA Tour for 2017.   I am literally as excited as I’ve been for anything ever in my life.   Jim Renner is legit one of the best people I’ve met during Barstool and nobody deserves it more than him.   The Hartford Open can’t get here fast enough.  It’s probably sold out already and tickets aren’t even on sale.  Seriously we may have 10,000 people in Renner’s Army this year.    So fucking happy.

Then I found out he only qualified for the Web.com tour again.  Listen it’s still a HUGE victory for the People’s Golfer because it keeps his career alive, but it’s still the minor leagues.  Just a huge swing of emotions for me.  From top of the world to crashing back to earth in a nanosecond. And frankly I’m pissed.  Riggs told me they changed the rules for this in 2013.  It used to be that if you won this tournament you automatically qualified for the PGA Tour.  Umm that’s how it should be.   The fact the People’s Golfer is getting screwed here is infuriating.  It’s also so Jim Renner it hurts.  Nothing comes easy for the People’s Golfer.  The Travelers in Hartford needs to give Jim Renner a celebrity exemption and if they don’t I say we burn the Hartford to the ground.  (Metaphorically speaking of course)